★★★
Pros: A wonderful story line full of humanity and imagination.
Cons: Alexandra Krassa’s depiction of ten year old Ailsa Thomas was unconvincing at times, preventing much of an attachment to the character.
Our Verdict: A captivating performance which uses physical theatre to convincingly place you in an imaginary world. It also involves some very exciting shadow puppets.
One of the many joys of visiting the Blue Elephant Theatre is that you never know quite what to expect. Their speedy production turnover means that this small venue has a vast wealth of variety in all performance elements. This week’s piece was a work-in-progress performance of No Man’s Land, Glass-eye Theatre’s new tragic-drama depicting the London of the First World War through the eyes of ten year old Ailsa Thomas. The company was founded by graduates of London International School of Performing Arts (LISPA), an institute which works primarily in the field of physical theatre, movement and mime, all of which are brilliantly effective in this new devised piece.
Before the outbreak of World War One, Ailsa Thomas has a seemingly unbreakable bond with her father, Sid, formed over their shared dreams of flying above the city of London. When war breaks out, Sid leaves to serve in the Air Corps as a lookout on a Zeppelin. In her father’s absence, Ailsa grows to rely on the independent radio broadcasts of Alfred Moon, a beautifully bumbling example of upstanding British propriety. Sid returns from the war a broken man, quivering and frightened of his little girl. Ailsa retreats to her imagination, taking Alfred Moon to the No Man’s Land of the sky, where she believes her father has left a part of himself. When she finds him, she is faced with the decision of living in the perfect fantasy, or a broken reality.
The characters are individually introduced in the play’s opening moments, each accompanied by a plucked note on the double bass (the play’s only source of music or sound besides the actors themselves). The first words are spoken by Ailsa (Alexandra Krassa), who reads an introduction of her character from a postcard in Spanish. As an opening this was slightly confusing. The brief moment of Spanish, before another character stepped in and translated, seemed to have no subsequent significance, other than perhaps attempting to explain the Spanish accent Krassa maintained throughout the production, damaging the believability of her London-bred character. Her body language was more in-keeping with Ailsa’s age, however, clutching at her dress in moments of anxiety and gazing around in shameless wonder at her imagined world.
Body language and use was, in fact, a winning feature of the whole piece. Using just themselves and a few simple props, the five-strong cast create an imagination on the stage which, with some suspension of belief on the part of the audience, transports you into a fantastical world not unlike that of Jim Henson’s 1986 film Labyrinth. Most convincing and comfortable with movement was Alfred Moon, played by the hilarious Richard Keiss. At one point I found myself shaking with laughter at his troubled journey through a small gap in a pile of crates, seeming only to be made using his clenching fingers. A simple action, you might think, but the facial expressions and strenuous noises accompanying his brilliantly timed entrance onto the stage made for very enjoyable viewing indeed.

Greg Gottlieb’s score for solo double bass, performed by JJ Stillwell, was well suited to the nature of the performance, relying on simple techniques such as plucking the strings or drumming on the wood of the instrument, to effectively portray a mood or an action.

All things considered, No Man’s Land is a touching piece with strong moments of humour to make the Thomas family’s loss more bearable to engage with. The use of mime and movement was fluid and effective, and the acting strong for the most part. Very impressive, given that I saw them on the opening night of a work still under development. The production leaves the Blue Elephant Theatre on the 30th of March, but will be popping up again across London, so keep your eyes peeled. With a few more performances under their belt, No Man’s Land will not be one to miss.
Please feel free to leave your thoughts and opinions in the comments section below!
No Man’s Land runs at the Blue Elephant Theatre until 30th March 2013.
Book online at http://www.blueelephanttheatre.co.uk/no-man%E2%80%99s-land
Alexandra Krassa Blue Elephant Theatre Glass-eye Theatre Greg Gottlieb JJ Stillwell No Man's Land Richard Keiss 2013-03-29
+Everything Theatre 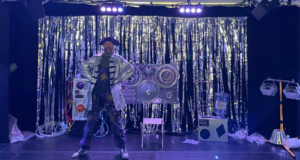