Nobody can deny that The Old Vic, located by Waterloo Road near the Southbank, is one of the most prominent theatres on the London scene. With its consistently high-quality productions, great location and grade II-listed building, The Old Vic is a refreshing and exciting alternative to the West End, a fact that few would disagree with. What many people may not know however, is that from its humble beginnings as a second-class theatre in 1818, and via a tumultuous and unsteady history, The Old Vic effectively seeded the modern face of theatre in London, acting as a catalyst for the creation of a host of institutions, including the National Theatre itself, and as a nursery for budding theatre giants, from Laurence Olivier to Judi Dench.
HISTORY
The Old Vic was originally founded nearly 200 years ago, under the patronage of Prince Leopold of Saxe-Coburg and his wife, as The Royal Coburg Theatre, a fringe venue (a ‘minor theatre’) which was forbidden by law to show anything but pantomime, melodrama or comedy. In 1833 it was renamed The Royal Victoria Theatre. Described as ‘a licensed pit of darkness, a trap of temptation, profligacy and ruin’ during the 1850’s, the theatre was renamed and closed down several times (bearing a colourful list of names, from The New Victoria to The Royal Victoria Hall and Coffee Tavern). By the 1880’s, it was already known colloquially as The Old Vic, and it began its rise to prominence under Lilian Baylis, who managed the theatre and its Company from 1912 until 1937. During the war, the venue was badly damaged by the Blitz, and the Company, now lead by Laurence Olivier, began touring the country until 1944 when they returned to London’s New Theatre (now the Noel Coward Theatre). The Old Vic officially re-opened in 1950, and the Company became the National Theatre Company in 1963 under Laurence Olivier. This Company remained in residence at The Old Vic until the National Theatre was opened 13 years later on the Southbank. The Old Vic was restored in 1985, but was then put up for sale in 1998, when it was bought by a charitable foundation that was founded in its honour. The venue regained its own Company in 2000 when Criterion Productions became The Old Vic Productions, with Kevin Spacey as its artistic director since 2003.
OFFSHOOTS
As if being the very birthplace of Great Britain’s very own National Theatre wasn’t enough for The Old Vic, the venue also acted as a nursery for the birth of many other institutions. These include a school (Morley College, which taught inside the theatre until the 1920’s) and even the Saddler’s Wells Ballet Company (which was co-founded by Lilian Baylis and performed in The Old Vic until 1935). The Young Vic, now independent, began as a branch of The Old Vic Theatre School, and The Old Vic, Bristol was founded by a branch of the theatre’s Company which, as we know, also went on to found the National Theatre. The current Company, The Old Vic Productions is now a major player not only in London, but nationally and world-wide, with their productions and co-productions (which include Jerusalem, and Billy Elliot: The Musical) becoming household names.
PEOPLE
With such an illustrious history, it is no surprise that many of the big names in modern British drama began, or at least enhanced their careers in The Old Vic. Baron Laurence Olivier is an obvious example, but other legendary characters who have performed at The Old Vic include Sir John Gielgud, Dame Judi Dench and Sir Alec Guinness. Household names like David Suchet, Peter O’Toole, Anthony Hopkins, Jeff Goldblum and Sir Ian McKellen have also passed through it, and let’s not forget the double Oscar-winning actor Kevin Spacey, who is now at the artistic helm of this remarkable venue.
OUR OPINION
For a venue which started off as a second-rank fringe venue, was blown apart by German bombs, and which was once menaced by reconversion into a Pub, The Old Vic became the world’s first National Theatre, and is now arguably one of the most influential venues in modern theatre. A place with such a rich and vivid history well deserves the recognition which now befalls The Old Vic. It is a unique and very special place to watch Theatre, and London wouldn’t be the same without it. Places like this are one of a kind.
To find out more about The Old Vic go to www.oldvictheatre.com/.
Kevin Spacey National Theatre The Old Vic Venue Profiles 2011-03-14
+Everything Theatre 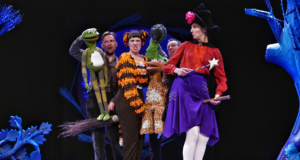