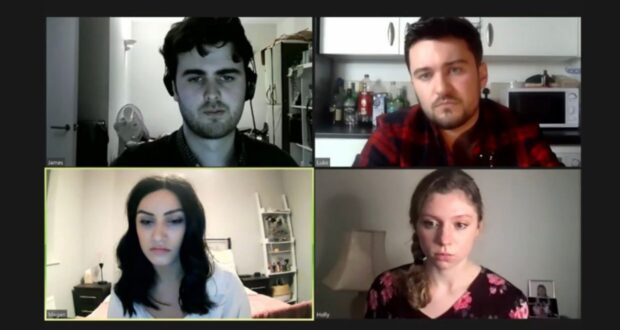 Having gorged on some fantastic free shows from online@theSpaceUK recently, my expectations were high for Broken Link, a show made specifically for the digital-heavy Living Records Festival. The fact that all shows within it are ticketed also meant expectations were greater, because if we’re paying for it, to me it has to be worth more than free content. Broken Link sees four friends who normally meet up yearly on the anniversary of Ellie’s suicide. Except this time lockdown means they can’t meet in person so they decide instead to do it over Zoom. As the four talk and share&hellip;

A well made production, but its clever technical approach distracts more than adds to the experience, and ultimately it feels like a disappointment.

Having gorged on some fantastic free shows from online@theSpaceUK recently, my expectations were high for Broken Link, a show made specifically for the digital-heavy Living Records Festival. The fact that all shows within it are ticketed also meant expectations were greater, because if we’re paying for it, to me it has to be worth more than free content.

Broken Link sees four friends who normally meet up yearly on the anniversary of Ellie’s suicide. Except this time lockdown means they can’t meet in person so they decide instead to do it over Zoom. As the four talk and share obituaries, you begin to wonder about the relationships binding them: clearly they were childhood friends, but are they now simply ‘together’ because of Ellie’s death, or is there still more to their friendship?

Things take a sinister turn when their four-way Zoom meeting is gatecrashed by a mysterious fifth, faceless presence who doesn’t talk, but instead pings messages around, both to the group chat and to each individual via private text messaging. Is it someone there to play with their heads, or is it the ghost of Ellie, come to find closure with them all?

The problem is that all the pieces just don’t add up to make a fulfilling production. What initially appears to be a play about friendship and grief turns into a mystery, as we wonder about this new fifth person. Except the thriller element quickly dissipates, as they all readily accept it’s their dead friend come back to them via this electronic means. The fact they seem happy to do that and just move on, well, it leaves a big question mark over it all. Then as ‘Ellie’ pushes each to confront home truths, it feels a little too forced, as if whole sections had been removed to condense the play down to under an hour.

What really doesn’t help is the dual-screen presentation. It is clear a lot of thought and effort has gone into it and it is clever, but clever doesn’t mean necessary. You’re asked to scan a QR code on the computer screen with your phone, so you can “receive texts along with the friends”. It transpires this is another video which plays on your phone, synced with the main film. As the action unfolds on your computer screen, you then become privy to private text messages between each character and Ellie on your phone. As the play progresses, in the corner of my eye I see movement on my phone screen as new messages are typed, private responses to matters discussed in the open. But if anything, it is distracting, taking my focus off the unfolding story, and quite possibly causing me to miss vital elements. I’d much rather have seen these private conversations pop up on the computer screen beside the individuals they were taking place with, then at least my focus would be on one place and not two.

I really wanted to like Broken Link, and at the outset it held much promise, as it explored issues of friendship and grief. But come the end, I’m glad it’s over; there is a real sense of disappointment at how it panned out, and I’m almost annoyed at the distractions of trying to follow it over two screens. It’s more than possible this clever approach will appeal to others: maybe I’m just a Luddite and this simply wasn’t made for me. But I can’t help feeling the trickery was all rather unnecessary.

Broken Link is playing as part of The LivinG Record Festival, a festival of digital media designed specifically for streaming. The festival runs until 22 February. See website for more information.

Previous: Review: How Do You Make a Cup of Tea? – online (YouTube)
Next: Review: The Same Rain that Falls on Me, online@theSpaceUK