Home » Features and Interviews » Interview: Georgie Bailey ties us in knots with Tethered 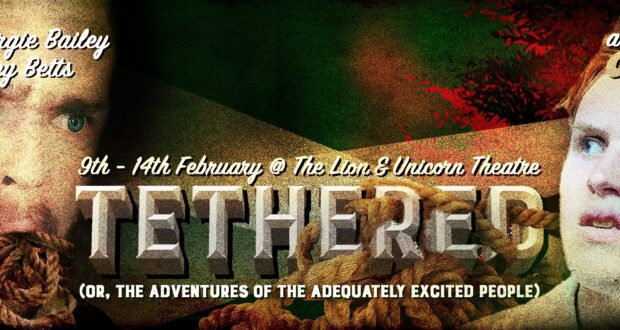 Author: Everything Theatre in Features and Interviews 16 December 2020 0 35 Views

Tethered, Or The Adventures of the Adequately Excited People, seems to be another play that is going to play havoc with our word count (see also How to live a jellicle life: life lessons from the 2019 hit movie musical ‘cats). But long name aside, we’re always more than pleased to chat to anyone crazy enough to be planning a show right now. And for that reason, we thoroughly enjoyed catching up with Georgie Bailey, Artistic Director of Chewboy Productions, to find out more about the play and whether our GSCE French is at all relevant to anything.

First things first then Georgie, tell us what to expect with Tethered.

Tethered is going to be a madcap, bizarre, run-around hour of surreal theatre. You can expect printers with prophecies to deliver, a lot of strange words inspired by our current language and (most importantly), balloons and party hats for all. As if two characters being tied together wasn’t enough, there’s also this idea of the audience choosing the order of their story, which is both terrifying and exciting for us as actors. Expect a big adventure and treat everything as more than meets the eye. There’s a lot of content covered in an hour, and the piece gets very child-like and silly in a very comedic way at points, but then suddenly diverges into more serious, poignant and poetic points. Oh, and you can definitely expect to see a lot of fun being had with this huge old rope we’ve got. A whole lot of physical comedy is coming your way at the Lion and Unicorn folks…

How will the audience get to decide the order then? And does the running order of the two halves effect the outcome?

We’ve actually had a lot of fun with devising how best to let the audience decide which half they see first. Initially, we were going to use a coin flip, then realised COVID was a thing and that it might not be the best option to go with a sweaty coin getting exchanged between sweaty palms. So, we went through a few different variations of what could happen and are still experimenting with it now. It might change every night, but at the moment we’ve got a big game of splat taking place, where both characters represent Half A and Half B (sums up the play, really). The audience decide a category and the two actors are pitted against one another; determining the victor through playing.

We also tried a thing called a moo-off, a show of hands, a mind-reading exercise and a short, sharp game of twister. Anything could happen… And yes! The order determines how you view the play and how things pan out for the characters. It’s quite a cyclical play in that everything has a place and makes sense between Parts A and B, but your opinion and perspective of the characters and this bizarre situation alters quite dramatically depending on the order you experience.

Do we detect a hint of lockdown madness in the theme of excitement at the pair possibly being untethered and released? Was this a show inspired by lockdown, or just created during it?

Your detection is on point! We wanted to create something that physically embodied both lockdown and social distancing, but it’s taken to a much more abstract, absurd and surreal place. There is no mention of lockdown, COVID or our real world – it’s all a lot more distant and strange. Our plans were thrown up in the air a bit; our original show was due to be produced as part of the Lion and Unicorn Theatre’s Associate Artist scheme has had to be postponed until late 2021, so we wanted to keep creative and busy during lockdowns 1&2, so decided to create this. Mainly for us to have fun, but also for the audience to have a bit of fun too.

Your characters are Sans and Moins, which as obviously spotted straight away (honest we did) means Without and Less in French, is that at all relevant or are we reading too much into things?

Very beady eyes from you all – yes, it is very relevant, both in character and situation. But we don’t want to give too much away at all! It’s a well-hidden little thing, so you’ll have to whack those beady eyes out again when you see the play.

The show was initially pencilled in for a December run, but you’ve decided to push it back now due to lockdown 2 (and since the time of interview, lockdown 3), was that a difficult decision to make?

It was a super difficult decision to make. We’d had the show pencilled in for a good couple of months as well as had the script developed, rehearsal space booked etc. etc. But with lockdown 2, we realised rehearsal would be almost impossible with us being spread across the country. In a way though, we’re grateful for the additional time to work on the show further, have some more fun with it and get it up to scratch to reach its full potential for February.

Finally, and because we really couldn’t let it pass by without comment, you’ve recently published “Poems While You Poo”; would you recommend that as a Christmas present for our dad’s maybe? And is there any poems in the collection about the toilet roll shortage crisis from the first lockdown?

We might be biased, but we’d definitely recommend it as a Christmas presents, not just for Dad’s but for the whole family! The collection is illustrated beautifully by my partner-in-crime Hal Darling (co-founder of ChewBoy) and takes you through the seven stages of doing your business, with a variety of poems ranging from comedic, wholesome, educational and emotional – it’s all there for your toilet breaks. And it’s available in hardback and paperback – so there’s a version for every book lover or toilet fiend you know. And we’d love to say there is some poems about the toilet roll shortage of lockdown gone by, but we’d been developing the book for such a long time before lockdown that we missed that boat! Maybe in our sequel that’ll make an appearance…

As always, our thanks to Georgie for taking the time during the latest lockdown to chat to us about the show. It is now scheduled to play at Lion & Unicorn Theatre between 9 and 14 February 2021. Further information, tickets and of course, that book, can be found on their website below.