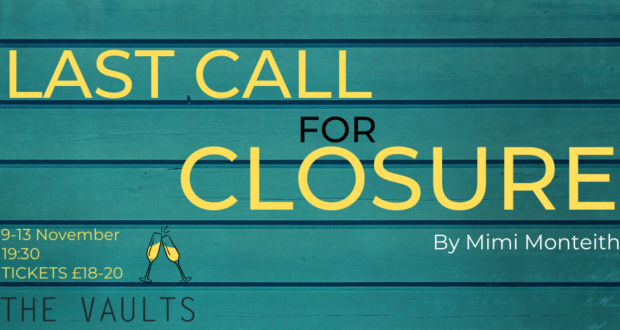 Author: Everything Theatre in Features and Interviews 28 October 2020 0 56 Views

Mimi Monteith’s Last Call for Closure is heading to The Vaults next month. It’s a tale of saying goodbye to an ex, against the backdrop of a hostage situation just a few doors down. And whilst we’ve never been held hostage, we can probably all relate to saying goodbye. We caught up with Mimi to find out more about the play and how it’s been shaped by lockdown?

So Mimi, first things first, what’s the play all about then?

Have you ever been in the situation where you’ve been invited to a friend’s birthday at the pub, and your ex is also there? You don’t talk to them all night but then you find an excuse to be the last ones to leave so that you can have a catch-up? That’s what the play is about, but instead of it ending there, due to a pub down the road being held hostage, they get stuck in their pub for 6 hours, until it is safe to leave. The play works to match the internal tension between the characters with the external panic and terror going on so nearby.

We love the idea that the pair are locked in due to a hostage situation nearby, we assume the inspiration isn’t from first-hand experience of ever being held hostage. So, what then was the initial spark for this story

In lockdown I kept coming back to the idea of being trapped somewhere because of an invisible enemy. A lot of my friends’ relationships have broken down because of lockdown and this ‘invisible enemy’ and I wanted to create something similar to that, but give the enemy a face. It has of course developed a long way from there, but in classic pandemic style, the spark was from COVID-19.

We’ve surely all had that “difficult” conversation when we’ve broken up with a partner, are there elements from your own life present? Any ex’s likely to spot something they might recognise?

Haha! I think with all writing there is an element of auto-biography to it, even if it is hidden deep in subtext, I’m sure there are lines that an ex or two out there can relate to. That being said, I think if you were to look for similarities to my love life and this show, you’d come up short.

Interestingly, the more that the play has been rehearsed, I am realising that without noticing, I’ve written about what I call ‘the decision to be an adult’. There are certainly elements from my ‘decision’ to grow up that are littered throughout the script; it is almost as if the pair breaking up are my current self with my younger self – Does that makes sense?

The show’s a two-hander, how involved were you in deciding on Eleanor de Rohan and Daniel Lockett as your breaking-up couple?

I was absolutely involved! I have worked with both actors on previous shows that I’ve had and when it came to casting they were definitely top choices – I only had to see whether their chemistry worked. I was in floods of tears in their audition together, they’re FANTASTIC.

The press release reads between both serious drama and comedic, is that a fair take of what to expect in the play’s style?

Yes, 100%. I’ve always found that ‘pressure cookers’ in theatre are created through finding that moment where something that is so awful it is somehow funny. Remaining on that ledge is something I’ve always loved exploring and it has the opportunity to be solved by simply laughing, or explode; it’s extremely exciting.

And just before we say goodbye for now, if you did happen to get caught up in a hostage situation whilst the show is on next month, anyone you’d like to be locked in with at the time?

I’m pretty sure El de Rohan and Dan Lockett have now nailed exactly how to handle the situation, I’d stick my their sides any day.

Thanks to Mimi for her time in chatting to us about her new play. You can catch Last Call for Closure at The Vaults between 9 and 13 November, tickets can be purchased direct from the venue website below.