Home » Features and Interviews » Interview: Meet the Just Us League

Author: Everything Theatre in Features and Interviews 15 September 2020 0 57 Views

Our friendship actually formed from our mutual love of comic books and all things nerdy.

Describing themselves as the UK’s premiere nerd comedy twosome, The Just Us League of Gary Tro and Javier Jarquin are bringing their latest show, MCUsical, to The Watford Fringe at the start of October. We caught up with the pair to ask them about the show, being bad losers, their plans to sell it to Disney+ for millions, and of course that all important question, what do you think Marvel would make of it all?! 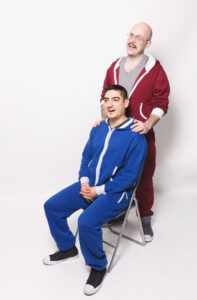 Let’s start with the obvious, tell us about MCUsical, your new show.

MCUsical retells the 10+ years of superhero movies through the medium of musical theatre show tunes. Next year we might do the DC movies through contemporary dance.

It’s your third show with a Marvel theme; safe to assume you’re both massive fans then?

You better believe it! We’ve been to the opening of each movie together since Captain America: The First Avenger. Our friendship actually formed from our mutual love of comic books and all things nerdy.

MCUsical is full of tunes from the West End, so it seems you’re big musical fans too?

We love Hamilton (who doesn’t?!), Book of Mormon, Avenue Q, Les Mis, The Last 5 Years, Dr Horrible’s Sing-a-long Blog, Legally Blonde, Spring Awakening…. we tend to love the more modern shows. Plus, we were growing up at the pinnacle of Disney magic; Little Mermaid, Beauty and the Beast, Lion King! It’s weird if a child of the 90s doesn’t love musicals!

You’re performing to a live audience whilst simultaneously live streaming; have you done that before, and what are you having to plan differently to make it work?

No, this is our first time but it seems like it might be the new normal now! The first difference is that it means a whole new tech element to the show, which always adds anxiety to any performance. BUT it’s a safe way for as many people as possible to watch so we’re embracing it. YOU’RE WELCOME! Performance-wise, I think it’s just going to be a case of playing to the room and if the show works for them, it’ll work for the folks watching the stream. And if it doesn’t, we can’t hear them boo. #win/win

The show was nominated for Best Musical at the Leicester Comedy Festival, has that helped you with taking it on further?

Well, to be honest, because we performed at 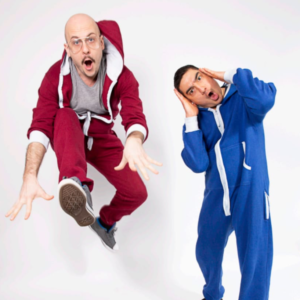 Leicester Comedy Festival at the end of February, the show was nominated for the award during lockdown. We actually had a whole streaming event that showed us watching the online award ceremony in anticipation that we might win. It was rather awkward when we realised that the people winning awards had pre-recorded acceptance speeches, as we hadn’t been asked to. We ended up getting a bit drunk. We were not gracious losers.

So, long answer short, we haven’t been able to do anything with the show since then because of Covid. Besides, isn’t the “Best Musical Comedy Award” the friends we make along the way?

How has the show developed from its first inception?

The show is actually still very similar to how it was first imagined. We’ve only ever written comedy for ourselves to perform, whereas the essence of this show is writing for a musical theatre cast (which we very much are not!). We can both fool around on stage quite comfortably for an hour and get laughs from the audience with some improvised joking about, but this is about writing an undeniably funny show that appeals to nerds and normies. We are lucky to have an incredible cast onboard, who are doing stuff with the script that is even funnier than we ever imagined it could be.  So I guess that would be how it’s developed.

Where do you hope to take the show from here?

We’ll be doing a few more preview shows around the country at the end of this year and first half of 2021. Then ideally it’s up to Edinburgh for the Fringe Festival [crosses fingers], followed by a tour, into the West End, leading to Broadway and finally a show recording that gets bought by Disney+ for £70,000,000. Ideally.

And finally, any contact from Marvel? Aren’t they meant to be quite the sticklers for protecting their copyright?

Whatever do you mean?? This is a completely original show with completely original characters! Are you suggesting that our character Black Lion, the king of the country of Kawanda, is based on any other character? Or that our star spangled superb soldier is called Cap for any other reason than he wears a cap. Also, Thor is a norse God and cannot be legally owned by any company! How very dare you!?

Our thanks to Gary and Javier for taking the time to talk to us about the show.

MCUsical will be playing at Watford’s Pump House Theatre on 3 and 4 October. Tickets are available to both attend in person or watch live online.

Previous: Pinocchio Gets Wood, the Online Adult Panto, Guildford Fringe Festival – Review
Next: Interview: How Keeley Lane zoomed to the top of the beanstalk.