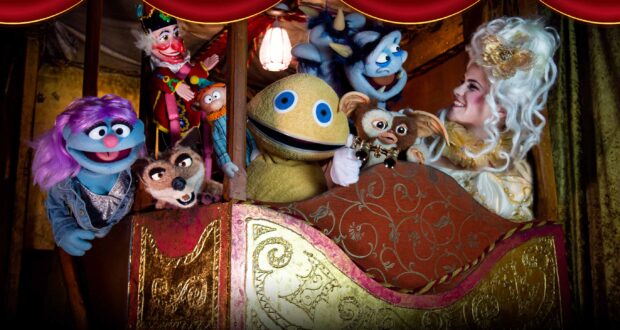 This Zoom production, hosted by Welsh puppeteer Emily Morus-Jones, was a fundraiser to showcase and support puppeteers. Excellent idea, and an impressive live up of acts. The show promised to “whisk audiences away from the doom and gloom on a magical mystery tour of nostalgic laughter and a trip into the otherworldly”.&nbsp; But it didn’t quite pan out like that. The evening began with introductions from Ddraig, a cute welsh dragon (puppeted by Morus-Jones), in a little red theatre set. It felt like she was acting as MC, there to introduce the acts. In my mind we were about&hellip;

This Zoom production, hosted by Welsh puppeteer Emily Morus-Jones, was a fundraiser to showcase and support puppeteers. Excellent idea, and an impressive live up of acts. The show promised to “whisk audiences away from the doom and gloom on a magical mystery tour of nostalgic laughter and a trip into the otherworldly”.  But it didn’t quite pan out like that.

The evening began with introductions from Ddraig, a cute welsh dragon (puppeted by Morus-Jones), in a little red theatre set. It felt like she was acting as MC, there to introduce the acts. In my mind we were about to see something a bit like a comedy store.

First up was a short film trailer of The Lips by Puppets with Guts, amazing giant puppet lips, who perform outside to funky soundtracks, after which Ddraig spoke briefly with Artistic Director Ivan. Wait – not a comedy store now but a chat show? OK… Next, a fun film from the Cardiff Animation Festival about becoming a quail. Interesting, even if not actually puppetry.  So a showreel now?

Next, an interview with Patsy May (puppeted by Laura Bacon) who found fame as a contestant in Britain’s Got Talent. “Great!” I thought “the show is getting into its stride. It’s not a comedy store or a showreel, it’s definitely like a chat show!”  Patsy was charming, funny and spontaneous, offering us a lovely film journal about her adventures in Wales. But the interview with Ddraig was a little laboured, and when they asked the audience to join in with questions it was somewhat uncomfortable. Much better to have just handed the mike to Patsy to do her stuff.

After another short film, (so now we’re back in a showreel again?) suddenly a 10 minute break. Why? If the puppeteers needed a pause why not play the films in that space? Fine, I just had a drink and waited. Soon Ddraig returned to host a prize draw. Where did this fit in?  Although interactive, it was unexpected and irrelevant, further confusing the structure of the evening.

Clever puppet burlesque from Mademoiselle Lychee (Aya Nakamura) punctuated the second half, involving a human head with a tiny, dancing puppet body.  A bit of cheeky fun; so it’s a cabaret now?

Onto a fascinating project called Toybox by Kamari Romeo, who explores his childhood through music, spoken word and puppetry, which was excellent, innovative and professional.  But once more, weak interviewing technique just served to detract focus.

The evening’s final act was an interview with Julian Kemp, BAFTA and Emmy award-winning director.  He brought behind the scenes clips from TV programme The Furchester Hotel and a vintage show called Roger and the Rottentrolls, offering entertaining insights into how puppetry for television can work. Again though, this might have worked better as a presentation rather than a conversation. Ending the evening with an interview rather than a fun performance seemed an odd choice, as it brought the pace down.

Delightful as she is, Ddraig might not be the best host for this compilation. An MC needs to be the hub of the show, bringing focus and forging direction, but our dragon friend umm’d and err’d constantly, seemingly unprepared. Also, the puppet wasn’t very animated: she could stare into the camera, but had no moving wings or eyes, no features to create movement, other than a mouth that opened wide to occasionally laugh.  Perhaps the more articulated Patsy May could stand in as interviewer.

Undoubtedly, the content and intention of the evening was admirable, but without definition to the format it was hard to settle into enjoying the show, much as I wanted to, and I wasn’t really whisked anywhere.  However, with some reworking its rich raw material could build into a much more effective production.

Produced by: The Pop-Up Palladium

Further shows are planned, included the next on 4 October. Please check website for details.

Previous: The Boss of It All, Online – Review
Next: Woyzeck, Theatro Technis – Review