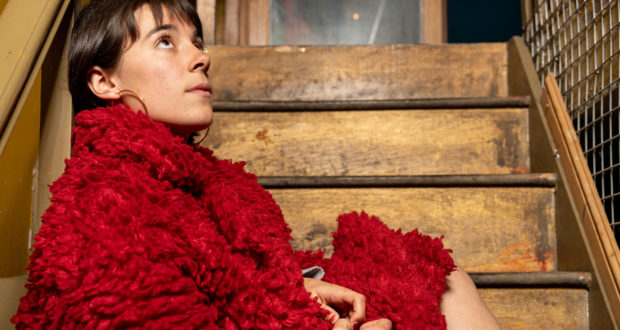 It’s quite possible to be in a room full of people and yet feel utterly alone. That is the case for Amal in Siofra Dromgoole's Baby, What Blessings. We might never meet Amal but we sure do hear a lot about him from Billie as she lurches into her story of how they met, how she felt about him, how she stalked him to get his attention, how she.... As you'll have noticed, it's a lot of “she” and very little him. All for good reason, as we slowly come to realise. Baby, What Blessings sees Grainne Dromgoole’s Billie&hellip;

A sensitive subject matter is given a gentle touch in this one hander that sees Billie learn all too late about loneliness and male depression.

It’s quite possible to be in a room full of people and yet feel utterly alone. That is the case for Amal in Siofra Dromgoole’s Baby, What Blessings. We might never meet Amal but we sure do hear a lot about him from Billie as she lurches into her story of how they met, how she felt about him, how she stalked him to get his attention, how she…. As you’ll have noticed, it’s a lot of “she” and very little him. All for good reason, as we slowly come to realise.

Baby, What Blessings sees Grainne Dromgoole’s Billie tell us all about her relationship with Amal, from the first time she saw him, through to possibly the last. Dromgoole’s portrayal of Billie slightly grates at first, and there is a worry this is going to be yet another tale of middle-class woe, the “oh look at me, isn’t my white middle class life so hard” theatre that seems so prevalent at times. But slowly it becomes clear that even Billie herself sees, albeit way too late, how self-absorbed she is. And as that truth dawns on her, we finally begin to understand Amal that little bit more too. It’s just too little, too late for Billie though, as she works out what all the rest of us have realised long before she finishes her story.

Amal is very much an enigma throughout, both literally, since the only person we ever see is storyteller Billie, and figuratively too. Billie may talk about him incessantly, but for all her obsession she never truly sees beyond the surface, or maybe that should be skin deep. And because Billie never sees depth, as storyteller she can’t tell us, the audience, much more either. At first his withdrawn nature is portrayed by Billie as coolness. His lack of words is unimportant in their relationship, as she can talk enough for both. But slowly little clues are dropped into her chatter, little hints of the darkness engulfing Amal.

What makes Baby, What Blessings work so well is the soft touch given to its sensitive subject matter by writer, Siofra Dromgoole (the second of the Dromgoole sisters who make up Three Sisters Theatre), and by director Imy Wyatt Corner. It’s the words left unsaid by Billie, the moments she stops herself mid-sentence, trailing off before she completes a thought, that give this show strength. Much may be left unsaid, but this allows the audience to fill in those silences, drawing out conclusions that are there for us to see so clearly.

The topics of depression, male suicide and the isolation that can be felt by people of colour in a middle class and very white environment are all handled with beautiful care. If you believe good theatre leaves you moved by what you have just witnessed, and with an urge to discuss it, then Baby, What Blessings is a show that you will greatly enjoy.

Previous: The Escape Act: A Holocaust Memoir, Jackson’s Lane – Review
Next: The Open, The Space – Review