Home » Opinions » The “Spark” of Something: David Judge’s ‘SparkPlug’ 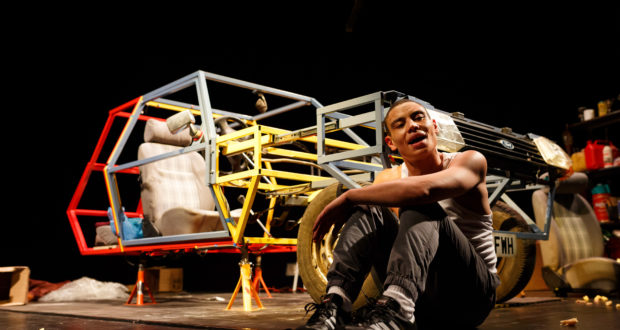 The “Spark” of Something: David Judge’s ‘SparkPlug’

Box of Tricks theatre company is travelling across the UK this March and April with SparkPlug, a new play by David Judge that shares the actor/playwright’s own background as a mixed-race child brought up by a white man. In this guest blog, Box of Tricks and Judge share the “spark” behind this one-man production and the process of bringing it to the UK stage.

Box of Tricks makes plays. We champion playwrights and empower them to tell the stories they want to tell. Together, we go on a journey to uncover new plays that reflect the world in which we live today. Our commitment to finding new voices and uncovering new talent is typified by our current production: SparkPlug by David Judge. It’s been a real labour of love working with David and bringing his story to the stage.

We first worked with David as an actor in 2013. Full of passion and energy, he was a brilliant collaborator and committed to making the best theatre we could. We went to watch him perform poems at a few spoken word nights and recognised a unique voice that needed to be heard. The following year, we invited David to be one of the writers on our first PlayBox cycle for early-career local playwrights.

Writing his first play, it soon became clear David was something special. He secured a year-long attachment to Talawa Writers’ Programme and the Royal Exchange. We commissioned him to write a new play inspired by his personal experiences of being a mixed-race Mancunian brought up by a white mum and adoptive white dad. SparkPlug is the result. Exploring race, family and love, it’s a punchy and poetic play that delves into what it is to be a father, a son, a man.

“To say I’m my father’s first-born son would be a lie. He has no sons born – none of his own at all. But what makes something your own? Still, I carry the tradition by having his name, David. David Judge. Two David Judges. One white. One brown. One adult. One child. One likes Rod Stewart. The other, Michael Jackson. No blood but the same name. No blood but father and son. No blood but together forever. The makings of a really awkward, but a beautifully honest, love story – and Box of Tricks said, ‘write it’!

So many ideas! So many wonderful things to play with! Dave and his car! Let’s have a car on stage! We can make soundscapes from window wipers! Build tension with the ticking of an indicator! Set times and dates by make and model of the car! Whose story is it? Dave’s? David’s? David’s memory of Dave? We could have a disclaimer! Music! Mix tapes! Cassettes! Jacko, Rod UB40 and Pump up the fucking Jam!!! So many rules to be broke and fun to be had.

As I creep up on middle age, I reflect more and more on the man I have been, the man I am and the man I will become. These reflections highlight the complications with my identity in today’s flurry of political correctness. As a “man of colour”, my voice as a writer has become a valued weapon, loaded and aimed at those without. I sometimes feel pressured to speak for a community I know nothing of, and I feel I am being recruited to hate those without – the “white man”. This fight both inside and outside of myself makes me question where my loyalties lie. Who am I loyal to? And who to me?

The answers are straightforward: my biological father – my ‘black’ – left me before I was born; my biological Mother – my ‘blood’ – left me when I was seven years old. The only person who stuck by me from boy to man, who grew and shaped me into the man I am today, was a white man. A white man with tattooed knuckles, with a ginger perm, with a Ford Capri, with Rod Stewart constantly on the stereo. So out of my loyalty to him, I have used my voice to write a play about the man who made me one: my father. I hope it’s enjoyed.”

Developed through our New Tricks programme over the last two years, SparkPlug is like nothing we’ve produced before. It’s a powerful, personal and poetic piece that resists easy definition and confounds expectations.

SparkPlug is touring nationally until 13 April.