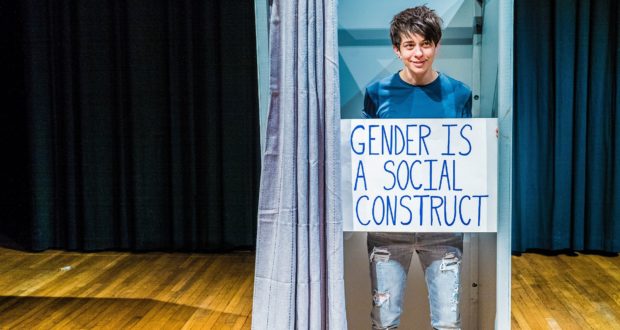 Homegrown Festival: Occupy He. She. Him. Her. They.&nbsp; Such little words but with so much meaning.&nbsp; But as Elise Heaven tells us, gender is a social construct. &nbsp;There are people who don’t identify as he or she, otherwise known as non-binary.&nbsp; Such as Elise Heaven, who isn’t he or she, but as is Elise’s wish, the pronoun to use is “they”.&nbsp; Except they is singular, not plural.&nbsp; Well that's going to mess my editor's head up, that’s for sure. [Ed: you underestimate me!] She’s A Good Boy perfectly exemplifies what Battersea Arts Centre’s Homegrown Festival: Occupy is all about:&hellip;

A show that is not only entertaining, but educational, helping us understand the world of non-binary gender. Another perfect fit for a festival aiming at underrepresented groups.

He. She. Him. Her. They.  Such little words but with so much meaning.  But as Elise Heaven tells us, gender is a social construct.  There are people who don’t identify as he or she, otherwise known as non-binary.  Such as Elise Heaven, who isn’t he or she, but as is Elise’s wish, the pronoun to use is “they”.  Except they is singular, not plural.  Well that’s going to mess my editor’s head up, that’s for sure. [Ed: you underestimate me!]

She’s A Good Boy perfectly exemplifies what Battersea Arts Centre’s Homegrown Festival: Occupy is all about: giving a voice to the underrepresented. Right now, what could be more relevant than a piece of theatre examining non-binary gender. In a week when MP Andrea Leadsom stated that “it is right that parents should be able to choose the moment at which their children become exposed to that information” in a debate about LBGT, Elise Heaven gave the best evidence for Leadsom being wrong, wrong and wrong again with such ignorant comments about people who might not confirm to the narrow minded bigotry of anyone who nodded in agreement with such a outdated comment.

Elise, full of energy, bounds into the room, grinning and instantly putting all at ease. They then proceed to run through various issues they have encountered, from the questions people have asked them, to the things that people don’t say to them. It’s insightful and educational, no doubt even for the more well-informed members of the audience. Most importantly it’s entertaining, as Elise is a performer with a charming style.

It all sounds so very serious and yes, the subject matter is, but the storytelling from Elise is anything but. They tell their story with some clever little tricks, introducing us to themselves at various ages of childhood, in an effort to explain how they felt at that age, how they acted, how they were simply just like any other child, except even at a young age they clearly knew they weren’t going to be “him” or “her”.  There are also songs, some with guitar (miniature version) and some with piano (floor mat version), all very amusing, especially when one is introduced as a “fusion of wanky heartfelt pop”, and entitled “Take your genitals off”, containing advice on trying to live life without aforementioned genitals dictating it. You simply can’t help but smile and wonder just why some people do make such a big deal about being male or female.  Because as Elise tells us, we are all human after all, why does it matter about defining one another as he or she.

There are important darker moments as well. Elise explains how they were treated in their first job in a clothes store, and later beaten up, when the defence in court was that they “looked a bit like a man”. It helps highlight the bigotry still present and faced by people like Elise daily. Briefly the laughter stops and the audience is made to think about the consequences of the ignorance still around us, no doubt allowed to grow braver with idiotic comments by the like of Leadson.

It is surely though through shows like She’s A Good Boy and characters like Elise Heaven, that people will change their views, one person at a time.  And it is events like Homegrown Festival that give a great platform for such shows to reach a greater audience to educate and entertain in equal measure.

Written and performed by: Elise Heaven
Directed by: Emma Williams
Produced by: Christina Poulton for Strike A Light
Box Office: 020 7223 2223
Booking link: https://www.bac.org.uk/content/45220/whats_on/whats_on/shows/homegrown_festival_occupy
Booking until: This show has finished its current run, but Homegrown Festival runs until 12 April 2019.