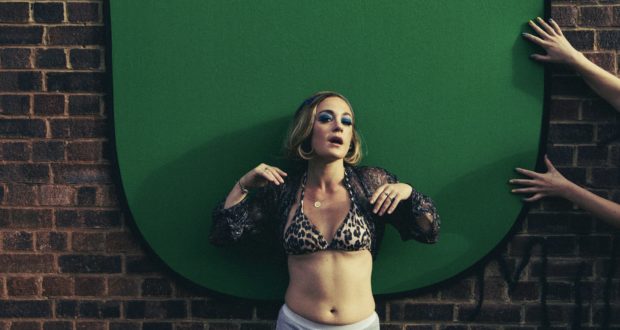 Being a woman in our tech-filled, modern-day society is far from easy – but at least it makes for a compelling night at the theatre. Made in China’s Super Duper Close Up, a one-woman show written and performed by Jess Latowicki, combines film, movement and text to take on our contemporary anxieties and gender politics in a society where social media reigns supreme. Ahead of the show’s run at the Yard Theatre, Latowicki tells us more about devising this complex show and taking on its existential questions in this guest blog.

Super Duper Close Up is a brand-new adventure for Made In China. All our shows seek new territory and make their own rules, but this one sees various firsts. It’s the first time we’ve worked with film; after toying with a number of ideas – including shooting and re-shooting a single lonely-drink-at-the-bar scene for the entirety of the show – we’re now using live-feed to zoom strangely and relentlessly in on details the audience can’t otherwise see. It’s the first time we’ve had one person – ok, me! – lead on a project, instead of equal leadership between co-directors.

It’s also the first time we’ve had a script before most of the other aspects are in place. I went to Greece and finished writing this bonkers 17,000 word monologue about how bonkers it is to feel like 17,000 things are happening at once, but mostly elsewhere. I sent it to Made In China co-director Tim Cowbury, expecting to hear that it was interesting, but the script would, as usual, probably emerge only after everyone got into the rehearsal room. Instead Tim was like, ‘This is amazing, it’s more-or-less complete!’

Now that it really is complete (and don’t worry, shorter), we’ve smashed it together with dancing, super sexy video, ridiculous nods to the world of glamour and perhaps the most amazing dress of all time. Ok, two of the most amazing dresses (It’s my show, I can wear what I want, thank you very much!).

Most importantly, the piece feels urgent. It’s about a very contemporary form of anxiety that feels like it’s developed sharply this decade, fed by social media: the feeling of being constantly being looked at but never really seen; of always looking but never really seeing. As part of this, the show explores the poisonous legacy of the male gaze and old gender stereotypes, asking whether we’ve actually moved beyond these in our selfies and status updates, and whether our culture glorifies and rewards women for their beauty and suffering in unhelpful ways.

So more than any other show we’ve made, this one really puts its finger on the gender politics of information overload. We explore not just ‘what is it like to live in a culture of overload’, but ‘what does it do to us if that overload is part of a very male gaze’, and in particular, what does that do to women? There’s no single inspiration – it’s a complex show resulting from the last couple of years spent living in a complicated world. As the script testifies, I did a lot of googling. A lot of scrolling. But I also wrote and wrote and wrote; I met academics to talk about the radicalization of young girls; I made fanzines to disturbingly similar media coverage of sex and violence; I visited sleep disorder research centres and plastic surgeons. And I thought about family, inherited trauma, learned behaviour and my own anxiety.

All of which means the show actually engages with a set of pretty timeless existential questions in the end: Where are we going? How do we get there? Is there any point or any hope?! All of that big stuff that makes good tough art is in Super Duper Close Up with a very contemporary, very female slant on it. How do you go anywhere as a modern woman, if you keep hitting a wall that says you’re not allowed to be both feminine and a bold, active protagonist? It’s 2018, FFS! Why are we still trying to force women to make the choice between those identities?

There is a lot of anger behind those kinds of questions, no doubt. Anger is something women still need to fight to be allowed to express themselves – which, incidentally, as a woman, makes me angry! But in Super Duper Close Up the fury is not without humour and not simply directed outwards or at easy targets. We could have made a much simpler piece that categorically said, ‘Men are bad! Boo! Down with the patriarchy!’ and ‘Capitalism is bad! Boo! Down with advertising and social media and the old slogan “sex sells!”’

We could have made that show, but we didn’t want to. The world doesn’t need that show. It’s more complicated, more screwed up, more embedded than that.

Super Duper Close Up is an attempt to push and prod and move the conversation on – and, of course, to make a compelling and bold new formal experiment along the way! It’s a ravishing, uncomfortably entertaining and funny spectacle that smacks people in the head when they were looking the other way and sends them out not with answers but questions, questions, questions. And doesn’t consist just of me walking into a bar and having a drink alone.

Super Duper Close Up will play at the Yard Theatre from 13-24 November.

Previous: WIN A PAIR OF TICKETS TO SEE THE HILARIOUS THE PLAY THAT GOES WRONG!
Next: Bury the Dead, Finborough Theatre – Review