Home » Features and Interviews » Interview: Clifford Samuel on ‘A Guide for the Homesick’ 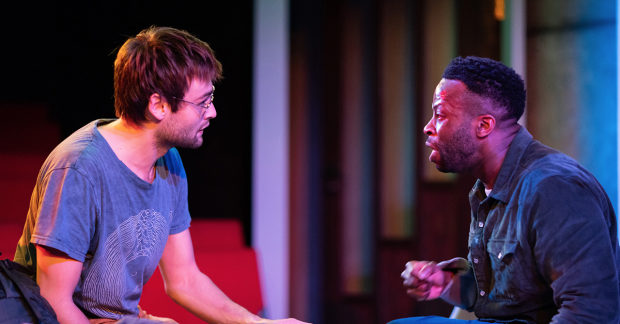 Interview: Clifford Samuel on ‘A Guide for the Homesick’

Author: Everything Theatre in Features and Interviews 21 November 2018 0 199 Views

Playing in the intimate Trafalgar Studios 2, Ken Urban’s A Guide for the Homesick is an intensely dramatic two-hander about secrets and identity. Two young Americans meet in an Amsterdam hotel, and as Teddy (Clifford Samuel) and Jeremy (Douglas Booth) get to know each other, the truth about them both is gradually revealed. Nick Myles met with Samuel after the show’s press night to talk about the play and get a snapshot of the actor’s sense of his career to date and what the future might hold.

Were you happy with last night’s performance?
Yes, I am. Press nights are always strange, because it’s not a typical audience. … This piece is so dark and traumatic that people laugh as a release.

You can never tell where you’re going to get a laugh until you put it in front of an audience, can you?
No. And the laughs from the first preview were different from the next night. We’re not plotting where people are going to laugh, but it’s hard because your first preview is your first reference and you always try subconsciously to reach that type of performance again, but you never will because it’s always different.

Do you read reviews?
No, but I like to hear ‘Oh, there’s a nice mention here’ or ‘You’ve had good reviews’. At the end of the run when there’s nothing you can do I like to reflect by reading them all. It’s not about ‘Love me! Love me!’ – it’s about who got it.

You have worked consistently since drama school and hit some pretty big organisations along the way, including the RSC, the National Theatre and The Globe, as well as working with directors including Deborah Warner and Peter Brook. Would you say you’re successful so far?
That’s a difficult question for me to answer, because you always go ‘What is success?’ and once you know the definition, are you? My answer’s yes, but out of self-confidence more than cockiness.

Is success just being in work, or is it being at a point where you’re actively making choices and shaping your career?
The latter, absolutely. From the get-go I’ve always made choices. I’ve been careful – beggars can be choosers.

Are you confident that you always make the right choices, though? Have there been any mistakes, or missed opportunities?
I ask myself that quite regularly, and I have no regrets. Some of the jobs I didn’t get, when I’ve looked at the production I’ve always dodged a bullet! Or sometimes when I’ve looked at the actor playing the role and it’s a surprise because they’re completely different: a generation older, different background, race…

How do you cope with the ups and downs of an actor’s life?
A really good friend of mine said, ‘If you’re having a down day, look at your CV.’ And I did and I thought ‘Oh my goodness…’ Because sometimes you can be a headless chicken chasing the next job, and you forget where you’ve come from and how you’re progressing, and that always stops me in my tracks and allows me to be still and be present and enjoy.

Do you still have that anxiety of worrying about being able to keep working?
Yes, always.

What are your criteria for choosing to take on a role?
Number one is good writing – it’s the bedrock and the foundation. I don’t even worry about the genre, I always go for good writing, then how the character fits into the story. I have to identify with the character in some way, which is always easier with good writing because they’re real people. I always read a script three times: once as the audience, once as the actor, and then from the character’s point of view.

How important is a character’s ethnicity to you?
Because there’s now diversity casting going on, I have to be careful. I just can’t be a token in a production. There have been a few productions this year that I’ve been offered but said “no” to because I’m not comfortable with the character. There’s a sort of apologetic casting, and the audience know, ‘Oh, that’s the token part’.

What about sexuality?
Ken’s written such a brilliant play that you forget about gender and sexual orientation. I’m straight, but there’s no such thing as ‘playing gay’ – it’s as silly as saying ‘play black’ or ‘play a feather boa’.

Having performed in everything from one-man shows to large ensembles, what is it that makes two-handers unique?
It’s the intensity. There’s no escaping it – it’s just the two of you. It’s so immediate and just so relentless. It’s this incredible tennis match. The challenge is there’s so much to learn, and you end up learning the other part – you have to. And it needs an immense amount of concentration.

The fourth wall is definitely intact, isn’t it? Whereas monologues are direct storytelling where you engage actively with the audience, this piece is the exact opposite: the audience’s role is almost entirely to observe.
The rhythm is just brilliant – there’s an incredible musicality to the writing and the characters, and you’re trying to hit every note perfectly. And what a great dance partner Douglas Booth is.

Did you two actors know each other previously?
No, but we had very good mutual friends, which helped. We knew our personalities would be quite alike, which was a good start.

What does your future hold? If you could write your career, what parts would you give yourself?
I always want to keep doing interesting work. I love what [Black Panther director] Ryan Coogler’s doing. I love what Chris Nolan’s always done.

So you wouldn’t be averse to a massive Hollywood blockbuster?
No, but also drama. Ryan Coogler does a lot of indie films. I’m trying to do more screen work, so the theatre work that I do now has to be like this play: challenging.

You were recently on television in the BBC’s international crime drama McMafia. How was that experience?
Working on a really high budget production like that, you do see it. The production values are just better. These incredible locations are written in and the budget lends a hand because you actually can go to them. And you feel it on set – the time that was taken to really perfect a frame or picture. Hours and hours of lighting, and you see why, and it all makes sense. It was nice to be a part of something that big – though it didn’t feel big on set. It was never imposing, there was no pressure. It was actually quite domestic, which was nice.

But are you one of those actors who will always return to theatre?
Yes. I believe theatre really re-energises me and gives me a focus. Running a play for how many weeks and months reminds you what it takes to keep that stamina up.

Do you find long runs daunting?
It can be, but for me I always use it to find new things to discover, and it naturally evolves with your acting partner. You find inspiration in a line or a moment, and that helps lift the scene, which stops it from being stale.

Have you got any pre-show routines?
I do, and I’m getting more confident in saying what it is: I’m always brushing my teeth! Maybe it’s the minty freshness at the back of one’s throat? It’s become a superstition – it gives me security.

As well as acting, you’re also a writer. How is that discipline, which is a very different challenge to acting?
Actors usually start with writing for themselves, but then it changes once you’ve written the whole story and you’re not attached to it as a performer. I’m deep into a writing project at the moment – it’s a Russian story, that’s all I’m saying!

A Guide for the Homesick is playing at Trafalgar Studios through 24 November.