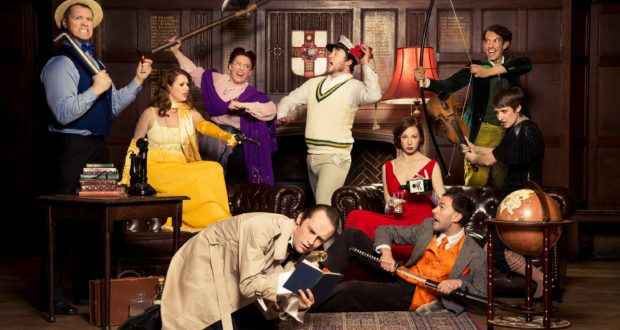 Pros: A cast fully able to think on their feet, providing some genuinely brilliant one liners, a little innuendo and plenty of clever ad libs.

Cons: Not a show for the connoisseurs who like their theatre seamless and without actors making each other laugh when they should be performing
Murder She Didn’t Write, Leicester Square Theatre – Review

Pros: A cast fully able to think on their feet, providing some genuinely brilliant one liners, a little innuendo and plenty of clever ad libs. Cons: Not a show for the connoisseurs who like their theatre seamless and without actors making each other laugh when they should be performing Like a good episode of Scooby Doo, the ending of Murder She Didn’t Write, from Degrees Of Error Theatre, makes very little sense.&nbsp; But getting there involves a lot of rather enjoyable tomfoolery.&nbsp; The murderer of Alice was Ms Gold, with the poisonous syringes, in the morgue. Obviously. But don’t&hellip;

Falls just the right side of organised chaos. One part theatre, one part slapstick and one part Scooby Doo.

User Rating: Be the first one !
Like a good episode of Scooby Doo, the ending of Murder She Didn’t Write, from Degrees Of Error Theatre, makes very little sense.  But getting there involves a lot of rather enjoyable tomfoolery.  The murderer of Alice was Ms Gold, with the poisonous syringes, in the morgue. Obviously. But don’t worry, I haven’t given the plot away. Because this is murder mystery by improv.  When the show’s next on the only thing that will remain the same will be the characters’ names and the clothes they’re wearing.

After a brief introduction from our detective-cum-compere, the plot is, very loosely, made up from audience suggestions. We’re asked for a location and murder weapon. Then one lucky audience member, decked out in deer stalker and dubbed Jerkins, the bumbling assistant, gets the last say from the various options.  But that isn’t Jerkins’ only role; they later get to select who gets murdered and by whom. No one else knows, as the selections are made by picking a card that corresponds with the colours worn by the characters. It’s another nice addition to make it very clear that nothing much can be pre-planned here.

And then the real fun starts. We’re introduced to the cast, clearly working from a very loose script, but thinking on their feet as they mould their characters into the scene they have been given. There are two sisters, quickly improvising how one is desperate for plastic surgery, as she’s just too beautiful and intimidating.  Then two doctors at the posh hospital, and finally the soon to be deceased Alice, the patient who’s just had her own surgery; a beard implant, because what beautiful lady doesn’t need a lovely lacy beard?

The geek in me was desperately trying to work out what were the fixed points in the script that might show up every performance. The rest of me simply sat back and enjoyed the talents of the six strong cast, admiring how they managed to keep not only the story going, but also its running themes, sometimes with ease and sometimes with metaphorical crowbar.  What could so easily have been throwaway comments, from both audience and cast as they desperately try to make each other corpse, are picked up on and become constants.  Someone had originally suggested Australia Day, and whilst not selected by Jerkins, it still became a running joke, with references to Neighbours featuring heavily. Rather more randomly, ‘the pouting bosom’, misspoken early on and instantly used as the plastic surgery procedure to be carried out on our beautiful sister.  And most random of all, the name given to the chemical to be used for the procedure, unpronounceable as the cast struggle to repeat it whenever required.  Certainly unspellable here.

As for the ending, the moment the murdered is revealed?  Well, let’s be honest, it could have been any of them. The plot is so thin and so shoehorned, with all the cast having invented reasons to have done the wicked deed, that the only deciding factor is the coloured card picked out earlier by Jerkins. But that is absolutely not the point. The point is that we laughed all the way to the end, when the plucky detective pointed to the murderer and declared “it was you”. I almost expected the response “Yes and I would have got away with it if it wasn’t for you pesky kids.”  I loved Scooby Doo as a kid and I love Murder She Didn’t Write as an adult. Both made me smile, and both I could watch over and over again. I doubt I’d ever get bored.