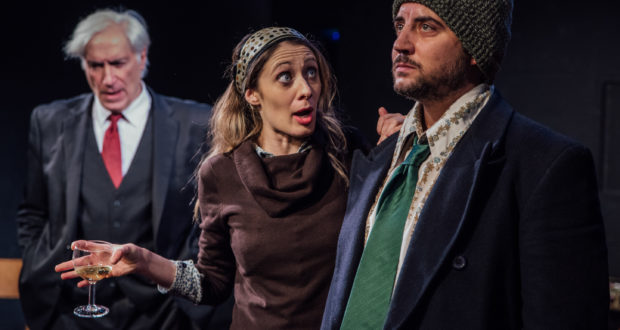 Pros: Some outstanding performances, most notably from Jack Klaff and Triana Terry.

Pros: Some outstanding performances, most notably from Jack Klaff and Triana Terry. Cons: Forced jokes, stodgy philosophy and unrealistic characterisation. A retro living room sets the scene: a 1980s telephone, a radiogram and the albums of Mario Lanza, Dionne Warwick plus, strangely, How to Speak Welsh. At a desk we see Antonio (Jack Gordon), a philosopher who’s about to complete his magnum opus, scribbling in his notebook. It’s also his birthday. He’s distracted by his girlfriend Monika (a feisty Triana Terry) who is eager to build her own career as a writer, full of envy, and possibly pregnant. “Why&hellip;

An hour and a half of claustrophobic family argument, peppered with strained witticisms.

A retro living room sets the scene: a 1980s telephone, a radiogram and the albums of Mario Lanza, Dionne Warwick plus, strangely, How to Speak Welsh. At a desk we see Antonio (Jack Gordon), a philosopher who’s about to complete his magnum opus, scribbling in his notebook. It’s also his birthday.

He’s distracted by his girlfriend Monika (a feisty Triana Terry) who is eager to build her own career as a writer, full of envy, and possibly pregnant. “Why I feel obliged to arrange a birthday party for you when you won’t marry me is quite beyond me,” she says, plaintively.

Enter Antonio’s best (and only) friend, Simon – perkily played by Ben Warwick – who’s also his doctor, and with whom he exchanges light badinage while waiting for the other guests to arrive. They turn out to be Antonio’s irascible Italian father Alessandro (a terrific performance from Jack Klaff, reminiscent of Frank Finlay’s Casanova), and his sister Gina (a willowy, petulant Ilaria Ambrogi). Finally, we meet the publisher Hugo, played with duly irritating camp (and peppered with Wildean bon mots) by Theo Devaney.

This 2001 play by Alexander Matthews – a philosophy lecturer before turning to drama – is awash with philosophy and acrobatic wordplay. But Matthews is no Tom Stoppard: all his characters display the same strained verbal dexterity, with little regard for character individuality. “I’ll be showing off for you, letting off self-esteem,” says Antonio. “My punchline is no longer in sync with my paunchline,” quips Hugo. “I’m calling my autobiography Patchwork Guilt,” jokes Simon.

There follow lengthy expositions of Antonio’s philosophy, in which he expounds his theory which will reconcile free will and determinism, expose both the Big Bang theory and religion as frauds, and which is – as Simon sycophantically puts it – a philosophy that “resolves conflicts and could avert armageddon”. But here again, Matthews doesn’t have Stoppard’s light touch with philosophy: instead, the explanations are overlong, turgid and, while being full of big concepts, ultimately empty of structure and argument.

The bulk of the play comprises an extended family squabble between Antonio, his father (who wants him to take over the family business) and Gina. With six characters on stage in a play set in real time, it can be difficult to produce intimacy; and so director Evan Keele uses the largely effective technique of focusing a spotlight on a pair of characters to hear just their conversation, while the others freeze in the darkness.

But then characters come and go for no reason: Alessandro and Gina disappear offstage for 20 minutes after Hugo’s arrival, with Gina slipping in to sing two lines of a song before vapidly drifting out again; Antonio and Simon are left entirely alone on stage for Simon’s big revelation about Antonio’s health (one of the screaming secrets of the title). Incongruously, all but one of the characters spontaneously agree to take part in a seance, their fingers poised over the Ouija board before Antonio bursts in and shocks them out of it. It’s a bizarre scene that goes nowhere, and fits neither with the plot nor with the beliefs and motivations of any of the characters.

Screaming Secrets is performed with gusto by the cast, but it’s a shaky play that no amount of good acting can rescue.