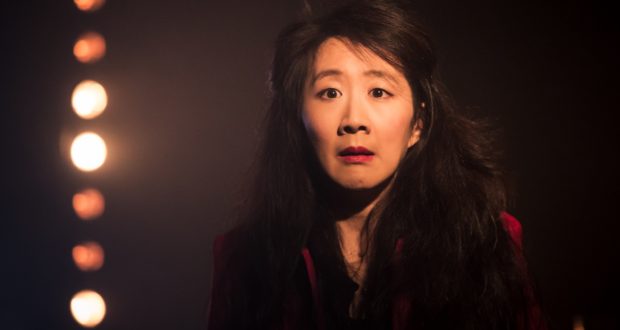 Into the Numbers, Finborough Theatre – Review

Pros: Whilst Elizabeth Chan and Timothy Knightley head the cast, Amy Molloy’s portrayal of Minnie Vautrin, a missionary in Nanking, is a show stealer.

Cons: Besides the bleakness of the topic, at times the show can be a little muddled and it’s hard to follow what writer Chistophen Chen is aiming for with some scenes.
Into the Numbers, Finborough Theatre – Review

Pros: Whilst Elizabeth Chan and Timothy Knightley head the cast, Amy Molloy’s portrayal of Minnie Vautrin, a missionary in Nanking, is a show stealer. Cons: Besides the bleakness of the topic, at times the show can be a little muddled and it's hard to follow what writer Chistophen Chen is aiming for with some scenes. Into the Numbers is a brave play. It takes not one but two horrific events and ties them together, trying to comprehend both, whilst making it clear that one of these is on a scale that can never be fully comprehended. Even on paper it’s clear&hellip;

A harrowing and at times graphic account of Iris Chang and the Nanking Massacre that for those who can handle such darkness is a superb way to explore both subjects, and likely to leave you wanting to understand more.

User Rating: 4.23 ( 2 votes)
Into the Numbers is a brave play. It takes not one but two horrific events and ties them together, trying to comprehend both, whilst making it clear that one of these is on a scale that can never be fully comprehended. Even on paper it’s clear this play is not going to be easy viewing. In reality it is even more harrowing than you could predict before heading into the claustrophobic space of the Finborough Theatre.

The first event is the Nanking Massacre; in 1937 Japanese troops entered Nanking and committed an act of genocide, reportedly killing 300,000 civilians over a period of just six weeks. The second event is the life, and eventual suicide, of Iris Chang, a historian whose book, The Rape of Nanking, would bring the massacre back into the public eye. But at what cost to her personally?

The play’s structure follows Chang’s state of mind, beginning in an orderly fashion as she (Elizabeth Chan) gives lectures and interviews on the massacre, but slowly descending into fragmented chaos and darkness. The lecture and subsequent interview that dominate the opening are a perfect tool to introduce us to the horrors of Nanking. There is little held back as Chang describes brutal murders of hundreds of thousands of civilians. As the interview progresses, the numbers flow, demonstrating not so much the scale of the massacre, as the impossibility of comprehending such numbers, instead focusing on individual cases that make it much more personal. After all, how do you start to comprehend 300,000 deaths and 50,000 rapes. How do you even begin to portray such numbers in a tiny theatre in West London?

Slowly the mental toll on Chang becomes apparent. Her confidence and belief in her topic waver, and she becomes haunted by what she must have unearthed in her research. Interviews turn into scenes from her home life as her husband attempts to draw her away from herself and her work, then shift again to scenes with her doctor as she tries to cope with depression. The ease with which one scene becomes the next is aided by Timothy Knightley who plays interviewer, husband and doctor. Knightley changes sometimes in mid-sentence, with hardly a pause as his accent and body language change and we are transported between TV studio, doctor’s surgery and home.

The play gradually gets more intense, the scenes more forceful, urgent…and bleak. It is the scene with Amy Molloy, as Nanking missionary Minnie Vautrin, that takes us again into the harrowing depths of the massacre. Molloy steals the show as she heartbreakingly describes her efforts to save girls from the Japanese soldiers who simply walked into the college she worked at and took them away. For those brief moments the play descends to a darker level and had it ended at that point I doubt anyone would have complained. The tension of that scene and the moments afterwards are when the last of the audience are shifted to the edge of their seats.

Into The Numbers is a dark, sorrowful exploration of the end of Chang’s life and how the horrors of the Nanking Massacre may have been the catalyst that caused her suicide. It is not for the faint-hearted, but it is another fine production from Finborough Theatre that those with a strong stomach should really attempt to see.

Previous: Bananaman the Musical, Southwark Playhouse – Review
Next: ‘The Crystal Egg Live’ and Theatre’s Relevance in a Screen-Dominated World