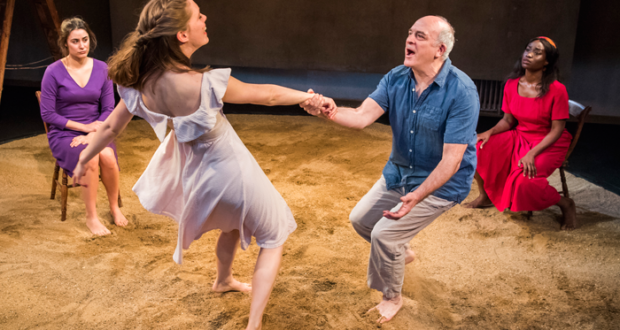 Pros: The imaginative set design, the articulate lighting and the intriguing musical choice.

Pros: The imaginative set design, the articulate lighting and the intriguing musical choice. Cons: Some lines fall flat, due in part to the delivery and in part to the script itself. The new-born Playground Theatre entices its first audiences with a piece of new writing about Picasso's controversial relationship with his women. To do so, it features on stage its co-artistic director Peter Tate as the title role and three young women as some of the painter's most important mistresses. Adele Oni is Geneviève Laporte, the journalist who interviewed Picasso when she was 17 and later started a relationship&hellip;

Pablo Picasso's reputation as a womaniser is under scrutiny in The Playground Theatre's inaugural production, but the beauty of the venue overshadows the quality of the play.

User Rating: Be the first one !
The new-born Playground Theatre entices its first audiences with a piece of new writing about Picasso’s controversial relationship with his women. To do so, it features on stage its co-artistic director Peter Tate as the title role and three young women as some of the painter’s most important mistresses.

Adele Oni is Geneviève Laporte, the journalist who interviewed Picasso when she was 17 and later started a relationship with him. Claire Bowman plays Marie-Thérèse Walter, mother of Picasso’s second off-spring, seduced when she was a young maiden. Alejandra Costa appears in the role of Jacqueline Roque, the artist’s second and manipulative wife, who also prevented his family from attending his funeral. More of his lovers are also introduced on screen, including Italian actress Milena Vukotic as his first wife Olga Khokhlova.

Comparing himself to the minotaur – and visibly influenced by the taurine mythology even in his paintings – the man is portrayed as a self-centred brute, whose claws are always ready to grab a female body and momentarily appease his insatiable libido. Tate’s rendition of the character feels artificial and receives minimal support from the supporting cast’s limited palette. The delivery is unpassionate and fails to establish a connection with the audience

Feeling more like a trial than a biopic, Terry D’Alfonso’s characterisation of the artist is unimaginative and often relegated to descriptions of a disturbed mind, rather than remarkable actions. In the flimsy structure of the script, his obsession with women is evenly counterbalanced by their attraction to him, which remains unmovable, despite his tyrannical bouts. As a result, the play is disturbing but fails to touch the right emotional chords.

Inevitably, its lack of refinement is overshadowed by the quality of the production values and, even more, by the neoclassical elegance of the venue. Once a bus shed just off Latimer Road, The Playground Theatre is now adorned with stonewashed wallpapers and lacquered furniture, and its foyer with crystal chandeliers is a cosy retreat in a cold and rainy evening.

Inside the auditorium, Klara Zieglerova’s round set is a sandy bullring where Picasso’s fiery lust overthrows his public image. Shades of red, green and purple drench the space, dominated by the male figure, and burning melodies offer a temporary pause for the performers, who remain on stage throughout the 75 minute drama.

On this occasion, the suspension of disbelief doesn’t help me to forget that I’m watching a performance in a theatre and I’m definitely more impressed by the container than by the substance. Picasso should be a play about passion, which is sadly, the big absentee in this production.