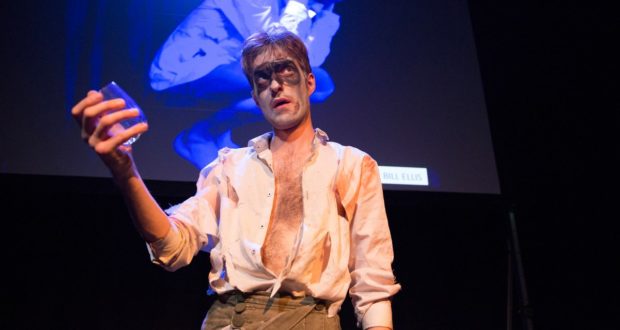 Pros: A multi-layered concept, deftly handled by Morpurgo, who has the audience eating out of the palm of his hand.
Cons: Audience participation elements might deter some theatregoers. Also, the Soho Theatre’s side-view seating makes it easy to miss some of the jokes.
Joseph Morpurgo: Hammerhead, Soho Theatre – Review

Pros: A multi-layered concept, deftly handled by Morpurgo, who has the audience eating out of the palm of his hand. Cons: Audience participation elements might deter some theatregoers. Also, the Soho Theatre’s side-view seating makes it easy to miss some of the jokes. Have you ever sat through a highbrow 9-hour vanity project based on Mary Shelley’s Frankenstein, followed by a post-show Q&amp;A? Nope, neither have I, but Joseph Morpurgo’s Hammerhead takes that concept and runs with it, imagining a one-man Frankenstein with 85 painstakingly portrayed characters and its own comedy catchphrase. The audience for Hammerhead becomes the audience&hellip;

A cleverly-constructed and self-aware comedy show, centred on an over-the-top 9-hour stage adaptation of Frankenstein. Delivers belly laughs throughout, and demands repeat viewing.

User Rating: Be the first one !
Have you ever sat through a highbrow 9-hour vanity project based on Mary Shelley’s Frankenstein, followed by a post-show Q&A? Nope, neither have I, but Joseph Morpurgo’s Hammerhead takes that concept and runs with it, imagining a one-man Frankenstein with 85 painstakingly portrayed characters and its own comedy catchphrase. The audience for Hammerhead becomes the audience for Frankenstein, holding out for the promised post-Q&A wine and cheese, but you won’t need such incentives to stick around for this brilliant hour of conceptual comedy.

Morpurgo plays an extreme version of himself: a dangerously ambitious alter-ego convinced that his unfathomable diagrams of plot structure make sense. He believes his ‘lifetime’s work’ will be recognised by critics and the public, despite glaring warning signs that his Frankenstein has already been declared dead on arrival.

The Q&A is shaped by pre-written questions: some read by unsuspecting audience members, the rest from various messaging platforms, including FaceTime, AOL Messenger and, er, beyond the grave. Pieces of Frankenstein, from book quotes to script pages and brilliantly daft promotional tactics, are seamlessly interspersed via the screen at the back of the stage. Terrible Frankenstein posters and leaflets leave the audience howling with laughter (however, the slick poster for Hammerhead, and its actual title, don’t give enough away, and seem far too vague).

Anyone who has sat through a cultural Q&A session will recognise some of the questions asked: I won’t spoil them, but there’s an overly rambling one, a totally off-topic one and an ‘attack mode’ one. Whilst Morpurgo’s character is pompous, you do begin to feel sorry for him as he tries to defend Frankenstein, particularly the heavyweight visual and audio cues needed for its nine-hour running time.

Due to a mix-up, I ended up seeing Hammerhead in the side view seats at the top of the Soho Theatre, with a limited view of the stage. This wasn’t ideal for reviewing – especially when the man next to me insisted on leaning forward throughout the show – but it gave a true punter’s perspective. You do need to be in the main seating area to get the most out of Hammerhead; there are several sections I could barely see from the cheap (albeit comfy) seats.

As the Q&A rolls on, we’re treated to glimpses of Frankenstein’s awful commercial and artistic compromises: an awkward sponsorship deal and British Council funding, donated sound effects, and an unforgettable Kickstarter-driven vanity musical he’s been forced to create, called Tim Shipman: Chartered Surveyor. Though it’s all good tongue-in-cheek fun to watch, in our current arts climate of budget cuts, painfully high rent and poorly-paid jobs, Morpurgo can’t be drifting far from reality for some performers, especially at the Edinburgh Festival Fringe, where the show debuted and is set. It famously costs thousands of pounds to take a Fringe show to Edinburgh, and you may not break even (see Lyn Gardner’s revealing Guardian feature, from 2015, for proof). Repeat mentions of the next show in the space (like Frankenstein, it’s fictional and deliberately weird) add to the conveyor belt feel that must irritate Fringe performers.

In contrast to the prospect of a monstrous 9-hour Frankenstein, I could have happily watched Morpurgo for longer, and could easily see Hammerhead again. I don’t think the real Morpurgo could bore anyone with this show.