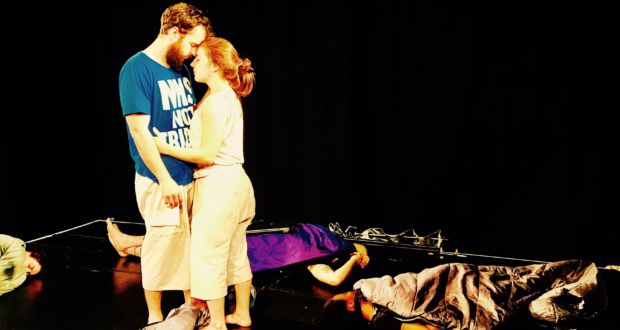 Cons: A messy script that feels more like an extract from the young socialists handbook.
A Nazi Comparison, Waterloo East Theatre – Review

Pros:  A fascinating premise comparing fascism with modern right wing politics. Cons: A messy script that feels more like an extract from the young socialists handbook. Now keep your wits about you because this one will exercise those little grey cells. A Nazi Comparison is based on Schlageter, written by Hanns Johst, Hitler’s favourite playwright and Nazi Laureate. The play was performed on Hitler’s birthday in 1933 and is widely regarded as the ultimate expression of Nazi ideology.  The play is a biographical account of Albert Leo Schlageter, a member of the Freikorps who was executed by the French&hellip;

While ‘Corbynistas’ will love this diatribe against anyone (or anything) leaning to the right, A Nazi Comparison isn’t for those looking for a balanced, intellectual show.

User Rating: 1.05 ( 1 votes)
Now keep your wits about you because this one will exercise those little grey cells. A Nazi Comparison is based on Schlageter, written by Hanns Johst, Hitler’s favourite playwright and Nazi Laureate. The play was performed on Hitler’s birthday in 1933 and is widely regarded as the ultimate expression of Nazi ideology.  The play is a biographical account of Albert Leo Schlageter, a member of the Freikorps who was executed by the French after World War I. A key scene in the play is when he and wartime comrade Friedrich Thiemann are studying for a college examination but debate whether academia is worthwhile when the nation is not free. Thiemann argues he would prefer to fight rather than study. The play features the frequently quoted line ‘when I hear the word culture, I reach for my gun’.  Is there any relationship between Hitler’s twisted world view and modern politics?  This adaptation sets out to explore the subject but ultimately runs into a brick wall.

The story begins in modern day London. Claire is studying at University College London and stumbles into a protest march supporting the victims of Grenfell Tower.  She is immediately smitten by eco warrior and class activist, Craig, who saves her from a knife wielding madman. Decked in a blue tee shirt bearing the legend ‘NHS not Trident’ it becomes abundantly clear what Craig and his cronies stand for. Claire is approaching a key stage in her studies as she prepares for a speech at UCL when she becomes conflicted thanks to Craig’s influence and having happened upon an English translation of Schlageter.  The play makes her question whether there are parallels between modern and pre-war political ideology. The tumultuous build up to her speech at UCL forces Claire to confront some painful home truths and to consider how destructive political ideals can be.

Whilst A Nazi Comparison makes some interesting points, these moments of clarity are rare as the script descends into a socialist rant that would make Momentum proud. A communal sing song at Craig’s squat results in a song called “fight to unite”, which sounded like something John Lennon threw away during his Plastic Ono phase.  Two short films bookended the play: the first a bitter commentary on how biased the right wing media are, particularly when reporting on (who else) but Jeremy Corbyn. They seem to forget that editorial bias is counterbalanced by social media – there’s nothing to stop Jezza going on Twitter to chuck some mud back at those nasty boys who bullied him in the playground.  The second film was, predictably, a montage of Donald Trump’s greatest hits and needs no further explanation.

Claire’s speech jumps on every left wing bandwagon in the book: imperialism, climate change, the war in Iraq, sexed up dossiers, the occupation of Afghanistan, greenhouse gases, Syria, North Korea, drowning refugees and Donald Trump (again), apparently setting the modern benchmark for Nazi atrocity(?). I’m astonished Margaret Thatcher failed to get a mention, which I’m sure would have disappointed the old girl. The overall tone is patronising and assumes people aren’t capable of forming their own opinions. A Nazi Comparison is quite simply overcooked political posturing that belongs in the student union bar.

Previous: The Strange Case of Dr Jekyll and Mr Hyde, Greenwich Theatre – Review
Next: A Day by the Sea, Southwark Playhouse – Review