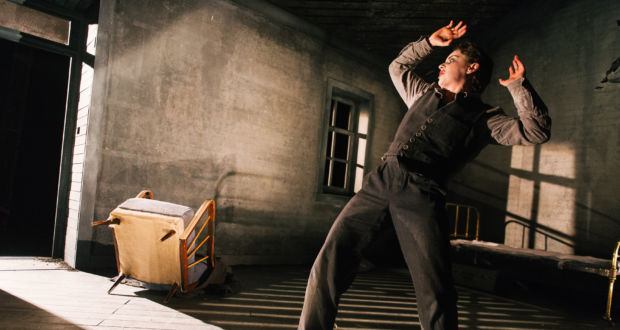 Pros: Superbly performed one-woman show with outstanding lighting, imaginative projections and an ingenious set. Cons: The pedestrian script needs more poetry. Wilton’s Music Hall is a lovingly unrestored early Victorian theatre, hidden down an alley between Wapping and Whitechapel. The bare floorboards and walls stripped back to the brick in the entrance and bars give way to a magnificently tatty auditorium, all flaking paint and once-gilded spiral columns. The stage itself, raised six feet off the ground – it was built at a time when the stalls audience would have stood – is tilted at an angle making it&hellip;

A magnificent depiction of crossdressing for survival in war-torn Germany, brought to life in a scintillating performance.

Wilton’s Music Hall is a lovingly unrestored early Victorian theatre, hidden down an alley between Wapping and Whitechapel. The bare floorboards and walls stripped back to the brick in the entrance and bars give way to a magnificently tatty auditorium, all flaking paint and once-gilded spiral columns. The stage itself, raised six feet off the ground – it was built at a time when the stalls audience would have stood – is tilted at an angle making it impossible to be visible to all. For Man to Man, the faded paintwork continues through onto the set – a small apartment containing a bed, a chair and a suitcase, with a single window and door on the back wall.

It’s on this stage that we meet an elderly man – or so it appears – berating the work-shy loafers outside from his window. Dressed in tweed trousers and waistcoat, with a strong Glaswegian accent, he’s the epitome of the boorish, drink-sodden retired manual worker. But when he transforms into Ella, the voice changes to that of a demure young woman as she relates her life story.

Living in pre-war Germany, Ella is seduced by crane driver Max Gericke. They fall in love and get married. With all parts played by the superb Maggie Bain, we cut back and forth between Ella and the older Max as the story is pieced together. Max dies of cancer less than two years after their wedding, and Ella must take on his persona – cutting her hair short, wearing his clothes and operating his crane – in order to survive. Fortunately, as a crane driver she’s separated from the rest of the workforce, which gives her the opportunity to develop her crossdressing masquerade.

This is the story of survival as a German civilian through the war years, with Ella constantly having to prove her masculinity through beer and schnapps: ‘I could avoid the church, but not the pub.’ The post-war years present their own challenge – ‘What good is peace when there’s nothing to eat?’ – and Ella’s tale takes us through the fall of the Berlin wall to the near-present.

Bain’s immaculate representation of Ella and Max is vibrant physical theatre, making full use of the ingenious set – cramped in the cell of the window space, suspended from the walls, disappearing through a hidden trapdoor. Designer Richard Kent has created a space in which the walls can turn translucent and the hidden handholds can turn the stage into a dynamic playground.

Although Maggie Bain is the only performer, there are two other stars in this production: the lighting and the projections. The lighting, by Rick Fisher, is an expressionist fantasy reminiscent of The Cabinet of Dr. Caligari: sharp angles, vast shadows, prison bars, and a constantly shifting interplay between light and shade that transforms the single room into a dozen locations. Andrzej Goulding’s projections bring the walls to life. When Ella breathes on cold glass, frost crackles out from the window to fill the entire room; other characters appear as ghostly projected shadows behind her. There are some moments of theatrical tour de force, such as when Ella, having given birth to a mock baby by expelling a cushion from beneath her waistcoat, raises the cushion in her arms – but her shadow depicts her raising a living baby. The whole production is backed by Mike Walker’s haunting soundtrack, a shifting collage of mood-setting resonance.

Directed and performed with tremendous originality and energy, the only weak component of Man to Man is the script. Translated from a 1982 play by the German playwright Manfred Karge, the narration contains too many hackneyed phrases – ‘death warmed up’, ‘beggars can’t be choosers’ – that detract from the action. A performer of Bain’s skill needs to be given more poetic dialogue, with less reliance on cliché and plodding language.