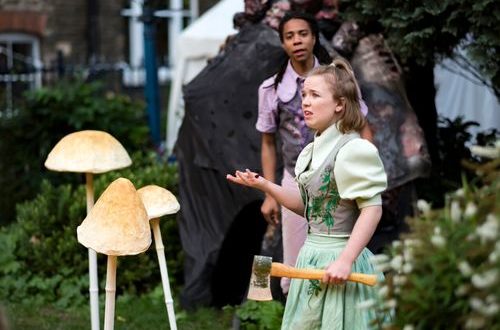 Pros: This is entertaining, creative, eye-catching and full of good moral values.

Pros: This is entertaining, creative, eye-catching and full of good moral values. Cons: The merging of two-well known stories adds a great deal of complication. As something of an Iris Theatre super-fan, I couldn’t wait to review their latest offering, a kid-friendly production of Hansel and Gretel and the Witch Baba Yaga, in the charming St. Paul’s Church in Covent Garden. The format matches their previous outstanding productions, as the audience is led through a wonderland of stages and scenes both outside in the gardens and inside the church, on a fantastic journey through the story. But this isn’t your&hellip;

It’s a strong production and one kids are sure to enjoy.

User Rating: Be the first one !
As something of an Iris Theatre super-fan, I couldn’t wait to review their latest offering, a kid-friendly production of Hansel and Gretel and the Witch Baba Yaga, in the charming St. Paul’s Church in Covent Garden. The format matches their previous outstanding productions, as the audience is led through a wonderland of stages and scenes both outside in the gardens and inside the church, on a fantastic journey through the story.

But this isn’t your traditional Hansel and Gretel. This interpretation weaves in the story of Baba Yaga, and sets us in a land ruled by harsh militia. A black stain is spreading through the land, and children are disappearing regularly. Hansel and Gretel are abandoned in the forest by their desperate (and selfish) parents and must contend with a series of Baba Yagas (witches) as they make their way back to town to try to save their community from the evil that plagues it.

There is so much imagination and creativity on display in bringing this world to life. The scenery and costuming are excellent. There’s an interesting insertion of Soviet communism into the underlying thread of the play which works well for the militia, but the outfitting and staging of the three witches is a particular favourite. Part Russian folklore, part garish Ukrainian Eurovision drag act (Verka Serduchka would be proud), they are enticing and eye-catching. The gingerbread house and the hut on chicken legs are excellent builds, and the movements and transformations in them are great.

There’s clever puppetry here, too, and the use of the bird puppets to show time passing between night and day is smart. I couldn’t get enough of the inclusion of the Owl (Harpier) in the story, and he seemed to have the young people charmed as well.

There’s no question that the acting performances are top drawer. Deshaye Gayle and Rosie Abraham as Hansel and Gretel respectively are excellent; they play young wonderfully, and bring their roles to life with a stubborn and childish conviction in each of their beliefs. The other actors rotate into different roles as needed through the production. Nick Howard-Brown is at his best playing Koschei in his final scene, but is excellent throughout. The three witches are wonderfully split between Josie Brightwell and Will Kelly, both giving wonderfully humorous depictions. Jennifer Clement is brilliant on the guitar throughout, but great as the talkative and determined Vasilisa.

The can-do attitudes of Gretel, Vasilisa and – eventually, as part of his journey – Hansel are a great example for kids. There are also a few gross-out scenes which have me cringing, but the kids shrieking with laughter, so they must be onto a winner.

Where questions do arise is in the merging of the two stories. Both Hansel and Gretel and the witch Baba Yaga are full-length stories on their own. Bringing them together does enhance the journey that Hansel and Gretel go on, particularly when it comes to the fairly selfish Hansel’s personal development, but it also complicates things somewhat. Gretel tries to summarise the back-story to the Baba Yaga in the early stages of the performance, but it becomes a hard-to-follow monologue without illustration or illumination. At this stage in the production, it’s hard to see the relevance and hard to follow the confusing naming structure.

In practice, it’s better; we understand the journey Hansel goes on to redeem himself and the inclusion of the funny and talkative Vasilisa is great, even if it does mean we miss Gretel’s tenacity and empathy for a significant portion of the play.

Overall, it’s a great production for kids. Even after the sun goes down and the night gets chilly, they are still watching with wide eyes and unfaltering attention. The costumes are such a glorious spectacle, and there’s so much magic on display here. The ending is stunning, if not a wee bit scary, and the life lessons on show about belief, determination, and friendship are wonderful for young people.