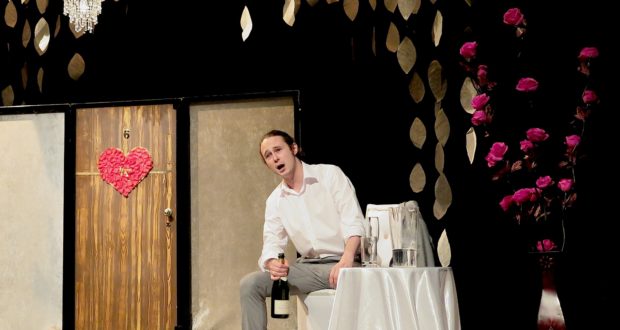 In August 2017, London’s opera enthusiasts and theatregoers eager for something different can head to the Bridewell Theatre for the brand-new festival Opera in the City. Spanning over two weeks from 1-12 August, the event provides a varied line-up of rarely performed fin de siècle classics and groundbreaking new commissions, all rigorously sung in English. Starting with the gripping Mozart & Salieri and Mascagni’s melancholic Zanetto, going through Zemlinsky’s A Florentine Tragedy and the heart-warming Lanza, the season will conclude with the innovative multidisciplinary works of Simone Spagnolo and Sarah Toth. Thanks to the venue in the heart of the City and the affordable prices, artistic director Pamela Schermann promises an exciting and accessible programme that will appeal to both regular opera audiences and those new to this genre.

A launch event held last May at the theatre delighted the audience with excerpts from some of the calendar’s titles and a production of the original Mozart classics’ medley A Night in Vienna. Set in the reception area of the Vienna Grand Hotel, this amusing pastiche featured music from Don Giovanni, The Magic Flute, Cosi Fan Tutte and The Marriage of Figaro, with an English libretto written by the festival’s artistic director Pamela Schermann.

The Opera in the City season opens with a double-bill of Nikolai Rimsky-Korsakov’s ‘crime-thriller’ Mozart & Salieri and Pietro Mascagni’s Zanetto. Rimsky-Korsakov’s opera follows the apocryphal legend that Antonio Salieri poisoned his rival and fellow composer Wolfgang Amadeus Mozart out of jealousy over his talent. Russian composer Nikolai Rimsky-Korsakov based his libretto on a short story written by Alexander Pushkin, the same that inspired Peter Shaffer’s play and film Amadeus.

The charming Nick Dwyer as Salieri will have to keep up with the extravagant portrayal of Mozart offered by Roger Paterson, and a taster of the skirmishes between the two protagonists at the May event proved very entertaining. This Time Zone Theatre production was also one of the Best Opera finalists at the 2016 Off-West End Awards.

Mascagni’s opera Zanetto is a gentle tale about the failed love between wandering poet Zanetto (Sophie Goldrick) and rich courtesan Silvia (Becca Marriott), who lives on her own and has forsworn love entirely. With a new libretto written in English, director Pamela Schermann explores this troubled relationship as that of two women who live in London and are doomed by their inability to drop their guard and give in to love.

Together with Mozart & Salieri and Zanetto, Alexander Zemlinsky’s A Florentine Tragedy completes the in-house project Fin de Siècle, a trilogy of works composed around 1900 and presented in original and contemporary productions. With a libretto by Oscar Wilde, the opera explores the erotic triangle of a woman, her husband and her lover that soon becomes a cat-and-mouse game. Wilde’s poetic text is brought to life by Zemlinsky’s sublime music, which perfectly captures the atmosphere and paints a picture of love, passion, murder and betrayal. This one-act piece was first performed in 1917 and, in this innovative production, is sung in English and accompanied by piano.

Another event in the Opera in the City calendar is Lanza, a work based on the life of 1950s singer and movie star Mario Lanza both written and performed by Andrew Bain. Set in a hospital room in Rome, the drama interweaves the singer’s most famous hits with ruminations on his personal life, examining the nature of fame and trying to explain why a man who seemingly had the world at his feet spiralled out of control. The operatic hits and lighter classics include E Lucevan le Stelle, Granada, You’ll Never Walk Alone and Lanza’s greatest tune Be my Love.

The inaugural festival will culminate with a multi-disciplinary double bill pairing Simone Spagnolo’s Even You, Lights, Cannot Hear Me with Sarah Toth’s Nero Monologues. Based on a monologue by Anton Chekov’s The Seagull, Spagnolo’s composition merges elements of operatic singing, chamber music and performance art, exploring a futuristic vision of the end of time. Mezzo-soprano Kate Symonds-Joy and baritone James Schouten are depicted as two beings embodied into one entity, wandering in a surreal world. The two-headed creature sings in perpetual motion, as the sound of a piano echoes through all of its harmonics.

Nero Monologues is a multi-art form chamber opera offering a humanised portrayal of the first-century emperor of Rome in his final hour, exploring a few of the influences and personal traumas that may have contributed to his tyrannical ruling. With music by Monteverdi, Handel, Kurtág, Copland and Peter James Learn, layered with poetry by celebrated Australian poet Geoffrey Lehmann, Nero Monologues exposes familiar themes like abandonment, abuse, passion, sexual identity, love, political ideals and power struggles. The opera is written for singer, dancer, piano and string quartet, and is performed by creator Toth.

With such a varied and exciting programme, Opera in the City offers strong narrative pieces rigorously sung in English, which will appeal to both regular opera audiences and those new to opera. Thanks also to its affordable ticket prices for every performance, the festival is bound to become a staple of London’s classical musical scene.

Opera in the City will run at the Bridewell Theatre from 1 to 12 August 2017.

Previous: Just to Get Married, Finborough Theatre – Review
Next: Lovestuck, The Cockpit – Review