Home » Reviews » Off West End » The Enchanted – The Bunker – Review 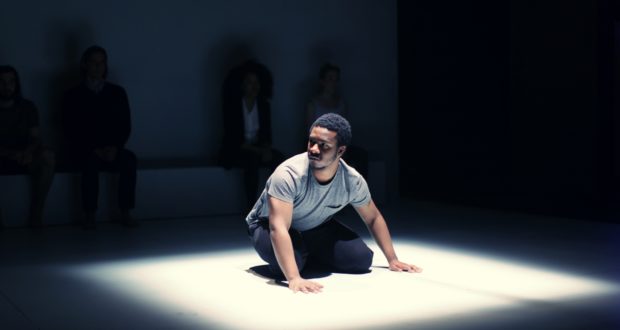 The Enchanted – The Bunker – Review

Pros: A compelling central performance from Corey Montague-Sholay who gives feeling and depth to his role as narrator, and a story that grips when allowed space to do so.

Cons: Too much distracts from the central story, for the sake of cleverness.
The Enchanted – The Bunker – Review

&nbsp; Pros: A compelling central performance from Corey Montague-Sholay who gives feeling and depth to his role as narrator, and a story that grips when allowed space to do so. Cons: Too much distracts from the central story, for the sake of cleverness. Heading to the Bunker tonight just felt so surreal that it surely had to affect my views on this show. For those who are unaware of this highly unique theatre in a converted underground car park: it sits not far from London bridge, the site of last Saturday's attack. So close, in fact, that the other&hellip;

Somewhere in here is a great story waiting to be freed, but it gets lost in the gimmicks of the performance that dominate the action.

User Rating: 2.8 ( 2 votes)
Heading to the Bunker tonight just felt so surreal that it surely had to affect my views on this show. For those who are unaware of this highly unique theatre in a converted underground car park: it sits not far from London bridge, the site of last Saturday’s attack. So close, in fact, that the other end of the road it sits on was still closed and under police cordon. So close that the previews of the show were cancelled because the area had been completely closed off until the previous night. This did mean that rehearsals and set up were restricted, something that clearly should be taken into consideration. To give the cast their credit, any lack of rehearsals or issues with staging were barely noticeable.

The Enchanted is a show about Death Row, a topic that takes on an eerie relevance after the real events of a few days earlier. We’re led through proceedings by Arden, an inmate waiting for that final act of his life. Arden acts as narrator, telling his own story alongside that of fellow inmate York. Binding their stories together is The Lady, an investigator trying to find cause to save these lost souls. It’s a brilliant concept for a plot, and one that gives the play depth and intelligence when allowed its own space to develop. Had the plot been the focus of The Enchanted, this could easily have been a five star review.

It’s such a shame then, that the production regularly loses focus on the main story. For reasons I can’t really comprehend, the whole thing becomes hell-bent on making arty digressions. Between brilliantly scripted scenes, there are moments that I can only describe as ‘art student pretentiousness’. Actors draw and write on floor and wall, but it is often difficult to see what it is we’re meant to be looking at, or why the cast stand behind Arden, swaying in time with his movements as he gives impassioned speeches. Then, as our narrator talks of his and York’s childhoods, the actors produce small puppets. Presumably they are meant to provide a clever scaled-out echo of the inmates’ childhoods, but they end up being distracting and annoying, rather than making a real contribution to the moment. Perhaps that was because of their size in the space – the puppets were just too small to be able to display emotion clearly via their movement. There was a noose on stage all night and, in the end, the only thing that could have made me care about the puppets was if they had decided to hang one.

Somewhere behind all the superfluous artistic movement, the writing, and the puppets, there is a story that promises so much. In fact it’s a story that makes me want to explore the book by Rene Denfeld, on which the play is based. There are stunning scenes where The Lady seeks out York’s childhood, meeting his aunt (beautifully played by Georgina Morton in a scene which almost stole the show) as well as the one boyfriend of his wayward mother who actually cared. In these scenes, the story is spellbinding – the clarity of them revealing volumes about the characters, making the live art showboating parts seem even more like so much noise.

To me, The Enchanted would work a lot better if the production focused more on the plot than on the rather self-satisfied storytelling apparatus around it.