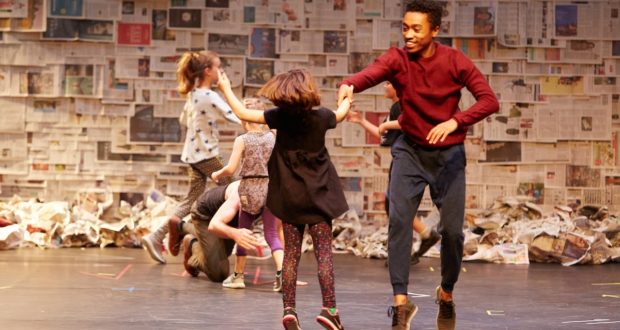 Cons: It’s only on in London for ten days.
Men & Girls Dance, The Place – Review

Pros: Funny, moving, and hugely watchable. Cons: It’s only on in London for ten days. Walking into The Place theatre it is obvious something different is happening. Five men and nine girls are absorbed in activity, working together to create one huge sheet of newspaper by taping sheets together. Huge amounts of masking tape are pulled out, making that strangely satisfying, scratchy sound. Adults and children are chatting away to each other as they work. Pop music plays in the background, and the house lights remain up so the audience keep chatting too, uncertain as to whether the piece has officially&hellip;

A unique, timely and unforgettable dance work that will make you laugh, cry and think.

Walking into The Place theatre it is obvious something different is happening. Five men and nine girls are absorbed in activity, working together to create one huge sheet of newspaper by taping sheets together. Huge amounts of masking tape are pulled out, making that strangely satisfying, scratchy sound. Adults and children are chatting away to each other as they work. Pop music plays in the background, and the house lights remain up so the audience keep chatting too, uncertain as to whether the piece has officially started – although it’s already fascinating to watch.

Men & Girls Dance does what it says on the tin – but in 2017, this is controversial territory. This piece is a heartfelt response to the culture of suspicion and mistrust that has grown up around the issue of adult men and girls relating to one another through play and touch. A meticulous two-year research period took in feedback from teachers, parents, and social workers as well as the dancers involved. The result is a performance piece with three elements.

In addition to the performance itself, the company (Fevered Sleep) publish a newspaper containing reflections and responses to the piece from anyone and everyone. This paper is well produced and easy to read, and ties in brilliantly with the newspaper littered across the set – offering a positive alternative to negative media. A member of the company is also available before and after the show in a ‘talking place’ where people can reflect, ask questions, and leave written responses. This felt incredibly valuable, and democratic. In each city the project visits the company has engaged with the community, establishing themselves in cafes and community centres to offer people the opportunity to share their responses.

The piece itself was an hour of pure joy. The beginning was particularly strong. Nine 8 to 11 year old girls and five professional male dancers faced one another from opposite sides of the stage. In silence they tentatively offered movement suggestions one at a time, gradually reducing the distance between themselves as they mirrored one another. The atmosphere was warm, curious, and playful. The newspaper was used in wonderfully inventive and magically theatrical ways which I won’t spoil for you.

What was clear throughout was the complete safety and tender respect with which the male dancers related to the girls, and how much the girls relished the freedom and agency their partners gave them. It has a structured frame – some sections are always the same – but much is improvised, different in every town, as the company gives the girls who participate freedom to move how they want to.

Everything was a pleasure to watch, from a fluid synchronized section for the male dancers, to the girls running joyfully across the stage, barely containing their glee as they were lifted and swung around. They were also given a voice; speaking into microphones, they watched and described in their own words a male dancer’s movements. And for balance, the men spoke too.

In one of the most electrifying  and poignant sections, a male dancer sat with one of the girls and described in simple, straightforward language what he could see: the creases on her knuckles, the wisps of her hair, the warmth of her hand. “I can see her looking at me” he said. Turning to the audience: “and I can see you looking at me.” Eddie Nixon of The Place calls this “the most beautifully political, gently radical dance we’ve ever put on our stage.” Go and see for yourself.