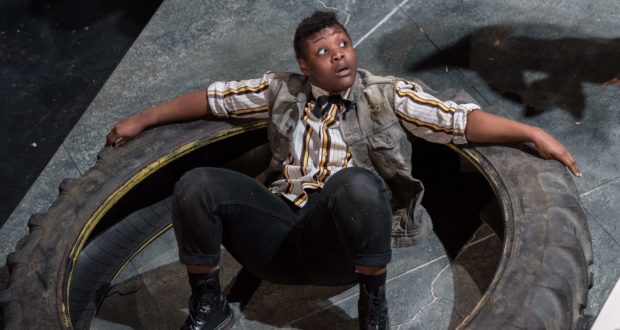 Pros: A perfect blend of fun and social commentary to please those looking for either just pure fun or a little depth to their theatre experience; one hell of a performance by Erin Doherty who almost completely steals the show.

Cons: The balance between live band and vocals isn’t always perfect, especially with the band almost in the side seats next to us, meaning at times it was difficult to make out lyrics.
Junkyard, Rose Theatre Kingston – Review

Pros: A perfect blend of fun and social commentary to please those looking for either just pure fun or a little depth to their theatre experience; one hell of a performance by Erin Doherty who almost completely steals the show. Cons: The balance between live band and vocals isn’t always perfect, especially with the band almost in the side seats next to us, meaning at times it was difficult to make out lyrics. I’ll confess, I was more than a little dubious heading off to the marvellous Rose Theatre in Kingston. For starters, Junkyard is billed as a musical.&hellip;

Jack Thorne is cementing his place as one of our generation's great writers. It appears he’s borrowed some magic dust and sprinkled it liberally over this Junkyard.

User Rating: Be the first one !
I’ll confess, I was more than a little dubious heading off to the marvellous Rose Theatre in Kingston. For starters, Junkyard is billed as a musical. Add to that its running time of two hours and twenty, and it’s sounding like a typical West End affair; which translates as ‘all style, no substance’. Of course there was the added factor that its writer Jack Thorne had something to do with some play about a grown up wizard, which may have people queueing around the block for tickets, which to me has the appeal of being slapped repeatedly around the face with a wet fish.

But oh how wrong could I be? Yea, of little faith. Before he was writing about wizards, he was writing adaptations of Scandinavian horror stories such as Let The Right One In, (one of my greatest theatre experiences), or social commentary pieces such as Hope. Junkyard has much more in common with these than I’m sure it does with wizards.

On its surface Junkyard is quite simple. It’s 1979 and a bunch of troubled kids are encouraged by a teacher to help build an adventure playground.  When things go wrong, the school decides to scrap the project, much to the anger of all those involved. Under that shallow surface though, Thorne continues a themes that he explored in Hope, how government cuts are damaging the future for our children. But whilst in Hope he approached it much more directly, Junkyard explores the same topic with more gentleness, and in doing so, it’s accessible to a wider audience.

The first act of the show is all lightness and fluffiness as Thorne sets the scene and the junkyard is built in front of us.  This half belongs completely to Erin Doherty as Fiz, not quite the leader of the gang, but the one that they all rally around. Her cocksure attitude and deadpan delivery as she narrates, acts and sings (with the greatest Bristolian accent) sets the tone perfectly. The second act has a distinct lack of her which is a real shame. Whilst the rest of the cast shine bright, Josef Davies also deserves mention, portraying misunderstood thug Ginger with care, an equal mix of stupidity and softness as he promises he won’t actually use the weapon of nails in a bag he proudly waves around at one point.

It’s the second half of this play that gives it depth. It’s here that Thorne’s social conscious comes out, as the ragtag bunch of kids fight for their friends and their playground, and the one teacher who believes in them stands up for not only them, but for every teen who hasn’t been given a chance before being discarded on the scrapheap; yes, there is a strong metaphor here between junkyard and damaged children. However, the social commentary isn’t rammed down your throat, it’s way more subtle, creeping over you as you are enchanted by the joy and humour present.

Now I did mention my concerns over labelling this a musical. The story mostly unfolds in spoken word with music injected randomly. At times the musical sections last mere moments as the cast burst into song for a line or two to emphasise a point. It gives the play a deliberate roughness; another metaphor, these kids are more than a little rough, much like the junkyard they are building.

This play could, no SHOULD, be destined for the West End. It certainly deserves that audience. There is enough depth to appeal to those of us who want more than a catchy song and a well-oiled dance routine, not that both aren’t present as well. Please, don’t let one play about a wizard put you off trying this out.