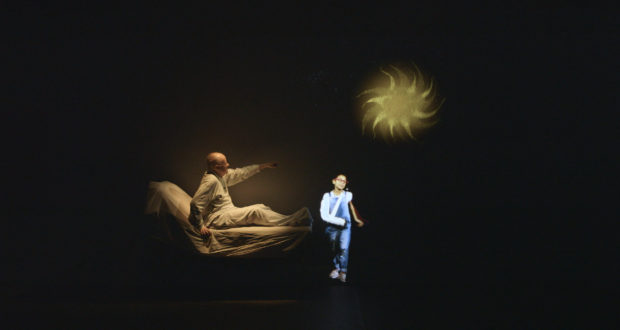 Cons: Time constraints made some episodes of the story hard to follow
The Fall, Acklam Village Market – Review

Pros: Gorgeous visuals, fascinating live score, welcoming atmosphere Cons: Time constraints made some episodes of the story hard to follow Tucked right at the top of Portobello Road under the Westway flyover, Acklam Village Market isn't the easiest place to find if you've not been there before. But once you do, it's worth the trek – a red iron gate opens rabbithole-like into a bustling wonderland of streetfood stalls packing up for the night, theatre-goers arriving and a warm welcome from the event's host. The performance space was invitingly cave-like, flanked by a bar on one side, an exhibition wall on&hellip;

An arresting, ambitious – and all-too-short - hour of multi-media storytelling

User Rating: Be the first one !
Tucked right at the top of Portobello Road under the Westway flyover, Acklam Village Market isn’t the easiest place to find if you’ve not been there before. But once you do, it’s worth the trek – a red iron gate opens rabbithole-like into a bustling wonderland of streetfood stalls packing up for the night, theatre-goers arriving and a warm welcome from the event’s host. The performance space was invitingly cave-like, flanked by a bar on one side, an exhibition wall on the other, and facing a shallow stage bare but for a modern hospital bed and a blank, screen-style backdrop. My curiosity grew, as the room began to fill incrementally, cinema-style.

The Fall is based on Tarsem Singh’s surreal 2006 film of the same name. A man (Roy) paralysed after a freak accident, meets a young girl (Alexandria) in hospital. Over a series of encounters, he weaves a made-up epic story of revenge and companionship, using narrative cliffhangers to lure Alexandria into stealing the drugs he needs for his suicide. It’s an arresting story, and the show made a point of following the film closely. Dialogue was amplified to suggest a cinema sound system, and the chain of events unfolded in the same sequence. Much of the action happened in a virtual on-screen world too but Roy remained, apart from the audience the only ‘real’ tangible thing.

The way that on-screen and off-screen worlds merged was the most fascinating and original thing in this staging of The Fall. Despite having ‘normal’ conversations throughout the show, Alexandria’s character existed entirely as a (very convincing and life-like) screen projection.  There were some lovely moments of interaction between the ‘real’ and the ‘screen’ worlds that looked a lot simpler than I’m sure they really were. Roy’s story, when it began, flashed up as beautiful illustrated animations on the same screen. Alexandria’s character, though mostly projected as live video, occasionally joined the animated world of the story, and more so as the story became more immersive for her. It was strongly implied in the programme and the film, for those who had seen it, that each character was as real as the other, but the show cleverly kept certainty just out of reach. What was real? What was a figment of an imagination? Who was imagining whom? If Roy stopped telling the story, would the story disappear, or would he?

Animations were a joy to watch, the bright and lively illustration style complementing the narration well. With so much happening on screen, having the score played live was a welcome luxury that many small theatre companies could only dream of affording.

As in the film, there was the odd moment where the narrative got so surreal it was hard to follow: an episode where elephants appeared and then evaporated was pretty but oddly unnecessary. Similarly, as the story’s dark ending drew near, things started to seem rushed and slightly out of control in way that wasn’t quite deliberate enough for me to believe it was part of the story. The show was over too fast. It was so clear to me that an extra 10 minutes would have made for a more satisfying ending, that I wondered if there was some reason the company had been forced to cut it short. However the early finish did leave time for a good look at an exhibition that was thought-provoking enough to linger over, and send creative echoes into the rest of my weekend.