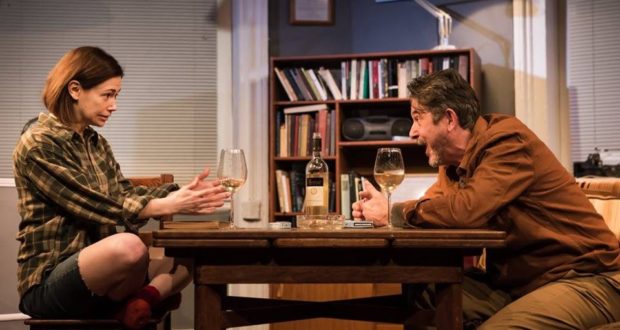 I’m Gonna Pray For You So Hard, Finborough Theatre – Review

Pros: Two fine performances and two scenes of pure drama that grip you until the final emotional moments.

Cons:  The opening is a struggle, especially the shouting that bounces around the small space way too much.
I’m Gonna Pray For You So Hard, Finborough Theatre – Review

Pros: Two fine performances and two scenes of pure drama that grip you until the final emotional moments. Cons:  The opening is a struggle, especially the shouting that bounces around the small space way too much. When you leave a theatre with your evening's plus one, excitedly discussing the play's strengths the entire walk back to the station, as well as the whole journey home, you know that it's been a good one.  But also agreed by us was that the opening ten minutes wasn't looking too promising. I'm Gonna Pray For You So Hard sees Adrian Lukis as&hellip;

Fine acting, fine script, intimate venue, even a pub downstairs, everything that good theatre should be.

User Rating: Be the first one !
When you leave a theatre with your evening’s plus one, excitedly discussing the play’s strengths the entire walk back to the station, as well as the whole journey home, you know that it’s been a good one.  But also agreed by us was that the opening ten minutes wasn’t looking too promising.

I’m Gonna Pray For You So Hard sees Adrian Lukis as playwright David, spending an evening with his daughter and budding actress Ella, played by Jill Winternitz.  As well as writer and actress, they’re also simply father and daughter, displaying classic characteristics of so many parent-child relationships. Parent aiming to project their beliefs and aspirations on their child. Child, absorbing it all, seeing the parent as their god, their one and only guide to how their life should transpire.  Those characteristics may be overblown and taken to their limits on the stage, but they are surely characteristics we can all see in ourselves and our families.

The play doesn’t start off with great promise. It takes a good ten minutes to hit its stride, maybe as it takes that time for the strong characters to develop.  In addition, Lukis’ delivery has such force that in such a small environment as Finborough Theatre, it actually jars.  It’s too loud, too booming, and almost distorted in this small space, making it difficult to understand, especially with the strong American accents.  For a while it almost feels as if he will shout Winternitz completely off the stage.  Thankfully it settles, or maybe we just become so absorbed in the otherwise superb acting and writing we learn to ignore it.  It might work better on a larger stage with more space to absorb the volume, but not so well here.

But once those initial concerns disperse, the hour long first scene flies by as we watch father and daughter discuss her performance, his own successful career and her future; just many things any parent and child might discuss. All this is escalated by the fact that her father is hardened and bitter with the whole world, teaching Ella that she has to want it beyond anything else, doing whatever is required to succeed, even hurting those you love.  It’s a brutal life lesson that goes through every emotion that can be crammed into the spaces. There is anger, happiness, accusations, and plenty of laughter, both on stage and in the audience.

As the evening progresses, moods swing, truths are told, feelings are hurt.  But throughout it all, Ella clearly thirsts for her father’s love and approval, something he cannot give until she has proved herself on the stage. This is a concept that comes back tenfold as the play hits its emotionally stunning conclusion in the shorter second scene, set five years after scene one.  And whilst the first scene is compelling, the second brings it all together perfectly in ways that you could just not see coming.

It’s the combination of great writing by Halley Feiffer and two stunning performances from Lukis and Winternitz that make this whole show compelling. The chemistry on stage seems real; Lukis’ bitterness and jealousy of others, Winternitz’s innocence, her love and hurt, often close together.  The clear sight of her tears filling her eyes during the second scene are as powerful as you would hope to see, and see you will when you are sat so close.

I’m Gonna Pray For You So Hard is a powerful piece of theatre that, those opening minutes aside, is as compelling as anything you could hope to see. And the chance to see it in such an intimate space, actors within reaching distance, just adds to the pleasure of the evening.  The discussion of its strengths on the way home are a bonus and one that only emphasised just how enjoyable this evening was.