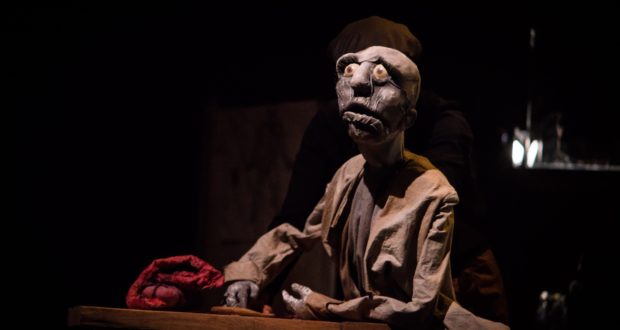 Cons: Although the individual elements were all good, but as a whole didn’t quite gel enough for that fourth star.
The Depraved Appetite of Tarrare the Freak, Wilton’s Music Hall – Review

Pros: Imaginative and clever puppetry; excellent singers, atmospheric venue; sad but true story. Cons: Although the individual elements were all good, but as a whole didn’t quite gel enough for that fourth star. Based on a true story, Tarrare was living in France in the 18th century, suffering from a condition called polyphagia, which basically means he would eat anything and everything that wasn’t nailed down. The show opens with a dark shadowy set in the atmospheric Wilton’s Music Hall, with a cabinet of curiosities at the back and an ominous looking operating table at the front of the&hellip;

Imagine Les Miserables meets Sweeney Todd done in the style of A Taste for Love (Dracula puppet comedy-rock opera at the end of Forgetting Sarah Marshall). If you are a fan of the weird and the wonderful you should definitely go and see it.

User Rating: Be the first one !
Based on a true story, Tarrare was living in France in the 18th century, suffering from a condition called polyphagia, which basically means he would eat anything and everything that wasn’t nailed down. The show opens with a dark shadowy set in the atmospheric Wilton’s Music Hall, with a cabinet of curiosities at the back and an ominous looking operating table at the front of the stage.  The cast members appear wearing their butcher’s aprons and flourish some nasty looking instruments at the audience.  We begin with Tarrare’s post-mortem leading us to a look back at his time in a freak show, his role as a spy in the army, his stay in hospital where he seems to have been experimented on in an attempt to find a cure and finally ending with his death, returning us to the post-mortem table.

The musicians (An-Ting Chang and Katy Rowe), singers (Michael Longden and Daniel Harlock), and puppeteers (Tobi Poster and Aya Nakamura) were all excellent. Michael Longden and Daniel Harlock are particularly impressive with their surprising vocal ranges.  The music veered between some catchy, ‘almost-but-not-quite’ show stopper songs in various styles, to sometimes sounding more like a backing track.  The puppets were suitably dismal for such a sorry tale, looking like they were wrapped in bandages in a ‘mummy’ fashion.  I overheard someone mention that they resembled the figure in Munch’s scream paintings, which is a good comparison and I wish I’d thought of it first.  Although the puppeteers are visible, they quickly merge with the puppets and become part of the action.  I have already mentioned the set which also made clever use of lighting and props, such as cut-away tables on wheels.

Reading the background about Tarrare beforehand was a bit of a double-edged sword. It made it easier to follow what was happening to him, but then I was expecting the piece to be a bit more gruesome. The extreme nature of his condition sounds absolutely horrific and I was anticipating that the use of puppets would enable a more graphic rendition of the surreal and bloodthirsty aspects.  The bodily functions and blood are cleverly portrayed but interspersed with humorous moments, some of which I don’t think were meant to be funny.  Although I was not the only person suppressing the giggles, I noticed that most of the audience were suitably subdued. I am afraid I was not convinced by the love interest and was also left wondering about the practicalities of conjoined twins sneaking behind enemy lines to carry out a rescue attempt on Tarrare. (Yes, I know it’s a puppet show but it is supposed to be based on actual people.)

There was a bit of everything. The audience were sometimes cast as freak show spectators and sometimes as supporters of the possibly sympathetic but ignorant Doctors.  Overall it was bizarre, weird and clever.  I liked it.