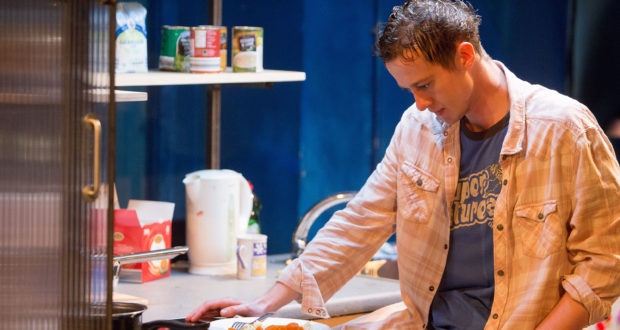 Cons: An overly domineering set that occasionally distracts from the subtlety of the script.
Wish List, Royal Court Theatre – Review

Pros: Delicately written and superbly acted, Wish List brings a difficult subject matter to life with heart-breaking reality. Cons: An overly domineering set that occasionally distracts from the subtlety of the script. Wish List is painfully relevant. The play follows Tamsin, a young lady laden with the responsibility of being the breadwinner for herself and her brother Dean, who, due to his OCD, is stuck in an endless war of paperwork, trying to get benefits and be declared unfit to work. The play is in similar territory to the hit film from last year, I, Daniel Blake, and provides&hellip;

User Rating: 4.9 ( 1 votes)
Wish List is painfully relevant. The play follows Tamsin, a young lady laden with the responsibility of being the breadwinner for herself and her brother Dean, who, due to his OCD, is stuck in an endless war of paperwork, trying to get benefits and be declared unfit to work. The play is in similar territory to the hit film from last year, I, Daniel Blake, and provides a similar dose of cold, harsh reality.

The cast provides compassionately constructed performances. Erin Doherty, as Tamsin, provides a moving performance, subtle and lovable. Doherty’s chemistry with Joseph Quinn (Dean) is so natural. The clear struggles of the siblings’ past as well as their current issues are evident in every desperate glance. The characters have been left in an unimaginable situation whereby they must survive on their own with no help from the state or their parents. The challenges of playing a character with such a complex disorder must be endless, however, Quinn’s portrayal of OCD is consistent and excruciatingly awkward. In every movement, Quinn communicates the tragedy of being a teenager, housebound by mental health issues, in a situation that neither he or his sister are equipped to resolve. Katherine Soper’s script facilitates realistic acting which helps make the play so moving.

Wish List is surprisingly gripping for a play that follows the motions of the everyday. The ridiculousness of our ‘red-tape’ society, placed alongside the small goals the characters set for themselves to get through the day, is unbearably truthful. Dean’s goals are to answer the phone, to make soup, to fill out a form. This, contrasted with the petty surveillance his sister is under to meet her targets at the factory, cleverly highlights how our society is moving towards one that would rather tick boxes than acknowledge the intricate differences between people and their situations.

The set is impressive but unnecessarily dramatic.  The factory dominates over half of the stage, doubling up as part of Tamsin’s house and the theatrics of such an industrial layout occasionally distract from the delicacy of the subject matter. The script alone is powerful enough to bring home the point that society’s systems don’t work for many people; having industrial objects loom over the characters feels like the point is being slightly over-made. One of the most poignant scenes in the play develops the romantic relationship of Tamsin and her co-worker Luke (Shaquille Ali- Yebuah), and here the simplicity of a blank stage allows the actors to run with the fragility of the script, creating a scene more heart-wrenching than even the best rom-coms.

Overall, the play is a worthy representation of some the injustices present in our country. The small cast and sublime writing allow the audience to be introduced to the frustration caused by our benefits system. Wish List gives life to a situation that is extremely common, yet is hidden in plain sight.