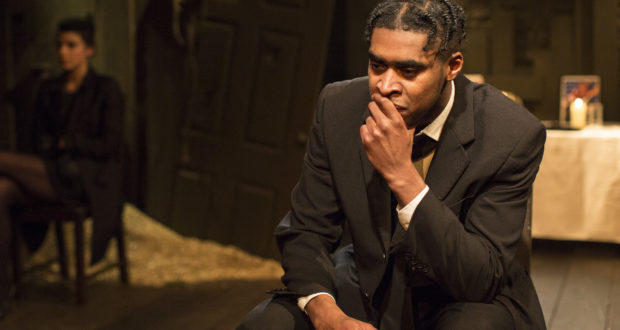 Pros: Some fine performances that keep you completely absorbed in the weighty subject matter.

Pros: Some fine performances that keep you completely absorbed in the weighty subject matter. Cons: A few questionable American accents, and three separate stories that are never fully integrated. There is a sense of formality as you enter the small theatre space at Tristan Bates Theatre. With the stage set on ground level, and the entrance facing directly onto the stage area, the two Honour Guards standing to attention either side do tend to grab you. In fact it is the two honour guards, played by Aruna Jalloh and Lolande Rufai, who give this play real gravity. Although maybe not&hellip;

A play that never quite fulfils its promise, but does have enough depth and humour to make it an interesting two hours.

There is a sense of formality as you enter the small theatre space at Tristan Bates Theatre. With the stage set on ground level, and the entrance facing directly onto the stage area, the two Honour Guards standing to attention either side do tend to grab you. In fact it is the two honour guards, played by Aruna Jalloh and Lolande Rufai, who give this play real gravity. Although maybe not quite enough to take this play that one big step from something interesting to something essential.

Glockenspiel follows three grieving American families struggling with the death of a loved one; the common denominator being that the deceased were all military personnel however none died in combat. This fact tries hard to be central to this play – that each fought for their country but died in other less honourable circumstances, rendering their passing even more difficult for the families to accept.

It made for interesting subject matter, and producers shone a bigger light on the issue by distributing pamphlets pre-curtain which provided statistics on the American military; depression rates, suicide rates, unemployment rates. Here though is the problem I found with Glockenspiel. The topic fascinated but the play failed to quite live up to the enormity of the circumstance, although not for want of trying.

It doesn’t help that the three families never fully integrated over the course of the play’s development, as I’d hoped. Yes there were links, but these were too minor, almost too forced attempts to try to connect the three narratives. Instead it felt like watching three separate stories, each of which might have fared better being treated on its own as a fully fleshed out piece of theatre.

That aside there are plenty of positive reasons that make this play worth the watch. For one, there are some fine performances. The two Honour Guards for starters, and secondly Hebe Renard and Katie Glaister shone as young widows: the former the much younger wife of a retired military man coping with the anger of her step-daughter, the latter giving a fine portrayal of “Southern state trailer trash”.

Watching the families discuss their loss, trying to understand why their loved ones died, really hit the mark. They and we were taken to a place of questioning. Were the lives of the deceased wasted? Were they let down by the military, or lost due to a questionable war? We watched the widowed wife try desperately to understand why someone would pay for her husband’s coffin, simply because he “served” his country; we saw the daughter attempt to comprehend why her father would retire from service, when it was his duty and his honour to do so. It was in these emotional interrogations that the play located a depth that I wanted to see explored further.

At almost two hours this play had time to grow and develop but too much time felt wasted with clever exchanges between characters when maybe more time should have been granted to explore the stories that were left unfulfilled. In the end this play gave me enough to be able to say I enjoyed it, but not in the way I had hoped. It lacked cohesion, each story too isolated within itself so that come the end it was hard to fully connect the strands.