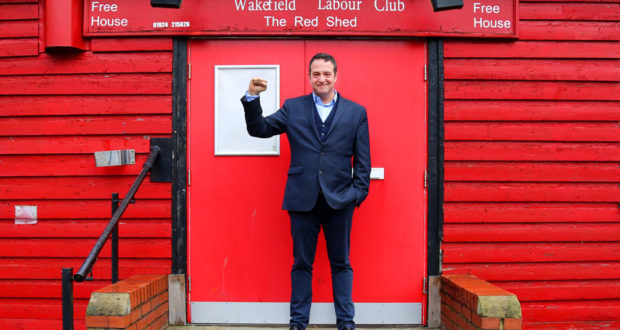 Pros: A cleverly-constructed story that is humorous and moving in equal measures.

Cons: The language and politics could be off-putting for some.
The Red Shed, The Arts Depot – Review

&nbsp; Pros: A cleverly-constructed story that is humorous and moving in equal measures. Cons: The language and politics could be off-putting for some. Whatever else he may be, on-stage Mark Thomas is a story teller. Not just any story teller but a master of the art. His delivery, passion and ability to draw you into his world are incredible. And what is more incredible is that his stories are true. Well, all except a couple of white lies he tells early on, just to demonstrate how true the rest is. Mark Thomas provides a slightly different experience to a&hellip;

Mark Thomas' story telling is masterful, creating a vivid picture in the mind of the audience that will last long afterwards.

Whatever else he may be, on-stage Mark Thomas is a story teller. Not just any story teller but a master of the art. His delivery, passion and ability to draw you into his world are incredible. And what is more incredible is that his stories are true. Well, all except a couple of white lies he tells early on, just to demonstrate how true the rest is.

Mark Thomas provides a slightly different experience to a normal night at the theatre. This isn’t quite a play but it’s also not a stand up show.  What you get is something slightly in-between, something that is quite unique; a one-man show that is one part play, one part political campaigning, one part stand-up and as a whole, completely unmissable.

The Red Shed may be billed as the third part of his trilogy but don’t let that put you off. This is a stand-alone show that has  the loosest of connections with the previous two shows; that of people and community. So what is The Red Shed? As Thomas explained in a recent interview for this site, it is the social club where it all began for him in so many ways. In his show, he takes us back there to revisit his memories, or at least tries to decide if they are real or a figment of his imagination. But like so much of his previous works, the central theme is very much the storyteller’s trick to bind his various stories together. The Red Shed is the focal point and the reason for the show – written to celebrate the club’s 50th anniversary – but it is not about that. Over the course of 90 minutes, (if you exclude the 20 minutes of stand up at the start, consider it a free extra), the audience is taken on a trip around Yorkshire, reflecting on the past and showing how this past, in this case the miners’ strike, has shaped the present. And as he does so, he tells stories of his journey and of the characters he meets along the way.

As ever, Thomas uses different tools to support his story. In this show,  it’s six audience members he has persuaded to sit on stage and play the roles of those he is talking about. It allows for some gentle laughs as he teases one about her pretend driving. “Just hold the wheel. Drive straight, the roads in Yorkshire are long, it’s from when the Romans were here” he tells her, his ad lib evidence of this comedy background. There are moments of absolute beauty in his story telling. An unprompted round of applause greets the moment he tells of his meeting with the school teacher who is part of his search and so at the heart of his story. It’s a poignant moment that brings tears to the eyes. And then the tension and emotion built up is expertly released with typical humour.

This is the most political of Thomas’ recent shows. He discusses the miners’ strike and how the north of England has been destroyed. His passion for people and his anger at how he perceives people have been let down are clear to see. It’s this passion that drives the show.  And whilst he makes no disguise of his politics and social leanings, this really shouldn’t be a reason not to give this show a chance. You may not always agree with aspects of his politics, but you cannot fault his story telling.

To suggest seeing Mark Thomas’ The Red Shed only if you are left leaning would be like saying you shouldn’t watch Billy Elliott if you disagreed with the miner’s strike around which both are based. The politics are there, but the story is much much more, and makes for an experience that will remain in your mind for a long time afterwards.