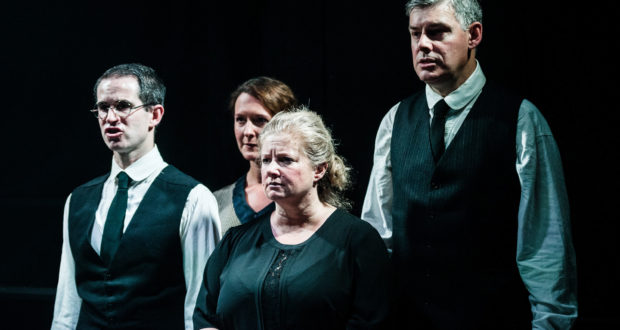 Adding Machine at the Finborough Theatre

Audiences at the Finborough Theatre are currently being treated to a new kind of musical theatre piece with Adding Machine, an Off-Broadway musical currently making its UK debut. The off-kilter show centres on Mr Zero, a man who gets made redundant after 25 years on the job when it becomes clear that a machine can replace him – and the surreal events that ensue. Joining the cast as Mr Zero’s coworker Mr One is James Dinsmore, whose past work includes Corbyn the Musical at Waterloo East Theatre and Little Shop of Horrors at Glasgow’s Webster Theatre. We spoke with James to learn more about Adding Machine, performing at the Finborough, and the power of musical theatre.

What first attracted you to Adding Machine?
On the Friday of the August Bank Holiday weekend, I was in Scotland coming to the end of a holiday when I got a call from the director, Josh Seymour, asking if I was busy at the moment – an actor had dropped out of his latest project, Adding Machine, at the last moment, and he wondered if I would be able to join the cast and start rehearsals the following Tuesday. After reading the script and listening to some of the recording that Josh sent me, and discussing matters with my agent, I said yes on the Saturday morning and cut my holiday short.

I was asked to play three ‘authority’ characters that Mr Zero encounters on his journey, and also Mr One, who works alongside Mr Zero in the Department Store’s adding office. In the original Off-Broadway production, these parts were played by two different actors, but I relished the challenge of having a limited time offstage, getting stuck into the acting scenes of the authority figures and having a good sing as Mr One. Playing the authority figures has been great, in that they are different people (or are they?!?) and I get to have three super scenes with our leading man, Joseph Alessi as Mr Zero. A real treat.

I worked with Josh three years ago on the UK debut of another rare musical, Darling of the Day, which hadn’t managed the trip across from Broadway, despite a score by Jule Styne and EY Harburg. He is a super director – very thoughtful and full of great ideas to bat around.  So, in addition to the piece itself, one of the hooks was the chance to work with Josh again.

Finally, it is always wonderful to be part of a new project, and this will be the third time for me this year, after Corbyn The Musical and a new version of Tess of the D’Urbervilles.

What should audiences expect from this show, and what do you hope they take away?
That’s a tricky one. 42nd Street this ain’t! The Finborough Theatre is known for its new writing, and in a way, I think folks should come expecting something different. Elmer Rice’s play that this musical is based on was groundbreaking when it was first performed in 1923, and in a way, I think that audiences should be ready for some groundbreaking work here – both in terms of the story and the music, which bounces around from the very contemporary (almost operatic at times) to some gospel and Gershwin-esque tunes.

I hope that people will come with open minds, see some of the dangers that life throws at us, how choices matter in our short lives, and what a wonderful team Josh has assembled for this piece.

What are the advantages of performing in the Finborough’s intimate space?
As I say, the Finborough is known for its new writing, so there is a loyal audience who come to support the work it puts on. At times this musical is shocking, so it is super to be able to see the faces of the audience and their reactions to some of the things that we are saying/singing. For a piece that explores the intimate details of Mr Zero’s life and his journey, it is a wonderful space to have a sense of examination and no escape, both for us as a cast and for the audience!

Has there been anything that’s surprised you now that performances have started and the piece is in front of an audience?
In our rehearsal room, we generally are watching what’s happening ‘on stage’ while we’re not being used, so we have a sense of the various characters’ journeys. But once the show is up and running, if you’re offstage in the Finborough there are no wings with a view of the stage, so you don’t get the chance to see what’s happening. It’s great to come on for a scene and not be sure what you are coming into, if that makes sense. It makes your journey to engage with whatever character you are to meet onstage more real.

Another one would be that the great thing about live theatre is that there are no distractions for an audience (with the exception of the one lady with her mobile phone), and we can see how they react in this space.  After a rather blasting start, where they sit transfixed by the verbal bashing Mr Zero is getting from his wife, they relax as the piece twists and turns, enjoying the chance to laugh and then gasp. The audience response has been lovely and that always helps!

Adding Machine centres on a man who’s been made redundant, which feels like a relevant topic in today’s technology-based society – and before this, you were in the very of-the-moment Corbyn the Musical. How do you think musical theatre helps to tackle these current topics?
Good question! I am a bit of a political animal in that I enjoy following politics, so Corbyn was fascinating from that point of view.  It was true satire and I got to play a wheelchair-bound Tony Blair (a botched assassination attempt) who sings about being a Warmonger. It was set in 2020, by which time Jeremy is Prime Minister (more of a possibility now than it looked in March) facing various crises, not the least of which is a possible attack by his old friend Vladimir Putin and having Donald Trump as President of the USA. The show was being written in early months of this year and we performed it in March and April.  Then came the EU Referendum vote.  Let’s just say, if it was being revived now, some of the plot lines would have to be altered!

Adding Machine is no less relevant today than the play was back in 1920s America.  What does a man do when his skill set is lacking by the time he is 50 and technology can do the job he did for 25 years?  Is it all down to the choices that we make as individuals, or do our political leaders and society have to look out for us?

I think that any form of new theatre writing has to be relevant to the audience that is seeing it for the first time. It may challenge them or deal with issues of the day (such as Enron), but it is also allowed to entertain them and allow an audience to escape from the realities of life.  There must always be a place for lighter musicals alongside more challenging work, but even in even the most jolly of shows, such as 42nd Street or Half a Sixpence, there are real issues that the characters must deal with.

But we need to have spaces that can present the new works of current writers and find that audience who will keep musical theatre flourishing. Whereas New York positively encourages new musical theatre writing and has an audience that supports it Off-Broadway, we have to make better strides to do that here.

Finally, what’s next for you? Are there any dream roles you’re hoping to take on?
I am going to be playing Abanazar in Aladdin at the Capitol Theatre in Horsham for the festive season.  I was there three years ago playing Captain Hook and they have very kindly asked me back, so I am looking forward to that.  Everyone loves a baddie!

I would love to play Henry Higgins in either Pygmalion or My Fair Lady before I get much older and to be in a Ben Travers farce!

But it is just such a joy and privilege to be able to do what I love and not face the drudgery of 25 years in the same office adding figures like Mr Zero! Constant challenges and not knowing where the acting road will take me next keeps me on my toes.

Adding Machine is currently playing at the Finborough Theatre through 22 October. 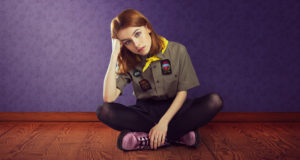