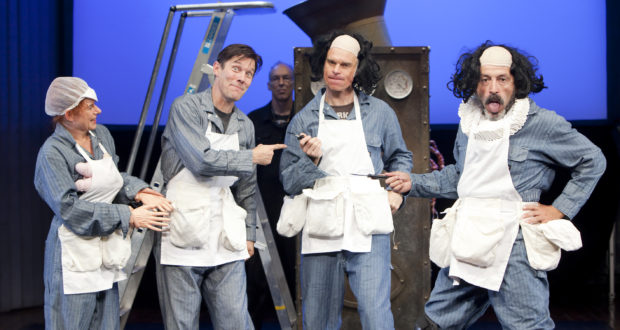 Pros: A hugely entertaining catalogue of Shakespeare's deaths, performed with great wit and expertise. Cons: It's hardly thought-provoking. There are 75 on-stage deaths in Shakespeare's plays and it's Spymonkey's mission to perform all of them, leaping from play to play and from character to character at top speed. At the side of the stage, a woman sits knitting; in front of her, next to two big buttons, is a large LED counter displaying the number of future victims remaining. The counter drops by one with each casualty. Meanwhile, a second display above the stage reveals the name of the&hellip;

A hilarious display of morbid clowning.

There are 75 on-stage deaths in Shakespeare’s plays and it’s Spymonkey‘s mission to perform all of them, leaping from play to play and from character to character at top speed. At the side of the stage, a woman sits knitting; in front of her, next to two big buttons, is a large LED counter displaying the number of future victims remaining. The counter drops by one with each casualty. Meanwhile, a second display above the stage reveals the name of the play and the character whose expiration is being enacted.

Spymonkey is a team of four talented comedic actors who race through Shakespeare’s canon with agility, energy and superb comic timing. Despite playing a wide range of characters, they each have their own distinct personality: Toby Park is the supposed creator of the work, prickly, defensive and controlling; Petra Massey is the sole woman, determined to enact the death of Ophelia, despite Toby’s protestation that it was off-stage; Stephan Kreiss is a tall grey-haired German, who’s secretly in love with Petra; and Aitor Basauri is the Spanish tragedian who considers himself a serious Shakespearean actor. As the evening progresses, we learn as much about their own motivations as about the characters whose final moments are enacted.

The deaths are performed with huge energy, variety and an overriding sense of fun. Stephan, Toby and Aitor are dressed as giant asps for the tragic ending of Cleopatra; Toby’s Titus Andronicus portrays the baking of a pie containing her own children for the Queen of the Goths (not one of Shakespeare’s lighter moments) by feeding Stephan and Aitor through a giant mincing machine.

Actually, there are 76 deaths in Shakespeare – the last being a fly who also meets his sticky end in Titus Andronicus. This fly makes regular appearances throughout the show, mounted on a piece of wire in front of a handheld camera and irritating all the cast, with the camera’s view projected onto a giant screen at the back of the stage. The fly’s own eventual demise, it turns out, is the most moving of the evening.

Featuring song, dance, clowning, slapstick and occasional forays into tragedy, this is a frantic show that rushes through the catalogue of fatalities at breakneck speed. The audience barely stops laughing for the whole two hours, as death after death is performed with wit and perfect timing.

You’ll need at least a passing acquaintance with Shakespeare’s greatest hits to get the most from this show, but if you’ve seen a couple of them you’ll be fully entertained by this evening of unrestrained hilarity.