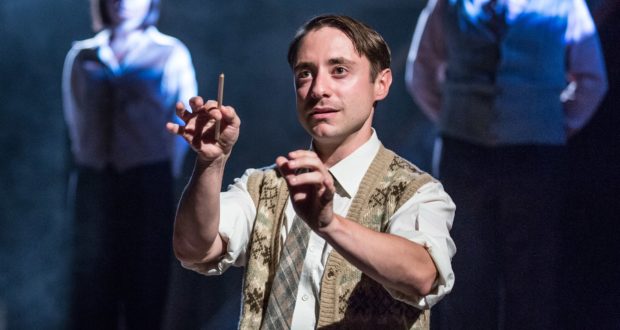 Pros: Great venue and ambiance, committed ensemble playing intriguing characters. Cons: More of a commentary. Plot lacked substance and action. Having only heard great things but never been, I was quite excited to attend a show at Wilton’s Music Hall; and boy, it did not disappoint. This venue is a Grade-II listed music hall situated in the heart of East London. The building itself tells a story, with several pieces of history hidden around every corner and a tucked-away cocktail bar. Touted as London’s ‘hidden stage,’  it was the perfect venue to premiere Zoe Lewis’ new play Britten in Brooklyn. The&hellip;

An insightful period drama, based on true events, that comments on life rather than shows it.

Having only heard great things but never been, I was quite excited to attend a show at Wilton’s Music Hall; and boy, it did not disappoint. This venue is a Grade-II listed music hall situated in the heart of East London. The building itself tells a story, with several pieces of history hidden around every corner and a tucked-away cocktail bar. Touted as London’s ‘hidden stage,’  it was the perfect venue to premiere Zoe Lewis’ new play Britten in Brooklyn.

The story of Britten in Brooklyn follows legendary composer Benjamin Britten around the time of World War II. Having been disgraced and exiled to America for his beliefs, he moves into a Brownstone in Brooklyn, NY with the likes of fellow Bohemian artists poet W.H. Auden, author Carson McCullers, and famous striptease star, Gypsy Rose Lee. The group spend their days loving, drinking, partying, playing games, trying to avoid politics, and searching for creative bliss. All the while, they try to avoid the war looming over their heads, while their sense of duty to their country and fellow man creeps in.

I had high hopes for this show, with its historical significance, incredible ambiance and extraordinary cast. I was certainly entertained for the two hours of the show (including interval) but left without any particular feeling afterwards. While Lewis’ set-up is great, the show gave no real insight into who the characters were, other than struggling artists, besides the title character Britten. It was more a commentary on the artists’ world and their struggle during a trying time in history, yet didn’t show as much as one would have liked. The relationship between Britten and Auden was well told, although it left some details of their story out.

Oli Rose’s direction is playful and uses the multi-tiered set well. The play is set in a 1940’s house in Brooklyn Heights, filled with bits of Bohemia. It is beautifully laid out, due not only to Rose’s vision but also that of designer Cecilia Carey. Peter Harrison’s lighting design captures the essence of the space and also highlights specific moments of Britten’s story. Dom James’ music and sound effects truly give you a sense of place: you can feel the reverberations of a ship’s engine in your seat all the way in the fifth row.

The all-star cast works well as an ensemble, but individually has some faults. John Hollingworth’s portrayal of W.H. Auden is well-crafted, but mostly shows the party-animal side of the man. Sadie Frost makes an thoughtful attempt at the seductive, yet yearning-for-more side of Gypsy Rose Lee. Her accent works, but overall I was not convinced. Conversely, Ruby Bentall’s portrayal of Carson McCullers is spot on in every way but the accent. I believed in her struggle for her art and for love, and her clever comments, quickly and wittily delivered, bring humour to the second act. Ryan Sampson’s Benjamin Britten is the most intriguing and convincing of all in the title role, tenaciously painting the picture of Britten’s struggles with his music, his family, love and his duty to his country. Although I wanted to believe in the relationship between Gypsy and Carson, I found the friendship between Auden and Britten much more persuasive and interesting to engage with. It is a tall order to play such infamous artists, but besides a few bumps, this is done with valiant effort.

Set in the perfect venue to tell its story, Britten in Brooklyn offers a dramatic look into the lives of these artists during a pivotal point in history and in their lives. It was a worthwhile to view, even if just to see how well it compliments the venue. Ultimately, however,  I was entertained but not amazed.

Previous: The Wawel Dragon, The Scoop – Review
Next: Interview: Bringing ‘Vanities’ to the UK