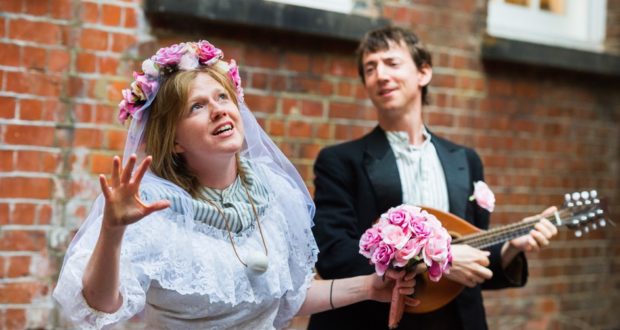 Pros: The fast-paced action effortlessly spreads across the auditorium, engaging even with the audience up in the balcony.

Cons: Some scenes in the first part felt a bit loose, when compared to the smooth delivery of the second half.
Extravaganza Macabre, Battersea Arts Centre – Review

Pros: The fast-paced action effortlessly spreads across the auditorium, engaging even with the audience up in the balcony. Cons: Some scenes in the first part felt a bit loose, when compared to the smooth delivery of the second half. Following the disastrous fire that affected the Grand Hall in March 2015, Battersea Arts Centre accepted immediately the challenge of reinventing its performance space. As a result, July 2016 marks the inauguration of the new open-air Courtyard Theatre, created by Stirling Prize winning architects Haworth Tompkins. In the narrow space circumscribed by the original red brick walls, we can distinguish&hellip;

A slapstick tale of love and hate in Victorian London, which has great performative potential.

User Rating: Be the first one !
Following the disastrous fire that affected the Grand Hall in March 2015, Battersea Arts Centre accepted immediately the challenge of reinventing its performance space. As a result, July 2016 marks the inauguration of the new open-air Courtyard Theatre, created by Stirling Prize winning architects Haworth Tompkins. In the narrow space circumscribed by the original red brick walls, we can distinguish easily the upward extension of white brickwork and red metal framing, inspired by the infrastructure of the Teatro Oficina in São Paulo.

The honour of performing the first ever show in the new venue has been entrusted to Little Bulb Theatre, an award-winning national touring company committed to exploring the smallest details of human nature through physical acting and ‘home-made’ music. With this particular space in mind, Clare Beresford, Dominic Conway and Alex Scott have produced a lively comedy in the best tradition of the Greek and Latin farce. The audience is invited to sit on wooden benches on the ground floor or stand on the first floor balcony or the above terrace. Against the façade there is a platform with a piano and two timpani, but the action often spreads intentionally across the different levels, making great use of the windows on the back wall and the trapdoors to the basement.

Opening with a brass march, the trio invites the public to join in with a sing-a-long about the peculiarity of London, which – as the refrain suggests – can be called at once heaven, hell or home. Soon after, the gang introduces the adverse love story between Elizabeth (Clare Beresford) and Earnest (Dominic Conway). Hindered by an epic storm and threatened by the demonic Lord London (Alex Scott), the betrothed couple eventually finds happiness thanks to the invaluable intervention of Urchin (also played by Clare Beresford) and his pet Dog-dog.

The plot is simple and, according to the customs of the commedia dell’arte, every actor covers at least three different roles, with interchangeable genders. For this reason, the costumes are quite basic – yet appropriate for the Victorian period – and frequently switched at an impressive speed. The characters are stereotypical and they all represent human archetypes to praise or despise. The naïve maiden Elizabeth is supported by the clumsy nurse Bertha (also played by Dominic Conway), the brave young man Earnest fights against the villain Lord London with the help of little Urchin, whereas the Friar (also played by Alex Scott) never has a clue of what’s going on.

The cast also share credits for devising the whole performance and composing the music, which is always played and sung live on stage. The three actors impressively alternate behind the piano, on the euphonium or at the timpani.

Due to the natural light of the open space, the artificial lighting isn’t particularly relevant in the first act, but gradually gains importance towards the end, when the sky is finally dark and a string of coloured light bulbs contributes to the grand finale celebrations.

Most significant for the success of Extravaganza Macabre is the unconditional suspension of disbelief expected from the public, who seem to appreciate greatly the continuous breach of the forth wall. Often and suddenly, members of the public are summoned to take small roles in the action, with exhilarating comic results and, for this reason, I found myself accomplice of a dog-murderer.

If you’ve enjoyed slapstick West End hits like The Play That Goes Wrong or The Comedy About a Bank Robbery, don’t miss this site-specific formidable piece of theatre which, after some polishing, will certainly develop into an authentic farcical extravaganza, more brilliant than macabre.