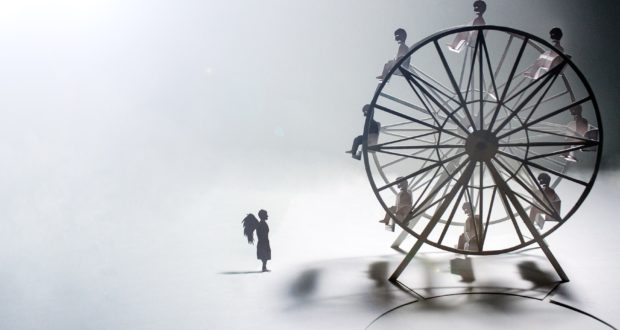 August Strindberg’s 1901 work A Dream Play is not one of the easier plays in the canon to put on stage. Telling the story of a goddess who comes down to Earth to discover why humanity is so discontent, the Expressionist drama borrows its own structure from the shape of a dream, complete with shifting characters and extravagant stage directions. 115 years after its debut, BAZ Productions will now take on Strindberg’s work in dreamplay, a new promenade theatre adaptation at the Vaults. In this guest blog, director Sarah Bedi discusses the thought processes behind adapting this challenging work – and the process of dreaming itself – for the stage.

‘The child of my greatest pain’: August Strindberg’s own words on one of his most admired plays, A Dream Play.

I can’t pretend to fully understand Strindberg’s personal experience, but as I immerse myself ever deeper in the world of our dreamplay – a response to Strindberg’s, but by no means a faithful adaptation – I find myself tiptoeing into the disturbing world of the subconscious. And often, because making theatre is a very personal act, my sub-conscious. I’ve found we all stash some pretty remarkable, powerful and endlessly fascinating ‘stuff’ down there. Which all comes out to play in our dreams.

Before this project, I was one of those people who didn’t think they considered dreams very often — I’d rarely remember them, and the few I did hold onto as I drifted into wakefulness mainly involved peaceful journeys flying above London. That’s apart from the rare nightmare that would rip the night in two without warning. Because of these nightmares, I slept with both the light and television on until I was 30. Unbelievable really that I didn’t ever stop to consider exactly what was going on in my mind at night.

When I first read Strindberg’s A Dream Play I had an almost violent emotional reaction — and this is from someone who didn’t think they held much stock with dreaming. But then, maybe it shouldn’t have been such a surprise, because according to my research for dreamplay, we all dream a lot. Every night. Whether or not we remember. Even if we aren’t all consciously aware of our dreams, there is something about the experience of dreaming that connects us all. Strindberg drew me into his dream and I observed his distress at chasing desires always just out of reach, the fear of being rejected, and the drudgery at the repetition of life. The very human experiences that we all feel at times, and which we often stuff hurriedly into boxes marked ‘subconscious’ and send on their way before we have to examine them too directly.

I realised that if this was to be our next project for BAZ, the theatre company that is my home, that somehow we should attempt to make the audience the dreamer themselves; not simply observing someone else’s (Strindberg’s) dream, but rather existing inside their own dream.

This realisation led to months of labyrinthine research on how we all dream (not to mention why we dream) – and I was surprised to discover that we don’t all dream in the same way. That the narratives and genres (for want of a better word) differ wildly. Some people dream in images and stories that structurally almost resemble films. Others dream in an indescribable simultaneous ‘happening’ of images, feelings and sensations. Some hear words, while for others communication is telepathic. Some dream in vivid sensation, while others are drained of colour. Some are the protagonist in the story, while others are observers. On and on. For every possibility was an opposite.

I felt like banging my head against the wall. How could we possibly create a dream that every audience member would associate as their dream, when we all dream in such a unique way? And then I re-read Strindberg and realised that he had already figured this one out for us. It’s why I had such a powerful reaction reading it that first time. Because, yes, the stories and storytelling methods of dreams are unique to each of us. But the feelings underneath, the very primal feelings of desire, fear and hope? These feelings we all share. If we can plunge the audience into a dream that elicits these feelings, that offers them that experience, honestly and truly, then maybe that is all we have to do to offer them a dream experience.

A bit of reading around Jung helped to nudge the play further in this direction – there are ‘archetypes’, symbols or images we all have emotional connections to wired into our sub-conscious, and mythic story structures which again tap into this deep layer of existence.

The Vaults unlocked another part of the play for me: a physical journey underground. In dreamplay, the Vaults themselves become our sub-conscious – a sub-conscious we journey ever deeper into, space leading onto space (some claustrophobically small, while others are so large you genuinely fear getting lost). Every space offers something of its own – an experience, a feeling, a piece in the dream-puzzle.

And these thoughts led to the next. We are just below Waterloo station. What better place to represent the difficulties of life Strindberg was exploring: thousands of people teaming to get somewhere in life, waiting impatiently for their platform to be announced. The frustration of watching someone skip ahead to their train when your own has just been cancelled. The repetition of the journey of the commuter, the same day in day out, down the minute (barring delays). While we are in the Vaults, the vibrations of trains passing overhead become an ever-present reminder that waking, painful life is just behind our eyelids and seeping into our dreams.

Music too, became vital to this process of adapting this dream experience. Music that can capture experiences in a way that words can’t. Music that offers every listener their own personal interpretation. Although we quickly learnt that music is next to useless as a soundtrack in this project — it has so much more charge than that — music become characters in our dreamplay as vividly as our actors do.

And we’ve barely scratched the surface yet. There is still so much we are exploring, so much left to discover. So much unknown until our play finally meets an audience and the dream becomes activated by life.