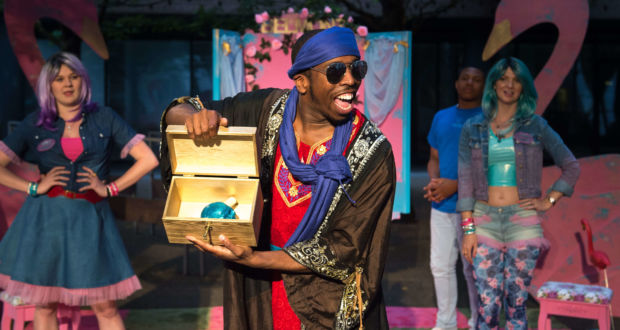 Pros: The production involves a skilled ensemble of professional and community based actors, set within actual venues in Barking.

Cons: As the production takes place outdoors, the sound of the surroundings can be distracting and overwhelming at times.
The Merchant of Venice, Studio 3 Arts – Review

Pros: The production involves a skilled ensemble of professional and community based actors, set within actual venues in Barking. Cons: As the production takes place outdoors, the sound of the surroundings can be distracting and overwhelming at times. This Thursday was a particularly nice night to be out and about in London and it was especially lucky for me, as I was in Barking, East London taking in Studio 3 Arts' production of The Merchant of Venice. The performance was an unconventional way to watch Shakespeare's comedy of love, prejudice, mercy and revenge: the production was two hours long,&hellip;

The Merchant of Venice is a thrillingly tangible production full of community spirit.

This Thursday was a particularly nice night to be out and about in London and it was especially lucky for me, as I was in Barking, East London taking in Studio 3 Arts’ production of The Merchant of Venice. The performance was an unconventional way to watch Shakespeare’s comedy of love, prejudice, mercy and revenge: the production was two hours long, told in modern verse and took place outdoors, with the audience walking through various venues in Barking’s town centre. The unconventional production certainly proved that this story, 400 years on, is still relevant to modern audiences and to communities today.

For those who are not familiar with the play, The Merchant of Venice tells the story of merchant Antonio (Michael Bertenshaw), who offers to be the guarantor for his dear friend Bassanio (Alec Parkinson) who borrows money to travel, woo and win the heart of his beloved Portia (Lucy Dixon). Bassanio borrows the money from the vengeful Jewish money lender, Shylock, who only accepts the bond on the condition that if it goes unpaid, he may extract one pound of flesh from his Christian nemesis, Antonio. Bassanio must win Portia’s hand, assist his friends and try to save Antonio. Justice must be served, love must prevail but will mercy be shown?

The production is seven years in the making, originally starting out as an idea of Studio 3 Arts’ Artistic Director Liza Vallance and later becoming a collaboration between Studio 3 Arts and the people of Barking. I have a strong passion for community arts practices myself and for me, this was everything you could want from a community theatre piece: fierce drama rooted in vibrant community spirit.

The company consists of professional actors as well as a community cast who help set the scenes through various roles and street dance performances, giving a community feel and flavour to the play. Angela Ekaette Michael’s direction seamlessly blurs the line between the professional and community casts, allowing both groups to feed from one another. The ensemble should be commended for their focus, skill and resilience in delivering high quality work in an atmosphere as alive as they were. Taking into account the sounds of planes, car sirens and passers-by, they were ready for anything!

Ashley Joseph’s modern translation offers something for Shakespeare lovers and newcomers alike. Using a verse style but a modernised text helps the production to stay true to the originality of the story while making the play more accessible to those who might otherwise shy away from Shakespeare. I’m normally not a fan of messing around with Shakespeare’s language but Joseph does an excellent job of holding on to the Bard’s meaning while making the tale relatable to audiences today. It’s obvious copious research has been done to link the story with Barking & Dagenham’s history of merchants and trade and the production exudes the community’s sense of pride and autonomy.

Setting the story in the modern day adds another layer of accessibility to the production. The movement from one outdoor space to the next makes it clear that the piece belongs to the people in the community. Although I wasn’t a huge fan of the reality TV show setting for the challenge for Portia’s suitors to win her hand, it did shed even more light on the ridiculousness of the task.

Studio 3 Arts’ production of The Merchant of Venice is a unique and exciting evening of theatre, marrying the old with the new, the antiquated with the modern and the past with today. It’s an experience filled with a feeling of community that is welcoming and inviting for audiences and entertaining for all ages.