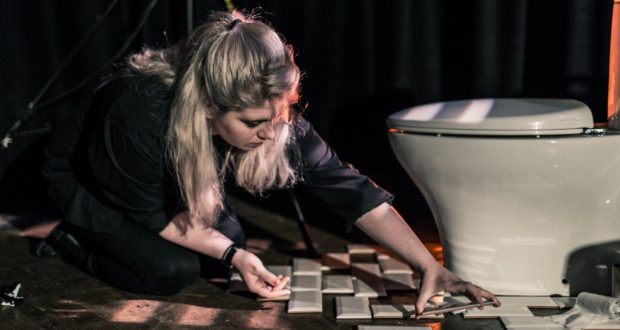 Pros: The staging and lighting allow the limited scenery to be used in such imaginative ways that the stage seems a lot bigger.

Cons: The script needs much more work; it’s messy and gives away too much, too soon.
Squirm, Theatre503 – Review

Pros: The staging and lighting allow the limited scenery to be used in such imaginative ways that the stage seems a lot bigger. Cons: The script needs much more work; it’s messy and gives away too much, too soon. One man shows are a difficult beast. They are so dependent on creating some rapport between actor and audience. After all, you are going to be watching the one person for the whole play, so you need to want to keep watching them. You don't necessarily need to like the single character in front of you, but there must be&hellip;

A definite work in progress. A solid idea, but at the moment the show doesn’t give you enough reason to care about what the central character is going through.

One man shows are a difficult beast. They are so dependent on creating some rapport between actor and audience. After all, you are going to be watching the one person for the whole play, so you need to want to keep watching them. You don’t necessarily need to like the single character in front of you, but there must be something there to hold you: sympathy, hatred, maybe even love.

For the fifty minute running time of Squirm, I tried desperately to find a reason to care in some way for Rory, the sole occupant of the stage. Or, if not care, to at least want to know what becomes of him. I just couldn’t. I wasn’t able to place what emotion we were meant to feel for him. There was so much wallowing in self pity, I couldn’t even bring myself to dislike Rory. The nearest I got to emotion was disdain.

Squirm sees Rory (Nathaniel Fairnington) explain the run-up to the previous night’s occurrences, an event that is meant to shock us to the core and leave us gasping. Unfortunately, it doesn’t quite work out, for a number of reasons.

For starters, the script needs work. There is fine line between displaying Rory’s confusion, and confusing the audience. As the sole occupant of the stage, Rory seems to flick from speaking directly to the audience to speaking to his ex-girlfriend, as if she were actually there. It felt messy, and it seemed like Fairnington wasn’t sure himself who to direct his dialogue to.

Playwright Serafina Cusack also appears torn between keeping the audience guessing about what Rory has done that’s so awful, and keeping the plot clear. The result, unfortunately, is that the outcome is fairly obvious from early on in the show. The small hints were just confirmation of what I’d already realised. I won’t give too much away in saying that Rory is dating a 15-year-old girl, but that is only the initial confession. When the finale comes along and Rory makes his second, much more shocking revelation, you are meant to be completely numbed by it. But, with this twist being so well signposted from the start, it’s not really shocking enough to achieve that effect.

I don’t want to be completely negative, though. There were some good moments that suggest that both Cusack and Fairnington are talented people with potential. At times, it was a fine performance. The lighting design by Jess Bernberg managed to change the location from bathroom to pub to longue in a way that the simple staging shouldn’t have allowed. And there were moments when the script really sung. The scene where Rory describes how he first met the girl is superb. Sitting on beer crates, he describes the pub garden, how they first spoke and how their relationship developed, painting a picture in our minds. It’s in these moments, with Fairnington describing conversations and meetings, that the play comes to life. These single scenes were perfect. Unfortunately there just weren’t enough of them to make up for the lack of depth elsewhere.

The idea behind Squirm is solid, and as a work in progress it definitely has legs. I could imagine this being expanded to a cast of two, maybe three, and it growing from there. As the show stands right now, however, it left me disinterested.