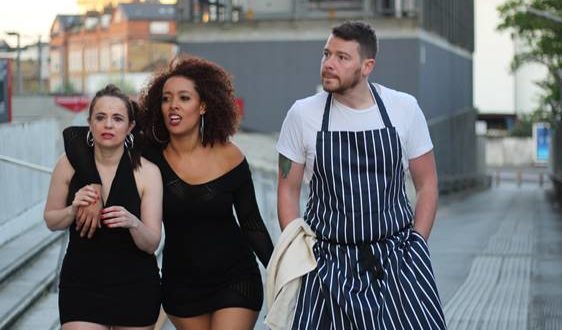 Pros: The performances of Samantha Robinson and Eloise Joseph alone make this a play worth seeing; their double act is as captivating as any I’ve seen for some time.

Cons: The second half felt rushed and under developed in comparison to the first, slightly disappointing after such initial depth.
Screwed, Theatre503 – Review

Pros: The performances of Samantha Robinson and Eloise Joseph alone make this a play worth seeing; their double act is as captivating as any I've seen for some time. Cons: The second half felt rushed and under developed in comparison to the first, slightly disappointing after such initial depth. Theatre503 is now one of those not to be missed venues for me. It's very easy to see why the Guardian described it as "arguably the most important theatre in Britain today" as in its small intimate space it manages to put on play after play that is modern, relevant&hellip;

A thought-provoking play that lives up to the reputation of this amazing theatre, and one that makes it impossible not to care for what happens to the two lead characters.

Theatre503 is now one of those not to be missed venues for me. It’s very easy to see why the Guardian described it as “arguably the most important theatre in Britain today” as in its small intimate space it manages to put on play after play that is modern, relevant and thought-provoking for today’s society. I believe it’s everything good theatre should be, and offers an alternative for those seeking something gritty and different.

Of course, being modern and relevant isn’t what everyone wants or enjoys. And Screwed is certainly not for all. Because with Screwed, modern means a blunt and direct script that makes liberal use of colourful language, whilst relevant translates into a study of female hedonism: living for today without any thought for tomorrow, done because of a need for instant self-gratification. It is a full-on play and no doubt won’t be everyone’s cup of tea.

Screwed sees Charlene and Luce work all day simply so they can go out all night, drinking, dancing, and seeing how many guys they can get.  The pair, played by Samantha Robinson and Eloise Joseph, make an incredible double act. The synchronicity of their performance is perfectly pitched, and they play off of one another with intimate ease. In their attitude is the sense that they are “it”, that their lives are what they want and what surely everyone else should aspire to. Except that it’s a life that is repetitive: work, drink, party, men, hangover, day after day.

And while they carry on, slowly descending into the disaster that is on its way, those around them develop and grow.  This development of others was superbly displayed by the only other two cast members. Luce’s father, Doris, spoke of how he had finally found his place in life as he goes through the transition from male to female, whilst Paulo, friend and co-worker, talked about his life plan, wanting his own business and retirement at forty.

Of course Screwed isn’t perfect. But it wouldn’t be fair to expect perfection in such a small theatre with its limited budget and its primary aim of putting on new progressive plays. There were issues, but not so many that it should put you off trying this out.

Though 90 minutes without interval, this felt like a play of two halves. The first was full of laughter and, whilst manic as the girls displayed their hedonism, took its time to really develop characters. The second half saw the laughter cease almost completely as things took a dark turn. But it felt slightly unbalanced. Given the second half presented an integral part of the story it wasn’t given enough time to fully develop, and felt more rushed than necessary. In fact the most disappointing scene was perhaps the most important part of the narrative. As Charlene and Luce ended a night at Paulo’s kebab van, it was clear this was the turning point in the plot; yet for me it felt under-developed and a little confusing. Personally I’d rather see cuts in the first half to allow more time to delve into the consequences of their actions that are the focus of the second.

In the end though, Screwed, as with everything I’ve been fortunate enough to see at Theatre503, is theatre for an audience looking for something that is thought-provoking and demanding.  And it is theatre that should appeal to a younger audience with its modern subject matter and a production that is accessible. That is provided you aren’t offended by its language and descriptive script that doesn’t hold back in any way whatsoever.