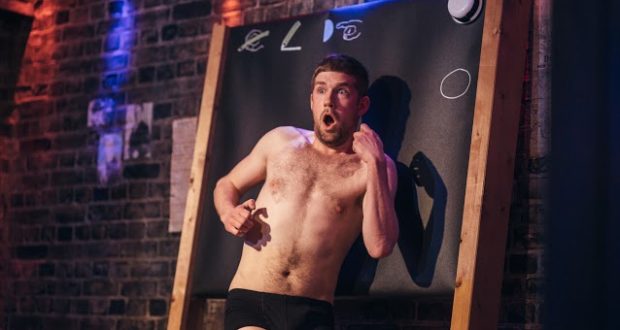 Pros: A funny, touching and hugely entertaining play without words.

Pros: A funny, touching and hugely entertaining play without words. Cons: None. Drawn In is the latest production from Speechless, a theatre company that – as its name implies – specialises in plays without words. But if you're thinking cute but tiresome mime, you're wrong. Drawn In is a laugh-out-loud, ingeniously conceived work of genuine theatrical resonance. One side of the stage is a plywood door; on the other, a vast floor-to-ceiling blackboard. As the lights go up we see Man face down on the floor. Literally so: his nose is pressed into the ground, arms by his side,&hellip;

A hilarious one-man mime transforms seamlessly into a poignant two-hander about creation, power and dominance in this thought-provoking, ingenious production.

Drawn In is the latest production from Speechless, a theatre company that – as its name implies – specialises in plays without words. But if you’re thinking cute but tiresome mime, you’re wrong. Drawn In is a laugh-out-loud, ingeniously conceived work of genuine theatrical resonance.

One side of the stage is a plywood door; on the other, a vast floor-to-ceiling blackboard. As the lights go up we see Man face down on the floor. Literally so: his nose is pressed into the ground, arms by his side, like a discarded mannequin. Dressed only in a pair of black underpants, Man starts to twitch, then to shudder, and finally to climb uncertainly to his feet as if unused to wielding his limbs.

Man (entertainingly played by James Callàs Ball) follows a buzzing fly around the room, chasing it until it escapes through the keyhole. We don’t see it, of course, but we hear it. Idly scratching, he discovers a blackboard marker concealed in his underpants. As he experiments with it, he inadvertently draws a line on the board before noticing the instructions: a panel shows a hand drawing with the marker, and a finger pressing a button. On the far side of the board is the huge red squidgy button itself. He presses it, a klaxon sounds, and a length of string appears on the floor.

Man is delighted. He picks it up, plays with it, dances with it, and ultimately chews it into his mouth before spitting it into his pants. And so the experimentation begins: each time he draws something on the board and presses the button, a physical object that vaguely (but rarely precisely) resembles it appears on the floor: he attempts to draw the button, but is given a red button-sized ball.

When Man correctly draws a row of buttons on the board, he finds that pressing one of them brings up the house lights so that he can see the audience. Suddenly he’s aware of his nakedness, and ashamed of it. He draws a pair of tiny trouser legs, and is rewarded with a pair of chopsticks. He draws full-sized trousers, and they appear before him; he incorrectly draws a T-shirt, and is rewarded with a top hat of the same size and shape.

When he adds feet, hands and a head to the drawing, pressing the button produces Woman (charmingly played by Hephzibah Roe). And so begins the second half of the play, in which Man’s dominance and experience is challenged by Woman’s innately better understanding of the nature of the world.

And this is where the mood changes. So far, the show has been light and funny, with a few poignant moments. But in his attempts to control and manipulate Woman we see a darker side of Man, as his efforts are resisted and ultimately overcome.

This is the Adam and Eve story retold, but with the resonance of every other creation myth. Frankenstein, Barbarella and Metropolis are all echoed here, as we see the rite-of-passage story of a newly-made creature gradually coming to terms with his abilities and his environment, which gradually evolves into the tale of a creator’s attempt to control his creation.

Drawn In is a hilarious show, a broad comedy of trial and error that becomes ever more poignant and resonant as it continues. It’s only playing for two nights as part of the King’s Head Theatre’s Festival 46 of new writing, before hopefully travelling to the Edinburgh Festival next year, so catch it if you can. With immaculate sound design by Andrew Reynolds and neatly timed lighting effects by Lorna Heap, it’s a play that entertains as much as it provokes deeper consideration. Drawn In achieves everything it sets out to do – and that’s what makes it a five star production.