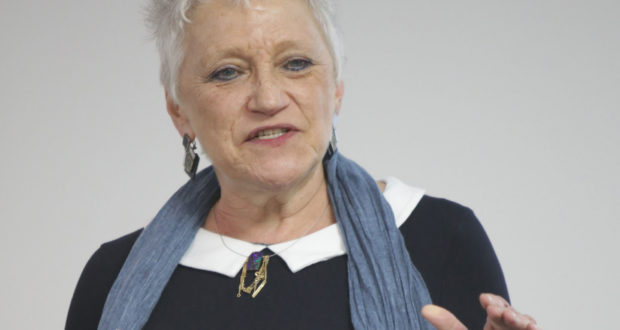 Jennie Buckman’s varied career is enough to make any theatre person envious. She’s worked in some of the UK’s top institutions, from the National Theatre to the BBC; founded Giants Theatre Company; and trained some of the country’s top actors in her role as Head of Acting at RADA. Now, theatre lovers can see Buckman’s writing at The Hope Theatre with Piece of Silk. The play, which is produced by Giants Theatre Company and directed by Tania Azevedo, takes inspiration from The Arabian Nights and draws on the stories of female survivors of domestic violence. We spoke with Buckman to learn more about Piece of Silk, the importance of live performance, and her advice for those hoping to follow in her footsteps.

What inspired you to write Piece of Silk?
I wanted to write a play which dealt with domestic violence, enforced marriage, misogyny, racism and othering!–honouring the stories of women survivors. I re-read The Arabian Nights and found it magical, but so riddled with misogyny–it suited our purposes whilst also providing us with fiction’s greatest heroin, Shaharazad. The concept of ‘storytelling is a matter of life and death’ immediately came to mind.

How would you describe the piece to someone thinking of coming to see it?
I would describe this piece as exciting, challenging and dark–but with very funny moments. There is a running story throughout told on Vimeo using projected images. The narrator speaks in spoken-word, and it’s also a family saga.

Given your extensive experience with training actors, how does it feel to see actors bringing your own words to life? Does it affect how you view their performances at all?
Funnily enough, when I go to the theatre (even when I’ve trained some of the people on stage) I never actually go to look at ‘the acting.’ So to have these wonderful actors bring my text to life is very gratifying and humbling. They are a very fine cast.

What message do you hope audiences will come away with?
I hope that assumptions will be questioned; I hope that the play brings out the importance of being true to yourself–and that we should always allow people the freedom to be who they are.

Piece of Silk focuses on domestic violence and the impact that the clash of cultures (East meets West) can have on families. How important do you think the theatre is in raising attention to these issues?
I think theatre is one of the best mediums to raise awareness of issues. There is something about a room full of people sharing a live performance which is totally unique in its immediacy and impact–it is unlike cinema or TV.

You’ve had a long and varied career that has involved working at some of the UK’s most recognisable institutions, along with forming your own theatre company. What do you personally consider to be the highlights of your career?
Creating and working with Giants Theatre Company is a real highlight for me. But of course, I’m also extremely proud of all of my children – and grandchildren.

What would your advice be to young artists hoping to follow in your footsteps?
To be honest, any career in theatre (at least for 99% of people) is a nightmare. Be prepared for that–whether it’s getting acting jobs, writing commissions, directing opportunities etc.–finding the funding and people who will believe in and take a risk on you is extremely hard. That being said, we have been able to find the most talented and dedicated creative team who have absolutely got behind this project and ensured that the story could be told in the best possible way.

Piece of Silk is currently playing at The Hope Theatre, Islington until 2nd July. Tickets are available here.