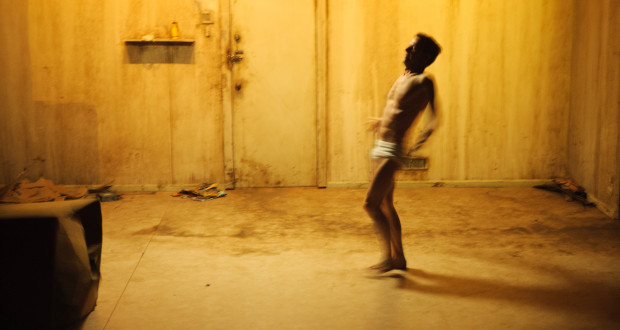 Give Me Your Love, Battersea Arts Centre – Review

Cons: The piece wanders self-indulgently a little, and the lack of visible facial expressions limits its ability to truly affect the audience.
Give Me Your Love, Battersea Arts Centre – Review

Pros: David Woods and Jon Haynes’ writing is seriously powerful at times, and their gentle humour is generally charming. Jacob Williams’ set is delightfully grungy. Cons: The piece wanders self-indulgently a little, and the lack of visible facial expressions limits its ability to truly affect the audience. MDMA and PTSD – two four-letter acronyms not generally associated with each other. Psychological instability and ecstasy do not seem the happiest bedfellows. But yet another acronym, MAPS (Multidisciplinary Association for Psychedelic Studies) is currently conducting research into MDMA-assisted therapy for Post-Traumatic Stress Disorder and Ridiculusmus have created a show about just&hellip;

An enjoyable, if not particularly memorable, hour of original, thought-provoking theatre that ruminates sensitively on a serious topic.

User Rating: Be the first one !
MDMA and PTSD – two four-letter acronyms not generally associated with each other. Psychological instability and ecstasy do not seem the happiest bedfellows. But yet another acronym, MAPS (Multidisciplinary Association for Psychedelic Studies) is currently conducting research into MDMA-assisted therapy for Post-Traumatic Stress Disorder and Ridiculusmus have created a show about just that: traumatised soldiers taking ecstasy.

At just an hour long, David Woods and Jon Haynes’ Give Me Your Love is a brief but thoughtful play, laced with a delectable, gentle humour. It meanders self-indulgently somewhat and it doesn’t leave one wanting more exactly, but it takes a weighty topic and ultimately creates a show that achieves Ridiculusmus’ aim of being both serious and funny.

It is undoubtedly an odd piece: a two-hander, in which the faces of Woods and Haynes (who star as well as write and direct) are never fully visible until the curtain call. Woods spends the entirety of the play with his head and torso shoved inside a battered cardboard box. He is Zach, a veteran of the Iraq war with a thick Welsh accent and an acute case of PTSD. Haynes is perennially just off-stage, multi-rolling as Zach’s wife Carol – whose voice drifts across the stage from an open cupboard door – and his friend Ieuan – who attempts to help Zach through the crack of a chained door by giving him ecstasy, playing him music, and chatting to him.

It is surprising just how expressive the flat, brown exterior of a cardboard box can be. As Woods sprawls on the floor and shivers in a corner in between bouts of frenzied distraction, he finds a powerful anguish from inside his box. It is a wonderfully physical, commendably weighted performance full of fear, confusion and shame. There is only so much emotion that can be engendered through voice and movement alone, however, and one does start to long for a human face to scrutinise.

Woods and Haynes’ script is thoroughly original, although there are hints of Beckett about it. It contrasts the light – exactly how does one go about concealing a class A drug in one’s underwear? – with the heavy – vivid, visceral descriptions of warfare in the Middle East. At its best, this mixture of the prosaic and the ominous is captivating, managing to find a profound, wistful and thoroughly Welsh humour. At its worst, however, it is a little contrived and tedious.

Jacob Williams’ dank, empty, basement-like set – apparently an apartment in Port Talbot – is complemented well by Marco Cher-Giband’s unobtrusive sound and Richard Vabre’s subtle lighting. The space can transform from a torture chamber, with deafening gunfire ringing from the walls, to an oasis with a delicate shift of light and the smooth introduction of birdsong.

Give Me Your Love is a show that provokes thought – thanks in part to its open-ended conclusion – but it is more mildly engaging than riveting. It takes an important subject and manages to make it both funny and serious, but it induces chuckles and pauses, rather than real laughter and true tears.