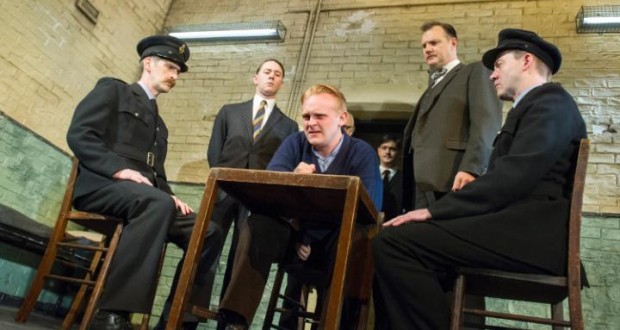 Cons: Finding any fault with Hangmen feels like nit-picking, but McDonagh’s style is not to everyone’s taste and the play’s ending feels slightly off-kilter.
Hangmen, Wyndham’s Theatre – Review

Pros: Martin McDonagh’s wicked sense of humour, the performances of David Morrissey and Johnny Flynn, and Anna Fleischle’s authentic set all combine to make Hangmen a must-see. Cons: Finding any fault with Hangmen feels like nit-picking, but McDonagh’s style is not to everyone’s taste and the play’s ending feels slightly off-kilter. It has been twelve years since Martin McDonagh graced the British stage with his writing but in all that time, he has evidently lost none of his charismatic verve. Hangmen, his new play that recently transferred from the Royal Court to the West End, is as gripping and&hellip;

Hangmen has had praise heaped upon from all sides and deservedly so. It’s one of the landmark shows of 2015: powerful, hilarious, and one-hundred per cent memorable.

It has been twelve years since Martin McDonagh graced the British stage with his writing but in all that time, he has evidently lost none of his charismatic verve. Hangmen, his new play that recently transferred from the Royal Court to the West End, is as gripping and as stylish as anything he has previously produced.

As any fan of his work for both stage and screen will tell you, McDonagh’s brand of jet black humour and stomach-churning tension is something of an acquired taste. In my humble opinion, though – and in most other critical views it seems – it is sublimely entertaining, and it is slapped all over Hangmen like thick paint. When combined with two enthralling central performances and Anna Fleishle’s deservedly award-winning design, it forms a cocktail as arresting as any lethal injection.

The year is 1965, hanging has just been abolished and Harry Wade (David Morrissey), chief hangman and landlord of a grimy Oldham pub, is out of a job. He has nothing left to do but pull pint after pint for his sodden crowd of day-drinking regulars and rail against his nemesis, the famous Albert Pierrepoint, in local newspaper articles.

This alcoholic idyll is upset by the arrival of a ‘vaguely menacing’ – his own words – Southern stranger (Johnny Flynn) who, with his non-stop, faux-naïve babble and his fearless anti-Northern pronunciations, instantly rubs the straight-talking Harry up the wrong way. When this stranger begins cruelly manipulating Harry and his family, his motives opaque but somehow connected to a botched execution of two years previously, it becomes clear that he has stopped by for more than just a pint and a packet of peanuts.

Both Morrissey and Flynn excel. The latter dazzles with his rapid-fire, stream-of-consciousness chatter, and his slinky, prowling movements, but it is the former whose character development feels truly three-dimensional. Morrissey’s Harry begins as a big, bruising bully, literally towering over his drunken clientele, but as events slowly conspire against him over the course of the play, the psychological toll that 233 executions have had on him is revealed.

Elsewhere, there is fine work from Sally Rogers as Harry’s beleaguered, gin-soaked wife Alice and from Bronwyn James as his sulky daughter Shirley. John Hodgkinson and Andy Nyman also deserve credit, the latter for his fidgety, anxious Syd – Harry’s erstwhile assistant – and the former for a gloriously unhurried comic turn as the one and only Pierrepoint, who looms over Harry just as Harry looms over his bar-flies.

Although, as I have said, McDonagh’s humour is not to everyone’s taste, his writing is undoubtedly the star of the show here. The rhythmic authenticity of his dialogue, the truly original characters he draws, the beautifully layered plots he constructs – all combine in Hangmen to form a near-perfect whole. Indeed, I find it difficult to believe the reports of McDonagh’s disdain for the theatre when he produces plays like this one.

My only small annoyance is that the play’s finale denies the audience a satisfactory explanation of events. It is very much the point, of course – McDonagh is making an oblique statement about the fallibility of the justice system and the senselessness of capital punishment – but it does somehow tarnish the play’s precision and poise.

I would also hesitantly question whether a play about capital punishment has much relevance to 21st century Britain, where the death penalty has been non-existent for half a century. On reflection, however, Hangmen has just as much to say about violence and retributive justice – both eternally relevant themes – as it does about state execution. My only true sadness is that I do not have another 500 words to heap praise upon McDonagh’s latest play.