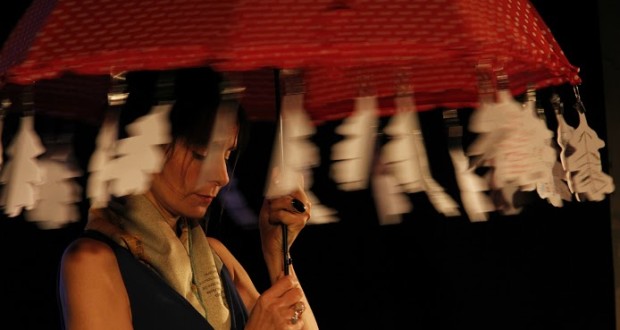 Pros: Tons of audience participation! (Great if you’re into it!)

Cons: Tons of audience participation. (Not so great if you’re not.)
The Baba Yaga Show, The Crick Crack Club at Soho Theatre

Pros: Tons of audience participation! (Great if you're into it!) Cons: Tons of audience participation. (Not so great if you're not.) The Crick Crack Club, a London-based performance storytelling organisation, presented The Baba Yaga Show as a one-night engagement at the Soho Theatre. The performance was held in the Soho Upstairs, a black box space with maybe 70 seats. On this particular day, the lift was out of order, and since there are quite a few stairs, it may not be a great choice for anyone with mobility problems (or, purely hypothetically, anyone with very sore hamstrings after one&hellip;

An unusual theatrical experience that is great fun if you're willing to jump in headfirst.

The Crick Crack Club, a London-based performance storytelling organisation, presented The Baba Yaga Show as a one-night engagement at the Soho Theatre. The performance was held in the Soho Upstairs, a black box space with maybe 70 seats. On this particular day, the lift was out of order, and since there are quite a few stairs, it may not be a great choice for anyone with mobility problems (or, purely hypothetically, anyone with very sore hamstrings after one too many high kicks in dance class).

The Baba Yaga Show runs for 75 minutes with no interval, and involves simply one woman (Xanthe Gresham) telling four Russian fairy tales involving Baba Yaga, the “super-witch, much aligned deity, über-goddess, or crone” that is described as “Russian folklore’s greatest character.” Unlike most fairy tales, this show is intended for adults, with the press release specifically stating that audience members should be at least 14 years old. That being said, there is no overtly “adult” content, and I can only assume that the age restriction is because Gresham has tailored her storytelling style for adults rather than for children.

Gresham is an excellent storyteller, committing 110% to her performance and painting vivid pictures in the minds of the audience. Her stories are both familiar and strange, classic fairy tales with a Russian twist. They have all the darkness of the original Grimm tales, but Gresham tells them with humour. She is multi-talented, using a variety of voices and mannerisms to create different characters. Besides playing Baba Yaga, she embodies everything from innocent children to evil stepmothers, magic dolls to talking frogs, and sandwich-stealing cats to silk-spinning cows. She also incorporates music into her storytelling to great effect, using both her voice and an accordion.

What makes Gresham unique, however, is her effortless way of connecting to her audience and making them part of the storytelling. She casts the crowd in turn as her props, accomplices, chorus, and even co-stars. Several people (including myself) were pulled on stage and asked to play a role in the story. As a warning to readers who suffer from stage fright, Baba Yaga’s victims are not limited to those sitting in the front row.

The more you are willing to get involved, the better the overall experience will be. I was in a terrible mood when I reached the theatre, and at first I was a bit reluctant to join in, but my fellow audience members were so into it, and Gresham’s enthusiasm was so infectious, that I soon found myself completely sucked in. My boyfriend, on the other hand, told me afterwards that while he had a great time, he would have enjoyed it more if he hadn’t spent the entire show in fear of being pulled on stage.

The technical elements are very bare-bones, almost nonexistent. There is no set, only a table with a few select props. The majority of the props are mimed by Gresham, and she (along with the audience) creates the sound effects. This simplicity, far from taking me out of the story, actually forced me to completely engage my imagination and facilitated the creation of the grand, magical and occasionally very bizarre images that Gresham painted so beautifully with her words.

Artist: Xanthe Gresham
Booking Link: http://www.sohotheatre.com/whats-on/crick-crack-club-fairytales-for-grown-ups/
Box Office: 020 7701 0100
Booking Until: This particular performance was a one-off, but next up in the Crick Crack Club’s storytelling at Soho Theatre season is Fairytales for Grown-ups: The White Bear King + Tatterhood. For more information or to book tickets, visit http://www.sohotheatre.com/whats-on/crick-crack-club-fairytales-for-grown-ups/

Previous: 1992 and Over There, Blue Elephant Theatre – review
Next: Me and Mr C, Ovalhouse Theatre – Review