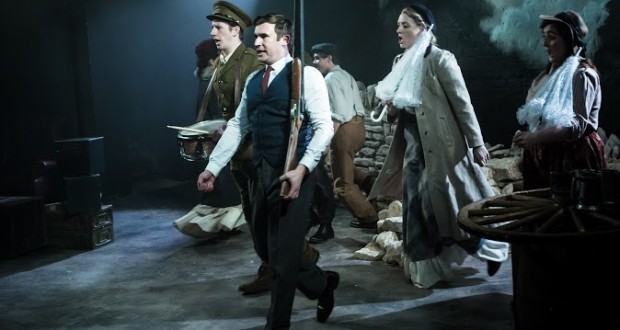 Pros: Some beautiful music and excellent performances make this is a very enjoyable night.

Cons: There are just too many threads within this show, which never feel like they are appropriately drawn together.
The White Feather, Union Theatre – Review

Pros: Some beautiful music and excellent performances make this is a very enjoyable night. Cons: There are just too many threads within this show, which never feel like they are appropriately drawn together. Under a railway arch, just down the road from Southwark station, sits Union Theatre. This slightly ramshackle, but very endearing space somehow seems like the perfect setting for the The White Feather, a new musical centering around Georgie Briggs, whose brother is killed for deserting during WWI. With the occasional rumbles of trains above, this show tries hard to have a deep emotional impact. But whilst&hellip;

Despite some excellent performances and some really lovely songs, this sweet show is let down by a script which is trying to be more complex and complicated than it can manage.

Under a railway arch, just down the road from Southwark station, sits Union Theatre. This slightly ramshackle, but very endearing space somehow seems like the perfect setting for the The White Feather, a new musical centering around Georgie Briggs, whose brother is killed for deserting during WWI. With the occasional rumbles of trains above, this show tries hard to have a deep emotional impact. But whilst the music and the performances urge the audience to have a real connection with the characters, something is just missing. And I fear that something is a stronger script.

I’m not saying that the script has nothing going for it – indeed there are some very touching moments – but it feels like Ross Clark has tried to pull far too many threads into this one show, resulting in a messy narrative lacking in real oomph. There are just too many plot lines and not nearly enough time or expertise to explore them all: multiple love stories; extraneous characters who I’m sure were designed to highlight the other issues of the time but don’t really succeed in doing this; and the bringing in, right at the end, of the issue of women’s suffrage.

However, the music at the foundation of this show is lovely. It has a beautiful, rural quality entirely in-keeping with the setting of the show, and also manages to draw in themes which feel historically appropriate. Especially notable were: ‘Set Them in Stone’, an emotive piece about the war memorialisation of those lost in The Great War; and ‘True Suffolk Man’, which weaved through the show and excellently examined the hypocrisy of what we consider a man to be.

When the entire cast was singing the sound produced in the small theatre space was very powerful, and one voice often stood out. Katie Brennan, despite playing what felt like an almost unnecessary character, made a real mark on me with her powerful voice which shone through. Also notable is Georgina Briggs, played well by Abigail Matthews, whose voice managed to come across as both suitably young for the beginning of the show, but developed and aged as her character did the same.

The music had some other nice touches, including a disorganised, anxious theme which developed as Harry Briggs descended further and further into mental ill-health. The music wasn’t the only thing trying out some interesting techniques: the reading of a censored letter from Harry Briggs’ home was accompanied by equivalent blackouts of the character on stage; and the dramatic denouement also saw the show bring in the 2006 parliamentary apology for the treatment of those considered to have deserted in WWI. These were nice touches, but somehow they almost felt like tag-ons in an otherwise fairly traditional musical.

I think it’s also worth noting that the design aspects of this show, which are simple yet elegant. There was none of the over the top lighting design I so fear with musicals, just lots of naturalistic tones which complemented the sepia photo inspired backdrop. The costume design equally plays to this, bringing in only those tones which the time and space of the piece would warrant, and in doing so providing a calming visual experience despite the sometimes melodramatic over-activity of the story.

I enjoyed my evening, and especially enjoyed some of the individual performances, both on and off stage – I just wish they’d had stronger, better executed material to work with.

Previous: The Love of the Fireflies (El amor de las luciérnagas), The Pit at the Barbican – Review
Next: She Called Me Mother, Stratford Circus Arts Centre – Review