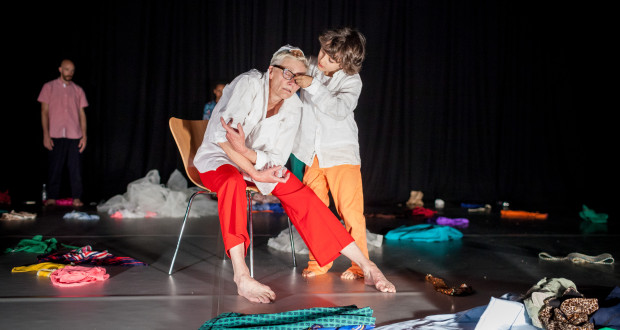 Pros: Creative and thought provoking Cons: The first half lacks pace. I would never have associated Euston with being a dance hub in London. However, within a stones throw from this busy train station lies The Place; which is the UK's premier centre for contemporary dance. As I approached and entered this breath-taking building I had flashbacks to my own drama school days. I was thrilled to see that it was bustling with activity. The Place is a purpose-built centre with an ethos to unite dance, creation and performance. It houses some of the best studios in London. As I&hellip;

An entirely original dance piece which explores the stages of life

I would never have associated Euston with being a dance hub in London. However, within a stones throw from this busy train station lies The Place; which is the UK’s premier centre for contemporary dance. As I approached and entered this breath-taking building I had flashbacks to my own drama school days. I was thrilled to see that it was bustling with activity. The Place is a purpose-built centre with an ethos to unite dance, creation and performance. It houses some of the best studios in London. As I stood at the bar, I sensed I was surrounded by dance students, dance lecturers and all of their family and friends. This was lovely, yet it did make me feel that I was about to watch a high school production.

The Place works with numerous dance companies from across the world. It presents over 200 performances a year. It’s current show Staging Ages is presented by award wining dance company H2DANCE.  Staging Ages is a new work which explores how we meet, and interact across the generations. It features just five performers aged between 9 and 65. From being hyperactive teenagers to curious three years olds, from discovering your sexuality to feeling lost, this unique and original show sets out to demonstrate all of the different aspects of life through movement. It’s an interesting premise. The main auditorium where the show was performed was a vast, warehouse like space with black walls. It had a white floor covered with hundreds of random pieces of clothing which represented different life stages. As the piece opened the cast were already on stage, looking across at us. This was a nice touch, as it gave this show an additional layer of intimacy.

The choreography was by Hanna Gillgren and Heidi Rustgaard and had been developed over a series of residencies in six venues across three countries. I did find some of the choreography, especially in the first half, a bit like dancing by numbers. There was a lot of repetition which I didn’t connect with. As each different age ended the cast would walk to the back of the performance area, to then start a dance for another age. This resulted in the pace feeling constantly broken. I would’ve preferred for the ages to be woven into one core piece instead of 30-40 separate segments.

However, in saying that, the piece really did come into its own in the second half. I found it thrilling and a joy to watch. The sexy and agile Darren Anderson (35) moved across the stage beautifully. I found some of his stories hit home with me personally.  The more I watched him, and his body, the more I felt he was portraying several parts of my own life. Dr Emilyn Claid (65), a pioneer of contemporary dance, was also a joy to watch. Dancing as the ‘oldest age’ she was the glue of the show for me. She moved around the stage with grace and ease. Her performance of 85 to 103 was sad, touching and incredibly moving. When I am 65 I want to be able to move around like Claid!

Laura Doehler (33) carried herself well across the whole 60 minutes. Her portrayl of 33, and the ongoing stress and pressures that come with this age, was breath- taking. The younger generation, represented by Sean Hodgson (9) and Ella Sophoclides (15), were dazzling. Hodgson provided the comic relief of the show. His monologue of becoming a middle class Tate member was a personal highlight. Sophoclides moving portrayal of a hormone trapped 13 year old was beautifully executed. Another hero of this modern dance piece was the music by Sylvia Hallett. It was creative and captivating, and helped support the cast’s performances magnificently.

Sadly this show was only on for 2 nights, but The Place and H2DANCE are ones to keep an eye on.