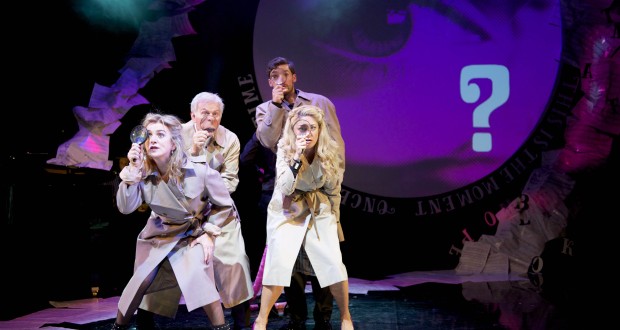 Cons: Pace lacked at times.
Pure Imagination, St James Theatre
Pros: Strong vocals, wonderful songs and creative direction. Cons: Pace lacked at times. Going to the St James Theatre is always such a treat. I've only ever seen shows in their studio, so imagine my delight when I was ushered into their main theatre for the first time. The space is magical and the perfect setting to host the world premiere of Pure Imagination - a musical tribute to musical theatre royalty Leslie Bricusse. Spanning over six decades Briscusse's back catalogue of songs, from both musicals and the silver screen, is phenomenal. Song after song is a delight and&hellip;

Going to the St James Theatre is always such a treat. I’ve only ever seen shows in their studio, so imagine my delight when I was ushered into their main theatre for the first time. The space is magical and the perfect setting to host the world premiere of Pure Imagination – a musical tribute to musical theatre royalty Leslie Bricusse. Spanning over six decades Briscusse’s back catalogue of songs, from both musicals and the silver screen, is phenomenal. Song after song is a delight and although you may not recognise all of them (I didn’t!), the music across this 2 hour production is slick, powerful and captivating. The fact that the man himself, and Joan Collins, were sitting directly in-front of me was an added bonus!

It’s classic musical review format with the cast moving around the stage weaving a light story in and around all of the wonderful songs and lyrics. The cast is a strong ensemble of 5 actors who play The Man, The Woman, The Boy, The Girl and The Joker. Its not hard to see why Dave Willets, who plays The Man, has been one of the UK’s leading musical stars for over 25 years. His voice is like rich velvet and every song he belted out was goose bump inducing. I especially loved his rendition, and comic acting, of one of the greatest Bond theme songs ever written – Goldfinger! Siobhan McCarthy as The Woman is also stellar with some serious lungs on her. Hollywood/Two Timer, a duet she performs with Willets, was a personal highlight and McCarthy’s performance is dazzling. Niall Sheehy as The Boy also gives a strong performance, although if truth be told I find him a bit wet behind the ears at times. Like the older generation, Sheehy’s voice is second to none and his delivery of my favourite Bond theme song of all time, You Only Live Twice, is heavenly. The Girl is played by Julie Atherton and she is mesmerising. Atherton’s voice is impressive and her Can You Read My Mind, from Superman, is touching, subtle and heartfelt. Keep an eye out for Atherton’s wonderful facial expressions and comic timing, they are enchanting. The glue that holds these 4 great actors together has to be Giles Terera as The Joker. From the moment he steps onto the stage you are gripped by not only his fluid voice, but his agile body and conviction of performance. Terera’s Candy Man is flawless and his What Kind Of Fool Am I? towards the end of Act 2 almost had me in tears. When performing solo all 5 actors stand out in equal measure, but when they all sing together for songs like The Pink Panther the harmonies are off the chart and the acting is enthralling.

In terms of pace, the show flows well and its engaging from the offset yet I did feel that Act Two perhaps had too many ballads which did make the second half wain for me a tad.  I did feel at times that I wanted more plot or explanation as to the links between all of the characters. Was it a retrospective of a relationship from naive beginnings to sad end? It wasn’t clear. In saying that I loved trying to work it out while my senses relished every note sung.  Director Christopher Renshaw has done a wonderful job with this production and I found his direction subtle, creative and fun. Musical Director, Michael England, and his orchestra deliver some of the best sounds I’ve heard in a while and work with and compliment the cast perfectly.

This show may not be to everyone’s taste, but the massive cheers and standing ovation at the end of Act Two are testament to Bricusse’s genius and abundant talent of this cast.

Previous: Young Men, Sadler’s Wells – Review
Next: The Love of the Fireflies (El amor de las luciérnagas), The Pit at the Barbican – Review