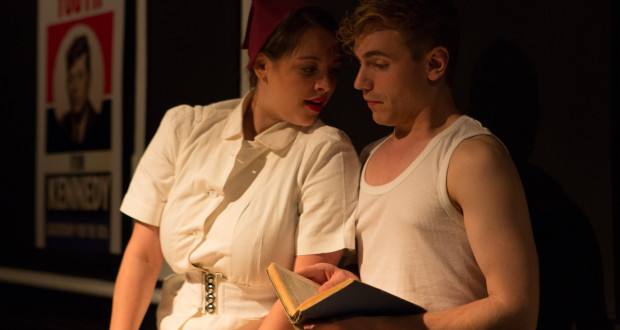 Pros: A talented cast who bring a steamy musical to life.

Pros: A talented cast who bring a steamy musical to life. Cons: The space was fairly cramped, making it difficult to see at times. The Anchor and Hope Pub in Islington has a secret: above it is a small intimate theatre called the Hope. The pub is bright and friendly with really great drink prices. The bell that normally means last orders was the sound that let us all know that the house was open and the show was ready to start, and so we climbed the narrow staircase to the auditorium. The space where the show was being&hellip;

An easy to watch musical tale, filled with passion and steam.

The Anchor and Hope Pub in Islington has a secret: above it is a small intimate theatre called the Hope. The pub is bright and friendly with really great drink prices. The bell that normally means last orders was the sound that let us all know that the house was open and the show was ready to start, and so we climbed the narrow staircase to the auditorium.

The space where the show was being performed was a black, windowless room which reminded of me of a typical school drama studio: it was intimate but very warm and cramped. Even though it was a small space, I struggled to see a large part of the action due to people in front of me. Noise from the outside was often heard in the auditorium, but I found it blended well. I personally found that the music, most of which was provided by a piano in the corner of the room, was a little too loud for the size of the venue. However, that was mainly drowned out as I was drawn into the scandalous sex scenes that were happening practically on top of me.

Hello Again is a cult musical featuring daring adventures of sexual fantasy in real life situations. It goes from decade to decade, thrusting the audience into a thousand bedrooms and one cinema. It begins during WWI and ends up somewhere close to present day. The structure of this musical tale is somewhat unclear: the only indication you get is a single poster in the background which changes with the times. It took me a little while to get into the story, but when I did I found it very charming, funny and easy to watch. Hello Again is definitely a show for to watch without getting deep or emotional. As I said before, the structure was a bit unclear, but there was fantastic interlinking dialogue that pulled everything together by the time you reached the end.

In 2001 when Hello Again was last in London, it was performed with a cast of ten. Only knowing this after I watched the performance, I developed a great amount of respect for the multi-rolling cast of this production, which was reduced to five. Thea Jo Wolfe, Adam Colbeck-Dunn, Isabella Messarra, Joshua Leclair and Miles Western all of whom played two characters each and change the set when needed. The whole cast worked incredibly hard during the show: they sang, they danced and got into some very compromising positions with a great deal of bare bottoms being flashed. The actors looked very much at ease with each other, which is obviously good when you’re getting up close and personal.

The set mainly consisted of four black boxes which became everything from cinema seats to hospital beds, all with the magic of a bed sheet. Also hanging around us was a variety of men and women’s white underwear and if you didn’t read the program, you could use that as indication of where this show was going.

Overall, the show was kind of like a one night stand: easy, charming and funny, but I found no real attachment to the characters or storyline. There were some heartfelt moments but the thing that separates this musical from the rest is the passionate and steamy portrayal of sexuality throughout the decades. All of the cast are talented and worked extremely hard to make this show come to life. They used a variety of tactics to achieve this, many of which I can’t write down due to explicit content. You will definitely need a cold pint after the show to cool down after this steamy show at the Hope theatre.

Leto is originally from the Midlands. He came to London three years ago to study Drama and performance at London South Bank University, where he is currently in his third year and preparing to go on to do a Masters in theatre directing. He loves seeing a variety of different theatre from musicals to straight plays, but does have a soft spot for interactive and immersive theatre. Other interest include volunteer work at local community and youth centres.