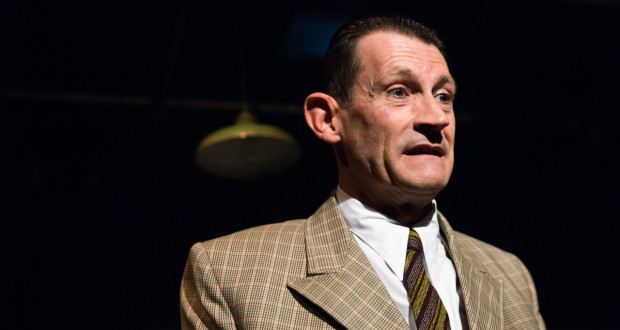 Pros: Strong acting, thought-provoking writing and an interesting perspective on a familiar subject, all in a lovely venue.

Pros: Strong acting, thought-provoking writing and an interesting perspective on a familiar subject, all in a lovely venue. Cons: The monologue format limits the emotional impact of the story. Adapted from Joseph Roth’s book The Emperor’s Tomb, 1938: Hitler Takes Vienna tells a familiar story from what will be for many a different perspective. The play is set on the eve of 11 March 1938, as the German army marches into Austria. The Austrians have been told not to defend their borders. In a deserted bar in Vienna, Baron Trotta is alone. The barman, waiter and cashier have all&hellip;

This play is skillfully staged and performed; a strong and well written story about the past, clearly relevant to today.

User Rating: 4.7 ( 1 votes)
Adapted from Joseph Roth’s book The Emperor’s Tomb, 1938: Hitler Takes Vienna tells a familiar story from what will be for many a different perspective. The play is set on the eve of 11 March 1938, as the German army marches into Austria. The Austrians have been told not to defend their borders. In a deserted bar in Vienna, Baron Trotta is alone. The barman, waiter and cashier have all fled. Outside we hear the sound of marching feet, shutters closing and people singing the anthem of the Nazi party. Baron Trotta reaches behind the bar and brings out a full decanter. “I can help myself” he says. “Others too” – indicating the soldiers outside – “are helping themselves”.

Set on the eve of the Second World War, the play looks back on the complex events that have led to this moment: the atrocities of the First World War and their impact on what we now know as the interwar years. The story is told through the reminiscences of just one character: Baron Trotta, a Slovenian living in Vienna who grew up in the world of the Austro-Hungarian Empire. The play is presented as an hour long monologue where Trotta recounts his past, including the friends, family and wife he has gained and lost; stories all linked in some way to the consequences and politics of war.

The writing has an elegant feel to it. The comments and reflections on war are profound and speak strongly to a modern audience, particularly at a time when the impact of war on the lives of ordinary people is a story once again at the heart of Europe. Actor David Bromley gives a strong, very enjoyable performance as Trotta. However, I felt the monologue format at times limited the emotional impact of the play. Trotta’s relationship to others is the crux of the narrative: it’s the way through which the audience puts historical and political references into a meaningful context, which writer Howard Colyer enables very skillfully. Yet, we’re never given a chance to properly meet these characters on stage. They are implied or referenced through snippets of accents or exaggerated mannerisms, but that doesn’t bring us to the heart of these relationships and for me, this lessened the deep emotional impact which I believe the play could have achieved.

What did work really well was the sense of tension and anxiety which built up gradually throughout the performance. At the beginning Trotta appears in control: despite the turmoil outside, his manner is relaxed, almost casual. As the story unfolds and Trotta’s reflections become deeper, we see his anxiety grow. This is supported by the sound, lighting and staging, all of which work together wonderfully to make palpable the tension underpinning the action on stage. It’s a snap-shot of what it must have felt like to live through events at the time.

As a venue, the Jack Studio Theatre could not be better. A black box performance space with no distractions, it allows the audience to be fully immersed in the world of the play. Adjoined to the friendly Brockley Jack pub you could spend a very enjoyable evening in this venue with a pre or post show meal or drink. 1938 highlights a perspective on the events surrounding the two World Wars that I have personally not often seen dramatised. If, like me, you’re more familiar with the English, French and German experiences at this time, then this play will offer you an insightful exploration of the parallels and differences for those within Central and Eastern European countries.