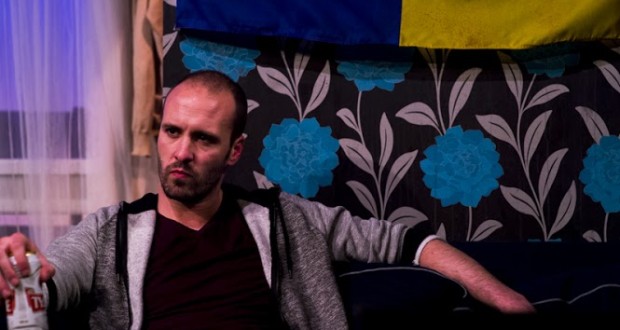 Pros:&nbsp;Natural dialogue, with funny&nbsp;sibling banter. Cons: The plot progresses sluggishly with twists packed into the first and last five minutes. Before I saw rock paper scissors, my knowledge of Romanian culture was poor to non-existent – a few Champions League football matches with Steaua Bucharest and some stereotypes about Roma traditions gleaned from a certain culturally insensitive programme, that I promise I’ve only watched for five minutes. But this play shows a different side to the people of this Eastern European country, telling the story of two brothers Mihai (Tice Oakfield) and Roma (Mateo Rufino) trying to make it&hellip;

Not enough development throughout the piece, though it has potential - and the brief glimpses into Romanian culture are fascinating.

User Rating: 4.36 ( 8 votes)
Before I saw rock paper scissors, my knowledge of Romanian culture was poor to non-existent – a few Champions League football matches with Steaua Bucharest and some stereotypes about Roma traditions gleaned from a certain culturally insensitive programme, that I promise I’ve only watched for five minutes. But this play shows a different side to the people of this Eastern European country, telling the story of two brothers Mihai (Tice Oakfield) and Roma (Mateo Rufino) trying to make it on their own in London. With their landscaping business failing, and Mihai’s girlfriend Aine (Amy Molloy) falling pregnant with either Mihai or Roma’s child, tensions run high and Mihai turns to Charlie (Bruce Langely) the clever but naive son of one of his clients to help him improve his lot.

From the outset, the relationship between the brothers feels real: their bickering seems both universal to all families and specific to them as Romanians living in London, far away from their family and culture. But once the admittedly naturalistic dynamic is set up, it doesn’t really go anywhere. The two main events in the play happen near the very start and the very end so all that happens in between is stewing, and arguing and reflecting on the same things with very little else actually happening. The play ends up feeling more like a fly-on-the-wall documentary than a piece of drama.

The performances are mainly strong but the prevalence of shouting and general negativity means the cast are somewhat limited by their roles. Rufino’s Roma is definitely the standout of the group with his character showing significant depth thanks both to Nikora’s development of his character and Rufino’s portrayal. There are areas, however, left woefully under-explored, like Mihai and Charlie’s relationship, as well as that of Mihai and Aine – it’s hard to hope for them to have a happy ending (as desperately as Aine seems to want them to) when it’s not even clear why they are together. Even Mihai and Roma’s relationship, the focus of the play, isn’t explored much beyond the surface and contains shortcuts which left me feeling cheated.

The set of Mihai and Roma’s flat feels real and lived-in and small details, such as the way different characters empty a bucket that collects from a leaky sink pipe and how Roma keeps his beers in the wardrobe as an old habit from adolescence when he would hide them from his parents, make it come alive. Designer David Shields has put just enough props and set pieces in to make it feel like we are in a real domestic space without creating fuss for the actors or encourage distracting ‘stage business’.

The main reason I felt disappointed by rock paper scissors is because it had so much potential to be a unique and exciting play; the characters were complex and intriguing, the dialogue felt naturalistic and the set up works. Sadly, the play doesn’t have enough going on – the plot is static and the fascinating characters never really develop. Still, the play is interesting and this writer clearly has a talent and something to say about the world but this piece isn’t quite there yet.

Previous: Learning How To Die, Ovalhouse – Review
Next: Macbeth, The Rose Playhouse — Review