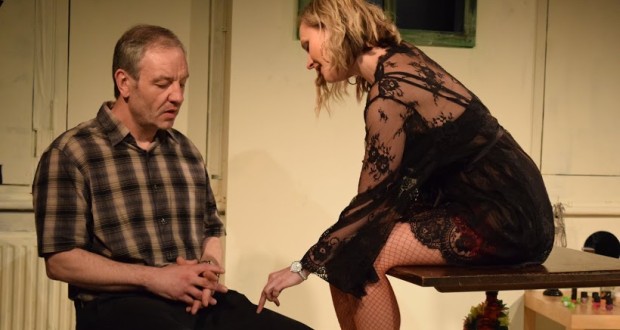 Cons: As an audience member, I felt the purpose of the piece was unclear.
Firefly Heartbeat, The Hope Theatre – Review

Pros: Gripping, intriguing and emotive. Cons: As an audience member, I felt the purpose of the piece was unclear. Set in Sydney Australia, Firefly Heartbeat sees the meeting of two apparent strangers named Stuart (James Sutherland) and Madeleine (Kellie Jane Walters). Madeleine is a sex worker and Stuart, a paying client. Except Stuart doesn’t want the usual services, he just wants to talk. Claiming to be researching for his next book Stuart is full of questions, but as the conversation develops we realise that these two people have a shared past. With a cast of only two, this production&hellip;

Set in Sydney Australia, Firefly Heartbeat sees the meeting of two apparent strangers named Stuart (James Sutherland) and Madeleine (Kellie Jane Walters). Madeleine is a sex worker and Stuart, a paying client. Except Stuart doesn’t want the usual services, he just wants to talk. Claiming to be researching for his next book Stuart is full of questions, but as the conversation develops we realise that these two people have a shared past.

With a cast of only two, this production relies highly on the strength of its actors. Madeleine is a tortured soul who’s determined to keep up a playful, in-control exterior, despite her damaged past. There is huge depth to the character and Walters does an amazing job of conveying a cocktail of different emotions, often simultaneously.

Sutherland’s portrayal of Stuart is equally impressive but in a completely different way. His tone is so gentle and caring that during the first part of the play he becomes quite endearing. Through Edward Davenport’s masterful writing, we watch as Madeleine begins to soften towards Stuart and the relationship takes on an almost paternal dynamic. This makes Stuart’s true identity all the more disturbing but interestingly, Sutherland’s tone remains consistent throughout the revelation when it finally comes. The mild, calm nature of his delivery is the same but the effect morphs from endearing to unnerving with every line.

From a technical perspective, both actors deliver a huge amount of lines, including lengthy monologues, only leaving the stage for a few seconds during the course of the play. The performance is absolutely non-stop and full of emotion. Both Sutherland and Walters should be commended for delivering it so powerfully.

The whole play takes place in Madeleine’s bedroom, consisting of a bed, table and nightstand strewn with clothes and personal belongings. There is relatively little use of lighting or sound effects, however the position of The Hope Theatre itself provided some real-world street noise which suited the setting perfectly. During a particularly tense moment the stage lights are cut, leaving the audience in the dark. I felt that the timing of this was absolutely perfect as it really heightened the tension in the room. The darkness only lasted a few seconds but I felt genuinely uncomfortable waiting for the lights to return. Had the play featured more audio-visual effects they could easily have become a distraction and lessened the impact of the characters’ conversation. This production got the balance just right.

Director Mario Demetriou uses the small performance space to great effect. As power shifts begin to occur between Stuart and Madeleine, this is reflected in the physical dynamics of the two characters. At first Madeleine is confident and stands whilst the nervous Stuart sits in a chair. Interestingly, when the situation reverses Demetriou chooses to keep Stuart sitting. In fact, during the height of his emotional power over Madeleine Stuart is put in a physically vulnerable position, which only makes the calmness of his tone more sinister. The claustrophobia of the set also works particularly well within the theatre’s small auditorium. There is an uncomfortable feeling between the two characters to varying degrees throughout the play, and our close proximity allows this to extend into the audience.

Whilst Firefly Heartbeat is gripping, dramatic and extremely moving, the dark plight of the two characters makes it difficult to categorise as pure ‘entertainment’. This is a brave subject matter to take on and it’s done in a skilful, well-crafted way. Nevertheless, a piece of this nature is often designed to leave the audience with a strong message, or to raise questions for them to think about afterwards. In the case of Firefly Heartbeat the content was so realistic and raw that I felt that I’d just witnessed a section of two very unfortunate lives. Other than the emotion of watching it, I wasn’t sure what (if anything) I was supposed to take away from the experience.

This is a powerful, unflinching piece of drama, which draws you in and grips you till the end. It is cleverly written and the acting and direction are fantastic. Theatregoers should be prepared for a challenging subject matter and a very memorable evening.